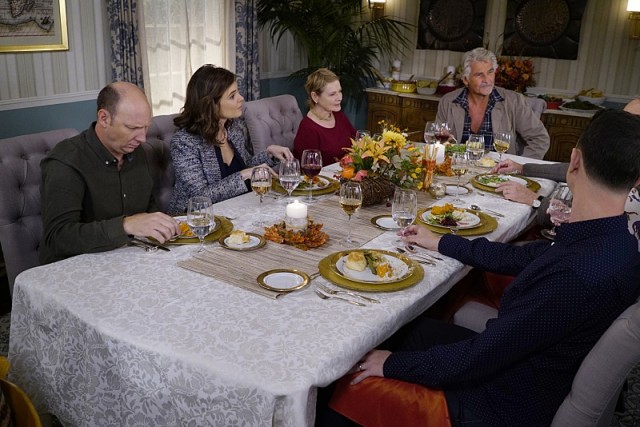 “Godparent Maze Mexican Farts” feels like a completely different show than the seven episodes of Life in Pieces preceding it. Centered around a single event, Thanksgiving, “Godparent Maze Mexican Farts” uses its fractured storytelling composition to its advantage for once, turning out an impressive holiday episode as a result. Consistently amusing and surprisingly poignant at times, “Godparent” tamps down its worst habits (for the most part, at least) in a “family” episode that takes shape in unpredictable ways.

From the start, I was hoping Life in Pieces would evolve into this form of storytelling, which may explain why I’m so fond of an episode that ultimately builds to a long, extended fart joke. The show’s comedic priorities mostly remain in the same place they’ve been for the past month, relying on awkwardness and butt jokes for the majority of its punchlines. Save for an extended montage of Tim and Sophia in a local bodega, the jokes in “Godparent” don’t differ much from those of previous episodes. Everything around those jokes, however, feels fresh and carefully constructed in a way previous episodes have severely lacked. Even something as simple as playing around with the 12-hour window all four stories exist in offers something new and creative, a spark recent entries have severely lacked.

However, there’s a lot more than just temporal creativity at play in “Godparent”; as each story reinforces a bond between two unexpected members of the family – Tim and Sophia, Greg and Jen, John and Samantha – by isolating them from the shared setting of Thanksgiving. Life in Pieces overlaps these stories in clever ways, too: in the final segment (where Colleen serves everyone cauliflower rice), Greg’s still wearing the make-up he had on in the first segment (done by Sophia, during her brief modeling phase), offering a little visual callback the episode doesn’t have to explicitly call attention to. Clever touches like that are abundant in “Godparent,” as it moves from story to story, and as those little overlapping moments begin to form a picture of the whole episode, Life in Pieces begins building towards a sense of familial unity it’s only hinted at since the pilot.

The Thanksgiving table is really the first time we’ve seen all these characters in the same room since the pilot; and given the nature of TV scheduling, we can’t really expect that to happen on a regular basis. But doing so offers Life in Pieces with so many more opportunities to drive connective threads between its four stories, it’s something I wish the series would figure out how to do more often. The family sharing the holiday at John and Joan’s house gives “Godparent Maze Mexican Farts” a foundation previous episodes have direly lacked, left to float in the wind, relying on their comedic merits to get by (which as this episode even proves, are limited to visual gags and bodily fluid jokes).

There’s just an overall sense of ambition tied to the story of “Godparent” I haven’t felt with previous episodes: the structure of four random, disconnected stories allows for diverse storytelling, but ultimately, only succeeds at building thin characters with no sense of pathos. The emotional bonding occurring in each of these four stories is something Life in Pieces needs to build on, as the stories themselves do in this episode: each story is concerned with protecting the journey of the next generation (save for Colleen and her gas-inducing casserole – it’s still Life in Pieces, after all), and how bonds are formed between family members during that journey. The setting of Thanksgiving may be a convenient one to bring everyone together, but doing so reveals just how badly Life in Pieces needs to do it more often. The more these characters are in proximity to each other, the more chances Life in Pieces can use its storytelling gimmick to its advantage, building some much-needed emotional resonance into the young comedy.