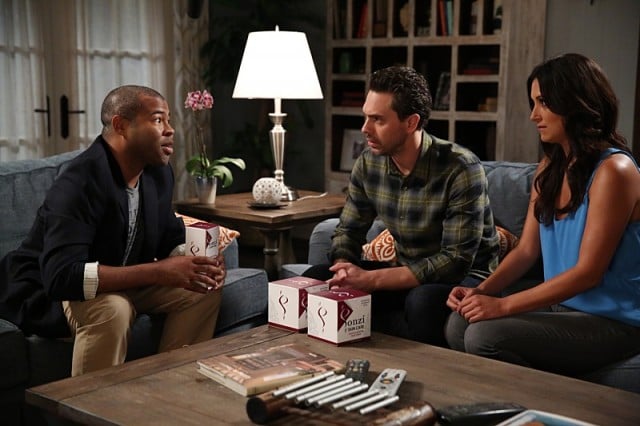 Life in Pieces only seems capable of finding pathos in one of its four stories in each episode. Every half hour feels like one idea and three jokes somehow stretched out into four completely isolated stories, which just makes for disjointed, thoroughly superficial television. “Ponzi Sex Paris Bounce” is nothing different for Life in Pieces; any hope that its new time slot and back-nine order would kick the show’s creative capacity into higher gear is gone by the time the installment’s second story kicks in (essentially one long lube joke).

The only thing Life in Pieces has done consistently is present itself as comedy for boring, privileged white people.”Paris” is an entire story built around a bad hairdresser Heather and Joan both go to, and their attempts to ‘break up’ with her. That’s literally all there is to it: the script doesn’t even take advantage of guest star Alex Bornstein, which would’ve been the easiest path for Life in Pieces to make this story feel relevant. Nope; instead, we get five minutes of Heather lying to a hairstylist about moving to Paris, a story preceded by a five-minute long joke about how awful/impossible sex is for parents of a newborn, a joke that has all the legs of said infant involved in the story.

To counter this weightlessness, “Ponzi Sex Paris Bounce” does offer up one slice of a story with some meaning. “Bounce” gives Tim’s character some much-needed development in this episode, painting him as a goofy father struggling to reconcile the maturation of his children, particularly his daughters. Sure, this story doesn’t do much but play off the conventional trappings of “daddy’s girl” stories, but “Bounce” compounds its simplicity in a way that’s satisfying, offering us scenes with both Samantha and Sophia beginning to show their independence. While a sad puppy dog face over his daughter wanting to eat dinner alone with her friends doesn’t do it for me, seeing Tim smile while Samantha and her friends watch Alien, and Sophia pretending to fall asleep to avoid giving him a kiss goodnight, gives him an empathetic dimension he didn’t have earlier.

Of course, this is all happening while a story featuring his wife plays out inside a fancy hair salon. To say Life in Pieces struggles to find the balance and poignancy between its stories is an understatement. Look no further than the episode’s first eight minutes, where naked cooking with Colleen and Matt turns into a Ponzi scheme joke featuring Chad, who is out of prison due to overcrowding (putting Life in Pieces in a comedic hyper-reality it has never embraced or tried to introduce before). This opening story literally has nothing to do with the family at the center of the show, and is written in a way that completely absolves Jordan Peele of bringing the scene to life. Chad is just lame, and it’s weird to see him back two weeks after he was sent to prison; forget how pointless his presence in the Short kitchen is, it’s jarring to see a Colleen/Matt story once again get hijacked by a character who wasn’t supposed to be around anymore, and completely sucks any sort of energy (or even simpler, consistency) out of the room, which leaves it only with a bunch of Ponzi scheme jokes, punchlines that feel as dated as they sound.

At this point, Life in Pieces is entrenched in its formulaic habits, which makes each episode a 75% disappointment. There’s only one story in every episode that’s given some real weight, the other 16 minutes of the half hour seemingly around only to lessen the impact of the one developed story. Those contradictory stylings are what have trapped this show in stasis since its first episode. No character is allowed to grow, yet Life in Pieces still wants to have the rough outline of a cathartic, moving family story, which doesn’t fit in with the cringe humor and abundant jokes about genitalia, and until the series commits to one or the other, it’s go no chance of getting its narrative or its characters off the boring treadmills they’re currently housed on.