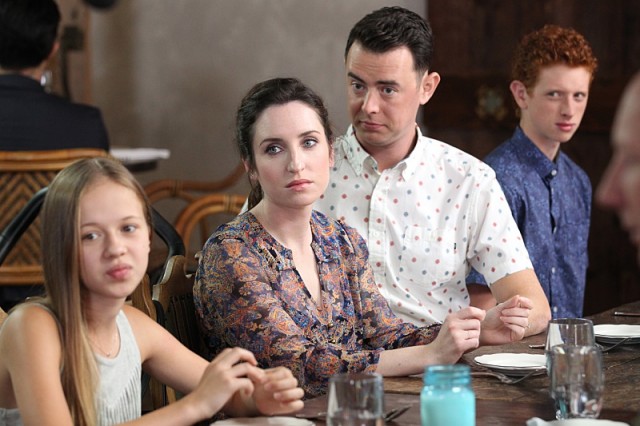 Through its first three episodes, Life in Pieces can’t figure out what it wants to be. “Pilot” was a funny take on conventional family stores, while “Interruptus Date Breast Movin’” turned that predictability up to 11, morphing into a less funny, more grating comedy, relying on jokes about breast milk and a moving company that employs convicts for laughs. “Sleepy Email Brunch Tree,” the episode with the most annoying title yet, is something completely different, the first time Life in Pieces has truly embraced its vignette nature to tell three distinctly different stories.

Unfortunately, this reveals the deepest flaw of Life in Pieces‘ construction: this show is prone to an identity crisis on a weekly basis, simply given how the writers want to approach the thematic material of the episode. Uniting three stories by a single event (I’m fully expecting a “one story, four perspectives” episode at some point this season) opens a lot of potential for resonant third acts, but can quickly pull the show into schmaltz territory, given the general shallowness of jokes in the first three episodes. Telling three isolated stories, as “Sleepy Email Brunch Tree” does, allows for a bit more individual focus, but also comes at the cost of turning 22 minutes into three fragmented 8-minute sequences, hardly enough time to really dig into any story or issue.

“Sleepy Email Brunch Tree” suffers from this weightlessness in every story, its reliance on comedic ironies — Greg gets arrested on his “night out,” the Short men can’t cut down a tree together, Heather only sends her email after being assigned a position — ultimately revealing the empty core of each story. On some level, it’s nice that Life in Pieces isn’t trying to pander to an audience’s base sensibilities. There are no neat resolutions to be found, no cathartic speeches that bring any of these stories some emotional resonance. Rather, they each just end, cutting to black once the ironic peak of each story is massaged to the surface.

What it creates is a half hour where the most memorable things are a licensed song (Bonnie Tyler’s “I Need A Hero”), Tim’s insistence on using swinger jokes as icebreakers, and a repetitive joke about withered hot dogs. To call “Sleepy Email Brunch Time” a light episode is an understatement: this episode floats into the ether on a fluffy, extremely white cloud of nothingness. While I don’t need every episode of television to change the way I look at life, there’s literally no arc to “Sleepy Email” in any of its segments, or as a whole. The closest thing it approaches to a complete story is Jen and Greg’s latest parenting mishap, which through three episodes is by far the most engaging, energetic component of the show.

With each episode of Life in Pieces comes a lower set of expectations. The series’ format and “edgy” sensibilities haven’t amounted to much beyond simplistic ironies and jokes about genitalia — in many ways, it’s as safe and familiar as any comedy on the Big Eye not named Mom. And that’s unfortunate, because tucked away in the corners of “Sleepy Email Brunch Time” are possibilities for entertaining, enlightening stories:. Unfortunately, Life in Pieces is already becoming too comfortable and sterilized to grasp any of that potential and turn it into something special.