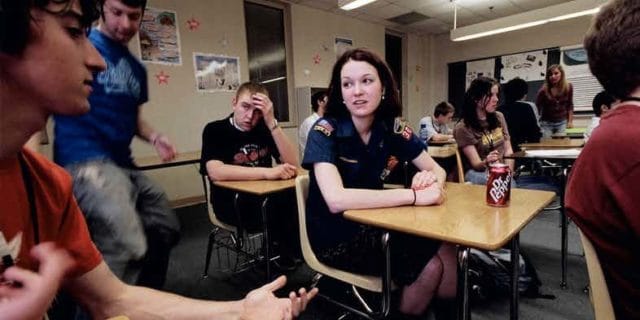 You might think that working as an extra on a movie or TV show would be an exhilarating experience, but the truth is that it’s a little more involved than all that. The extras, the female extras in fact, are often shown little respect and are given very demanding tasks to complete that are far more challenging than those given to men. Being an extra isn’t easy if you’re a man or woman, but it can be particularly challenging on females largely because they are often asked to do things that men aren’t bothered with. Below are fifteen good examples of what it’s like to be a female extra and what they must go through on a constant basis.

Even if someone is doubling for an actress they can’t say as much because they’re contractually obligated to keep quiet. So much for padding the resume and impressing one’s family and friends.

Unless it’s something that could have been avoided and is the direct fault of the film crew then injuries to an extra are not always covered and must be handled by the individual. It’s a rough business but they’re told this going in.

If you’re cast as a singular character there’s a good chance that you’ll continue to be cast as something similar in each role that you’re given. So a biker chick would be a biker chick, or a prostitute, or something along the lines of a woman that’s tougher than most and not as reputable.

Most sets hire tens to hundreds of extras as they need them, and don’t suffer a lot of foolishness or anything else from those they hire. If you screw up even once chances are you might not be asked to come back.

It’s more of a personal thing with many people but for women, who are known to be a lot cattier than men, casting an older woman on the set as an extra can and has been seen to create a very real age gap that doesn’t tend to bring the older and younger members together.

In fact it’s hardly ever glamorous. You have to do what you’re told at all times, wear what you want, accept that you’ll endure criticism and be expected to be grateful. Being a Hollywood extra seems a lot like being back in high school.

9. Without continuity everything falls apart.

You have to wear the same outfit, the same jewelry, and look the same way every single day until a director or someone else in charge tell you different. Even wearing a different necklace each day of the shoot can muck things up.

8. Fainting and pregnancy aren’t disallowed but they aren’t a good way to keep your job.

Let’s be honest, fainting while pregnant is possible and shouldn’t be ground for getting fired. But once again, this is Hollywood, they don’t tend to care unless you can work through it and help them get the shot.

7. Dealing with the other extras.

It has to be observed that other extras, and there will be many, will all be trying to impose their will and tell their fellow extras what to do. The bad part about this is that no matter their experience they still don’t have that authority.

A lot of celebrities will, when angered, act like self-important children and throw tantrums. This is just something an extra has to deal with or walk away from.

5. Getting intimate can be part of the job.

Even extras get intimate scenes. But whether or not they make it into the final cut can be a little frustrating since it means a man is getting a kiss and maybe something else for absolutely nothing.

4. Sometimes sucking up your pride is more of a demand than a requirement.

If you want a job you sometimes need to play along to get along. But few things are as annoying as playing into a ridiculous male fantasy while trying to be a serious actor.

A lot of extras don’t seem to get the point that they will be placed as the director wants them. Jockeying for position at the front is only a sure way to get fired that much quicker.

2. Playing a dead body isn’t as great as it might sound.

A lot of times the dead body isn’t shown fully and at times the face isn’t shown at all. So in truth women get all dressed up and made up only to show a portion of their body for a few seconds.

1. Women are not all that safe from male attentions on set.

Anyone that does or think they have a little power on the set seems to think at times that they can have their pick of the female extras. This is unfortunately a reality that’s been reported more than once in the past.

Anyone still want to be a female extra?

H/T to Screenrant for their original piece.