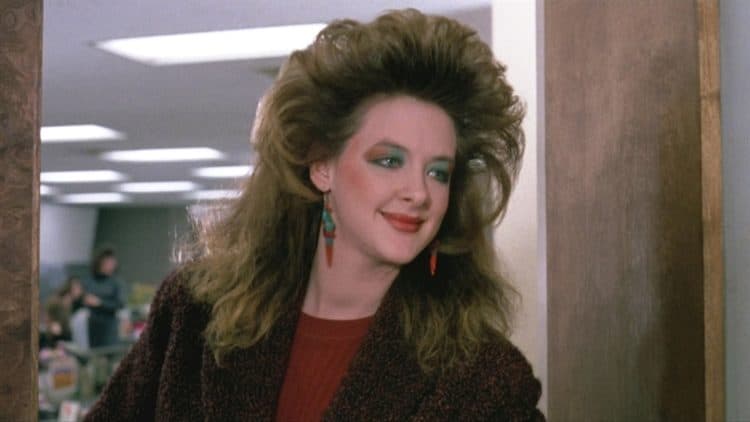 Some actors tend to do best if they’re not in the spotlight every second as the idea of supporting the leads and other actors tends to come naturally to them and as a result can be enough to launch and stabilize a career in which they’ll be constantly remembered. This doesn’t mean that stars like Joan Cusack will always be relegated to the shadows where they await notice, not at all, but it does mean that stardom comes from the level of support that they can offer the leading men and women in any role, and few do it better than Joan. Throughout her long and successful career she’s been one of those actresses that you love to see simply because she’s one of the perfect supporting characters as her mannerisms and mood can change to fit one character after another, insuring that the movie she’s in, whether it’s good or bad, will at least be memorable. While she does tend to back up her brother John quite often she’s also worked with some of the best in the industry and has done more to support and bolster them than many seem to realize.

Here are five of her best movies to date.

Jessie has a rather sad tale since she was one of the many toys that seemed to have been forgotten by her child, a common occurrence it would seem in the life of a toy as a lot of us can admit. But when Woody, the star of the show that she once belonged to, finally showed up and seemed to make everything right, she was ecstatic since her life finally had meaning. But throughout the movie it’s discovered that the Prospector, another toy in the same show as Woody and Jessie, was feeding her lies the entire time, and by the end she finds a place with Andy along with Woody, and even finds that she has more to offer than she realized. This is even more true if you believe the theory brought forth by John Negroni and many others throughout the years.

The character of Alsatia is more of a companion than anything, a robot built by Leslie’s father to keep him company after the passing of his mother. When the toy factory that has been in the family for so long is threatened by the idea of making war toys however Leslie quickly finds a way to fight back and to mature in the manner that his father wished before his passing. As a movie this tanked horribly, but the idea was sound enough and Robin Williams, being the childlike individual that he could be at times, was actually quite good in this. The whole thing was a bit dark in spots however, which might have ruined a lot of the overall good feeling.

It’s a bit difficult to really shine in a movie with some actors since some folks tend to carry around the kind of energy that’s difficult to step past in order to be noticed. Jack Black, who is in fact a rather funny and talented actor, is still someone that at times has managed to upstage and drown out just about everyone on screen. Whether he did this on purpose of not is kind of irrelevant since it did happen and it was easily noticed. Thankfully Joan is the type of actress that can push through and accomplish her role in a manner that snaps things back into focus when it’s needed so as not to be drowned out completely.

Ah, the era of big hair, lots of makeup, and the role of women in the workplace that seemed so patronizing at times. This movie showed a great deal of how women had to struggle in the workplace but could also land their dream job in ways that might seem highly negative to some, but somehow justified as well. When Tess comes up with a great idea that her boss all but states is not going to work it’s easy to see how she would be devastated, but when she finds out that her boss was planning to pass the idea off as her own she decides to get a little payback and begins to make plans of her own while her boss is out of town. It’s a movie in which karmic justice actually works for once, though in real life Tess might be in just as much trouble as Katharine.

Hannah is a woman who is out to see justice done and doesn’t let up just because someone is a government informant. To be fair, Vinnie doesn’t really make the job of being a government agent in the Witness Protection Agency easy since old habits die hard. But throughout the movie he does manage to finally do some good as he brings people closer together and finds his own little piece of heaven.

She’s a lot more important to cinema than some people might admit.