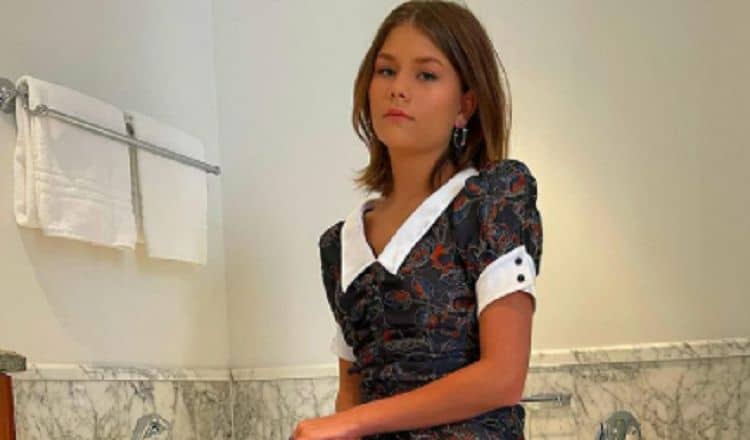 When Lia McHugh was born, she didn’t know that she’d end up being a famous actress in some of the coolest projects around. She’s still so young, and she’s still in awe of all she’s managed to accomplish as a teenager, and we are all cheering her on. She’s talented, she’s lovely, and she is taking the world by storm. The young “Into the Dark,” actress is now part of the major Marvel franchise after taking on the role of Sprite in the Marvel movie, “Eternals,” and she is killing it. She’s a household name at this point, and her fans want to know everything about her.

While we do not know the date she was born, we do know that Lia McHugh was born in the mid to late-2000s. She’s approximately 14 as of 2021, and she’s just a baby in the eyes of all adults who have kids of their own. While she’s not yet a legal adult, she’s a hard worker and a total success. That’s something to be proud of.

2. She is a Pittsburgh Girl

McHugh was born and raised in Pittsburgh, and she lived there with her large family. She lives with her mom and dad as well as three brothers and sisters who are older than she is as well as one younger brother. She’s the fourth in line out of five kids.

3. She’s From An Acting Family

What some people fail to realize about this young actress is that she is from a family of actors. Her siblings are Flynn McHugh, Logan McHugh, Shea McHugh, and her younger brother is Gavin McHugh of “9-1-1” fame. He plays Christopher Diaz in the show.

4. Her Younger Brother Has Cerebral Palsy

You know him from his television character, but did you know that he has CP and it’s not just his character playing a part? He was born with it, and it affects his movements. It’s defined as a movement disorder, and it affects everyone on a slightly different manner. Some people who live with CP have issues with their speech, some have sensation, vision, speaking, swallowing, and/or hearing problems. His family adopted him from Latvia when he was just a child of two.

5. Her Family Moved to LA for Acting

While she was born in Pittsburgh and did spend some of her childhood being raised there, Lia McHugh is a California girl now. Her family moved to California when her brother was a toddler so that they could try their hand at getting the older kids into the acting industry. It is a very big family thing, and they do it as a family.

One thing that might stand out to everyone who has any interest in the Marvel cinematic universe is that they don’t often have young superstars and heroes. Here she is, though, working as one of the youngest superheroes in the franchise, and it is a huge deal to her. She’s so excited about her role, and her fans are even more excited than she is.

7. She Gets Hilarious Questions

When she was first cast and people found out she’d be part of this movie, they kept asking her if she would have a speaking role. It was hilarious to everyone around her because no one ever thought a child of only 14 would become one of the main characters in a movie this big.

When she went into this movie for the very first time, she was terrified. She was nervous for so many reasons, but least of all because this is an ensemble cast of some of the most famous people in Hollywood and she’s a kid. She is young, so she just knew some of the people as that “lady from Maleficent,” rather than as Angelina Jolie, one of the most famous women in the world. She didn’t understand, so that helped her. But, she overcame her nerves.

9. She Understands her Character

She’s still a child, but she’s always looked younger than her age and been treated as a child far younger than she really is. When she read the script and got a feel for the character, Sprite, that she plays, she knew that it would work. Sprite is someone far older than she looks, and it was easy for McHugh to put herself into that role.

Now that she’s a Marvel superhero, it’s all but guaranteed that we will see her again and again and again in movies, and she kind of hopes she’d get to go round with Spiderman. She calls them vastly different, but that it would amazing to work with that character as a superhero.