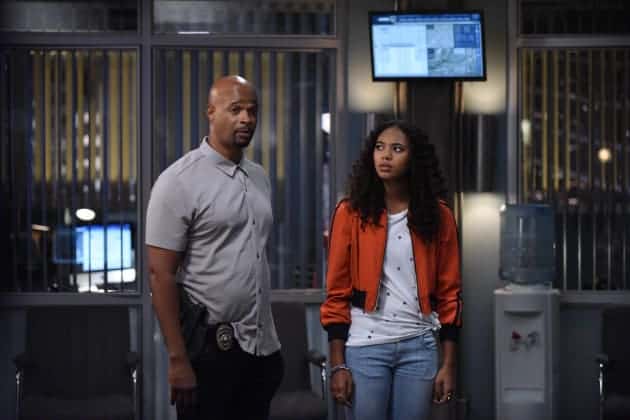 On this Week’s Episode of Lethal Weapon Riggs and Murtaugh investigate the death of a man thrown from a plane. Riggs sells his stuff at a pawnshop and Murtaugh tries to reconnect with Rianne.

The episode starts with a plane filled with rich people being robbed. After stealing their belongings the robber puts on a parachute and prepares to jump out of the plane. Things don’t go as planned when one of the passengers he stole from fights to get his briefcase back, sending them both flying out of the plane, killing the passenger.

Meanwhile, Riggs goes to a pawnshop to sell some of his things including the rifle his father gave to him and taught him to shoot with because he is simplifying. Then over breakfast, Murtaugh tries to reconnect with Rianne and it doesn’t go as well as he hoped.

At the crime scene, Riggs and Murtaugh talk to the flight attendant and she says that she has never seen the robber before. Back at the station, Riggs talks to Dr. Cahill and she asks him why is he getting rid of all of his stuff. He says that he is just getting rid of the things that he doesn’t need. She finds it interesting that he got rid of the rifle his father gave him because he never talks about his childhood.

Deputy Chief Santos comes to see Captain Avery and asks him how the Leadership Conference was but she is surprised when Captain Avery thanks her for nominating him and tells him that the Leadership Conference is one step before a suspension. She tells him that a Captain needs to have the respect of their detectives. Riggs and Murtaugh come and joke around with him causing him to tell them to sit down and shut up because Deputy Chief Santos was standing there. Once she leaves he starts acting normal again and asks them how is the case going.

Murtaugh tells Captain Avery that the man who robbed the plane is Dan Cooper. (Played by Adrian Pasdar) and that Bailey found them a lead at a motel in Burbank. When they arrive at the motel Murtaugh leaves a message for Rianne asking about dinner that night. Riggs comes out of the motel and tells Murtaugh that Dan is staying in Room 201. Riggs realizes that he was gone when he saw there was no ice bucket in the room.

Murtaugh hears Dan’s phone ringing and he finds out that the flight attendant is his daughter. At the station Riggs and Murtaugh question Dan’s daughter and she says that she didn’t tell them that she was his daughter because they would think that she had something to do with the robbery. She said that she hasn’t seen her father in eight years, and she agrees to help them find her father.

She takes them to the Arcade where her dad used to fence his stolen goods when she was a kid. When Riggs and Murtaugh talk to the man at the Arcade (Dugan) he admits that he saw Cooper that morning. He tells Nora that her father is dying and she doesn’t believe it because she has heard it before.

They leave the Arcade and she takes them to the restaurant where he usually goes to sell the things he steals. When Cooper shows up at the restaurant a shootout occurs. Cooper says that he didn’t murder anyone, that Eli Woodcock’s death was self-defense and that he didn’t shoot him because he doesn’t carry a loaded weapon. Bowman comes to tell Murtaugh and Riggs that Cooper did not shoot Eli Woodcock because the bullets don’t match.

Rianne shows up at the station in handcuffs. She was arrested after a protest at the Zoo. Murtaugh tries to convince Rianne to give him the names of the people who started the protest. When she refuses he starts asking her questions about her life and why her friends don’t come to the house.

Riggs goes to talk to Nora to try to convince her to talk to her father. She refuses at first and eventually she agrees. After admitting that he stole a briefcase from Eli Woodcock, Cooper has a heart attack. When they get to the hospital the Dr. tells Murtaugh and Nora Cooper has six months to live.

Captain Avery and Deputy Chief Santos tell Riggs that the rifle he pawned was used in a robbery. Riggs tells them that the briefcase that Cooper stole had two million dollars worth of diamonds in it. Riggs and Murtaugh go to see Cooper in the hospital when they find out that he lied about the briefcase being in the pond but when they get there he is gone.

At the park, Murtaugh and Riggs are surprised to see Captain Avery and Deputy Chief Santos. Riggs is also surprised that Cooper showed up. Cooper refuses to give up the briefcase until he knows where Nora is. Riggs tells everyone over Comms to back Coopers play. When Riggs can’t see Nora and Captain Avery’s Comm goes down he tells Murtaugh to take the guys by the van on his own. Riggs takes the only shot he has to cause the briefcase to fall which is through Deputy Santos’s jacket.

At the hospital, Cooper gives Nora a diamond he stole from the briefcase but she ends up giving it to Riggs. Deputy Chief Santos offers Captain Avery a Post of his choosing but Captain Avery says no.

Rianne decides to stay in with her friends instead of going out and she keeps the panda Murtaugh got her earlier in the episode.

At the end of the episode, Riggs gets the gun back that he pawned and he goes to see Dr. Cahill. He tells her that is the rifle his dad taught him to shoot with and that is the rifle that shot his dad. Overall I think this was a very strong Episode.