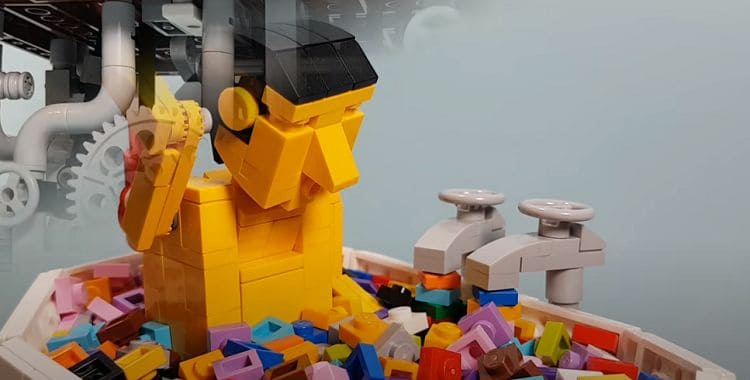 What’s really funny about this clip is that the inner workings of this Lego man taking a bath set probably isn’t all that hard to put together, but for those that don’t see everything the way the builder would it might feel like a person needs an engineering degree just to make it work. If a person isn’t the type that looks at a bunch of gears and belts and thinks of how things connect with each other, and there are plenty of us out there, then this is bound to appear as a modern marvel that might be for amusement but is still considered to be highly impressive since figuring it out might be a little difficult. In all seriousness, it probably wouldn’t be too hard to put together with a detailed set of instructions, but it would likely be time-consuming, and there wouldn’t be any room for mistakes since otherwise, something might not work as it should. The effect is pretty cool since as simple as it probably is there’s still enough going on within the base of this Lego set that makes it appear as though taking it apart and putting it back together would require a good amount of time and several photographs and a list of directions in order to get it right. Some people like playing with Legos and some folks like taking it to the next level with automation, which is impressive but hard to replicate.

To think that some folks look at a pile of Legos and start to put them together with something in mind is kind of hard to fathom since a lot of us might look at a pile of Legos and think of a dozen different designs, but won’t have a clue as to how to start them. This is the kind of project that a very compartmentalized mind can come up with and execute since it definitely needs a rational and very goal-oriented individual to make it work. It’s true that a lot of people could possibly do this, since taking the time to finish and to make sure that everything works as it should isn’t too hard, but still, thinking that it would be a simple matter of fitting the right blocks to each other in a quick and efficient manner is something that some people would find hard to believe.

Other automata are even more complex since the video below by Paul Spooner is something that a lot of people would be impressed by but probably wouldn’t think is that possible unless one has the skill to both create and animate their work as well. The kind of knowledge that’s required for such a thing isn’t a huge secret or confined to only those that are super-intelligent, but it is something that has to be taken somewhat seriously since otherwise it’s bound to happen that mistakes will negate the effect that a person is going for, and therefore make the attempt kind of useless.

My take on one of the finest automata ever built: The spaghetti eater by Paul Spooner (See below.) I envisioned a man enjoying a bath full of Lego, because, let’s be honest, we’ve all thought about it, right? The shape of the bath was the hard part, but making the model “water tight” so all those 1×1 plates wouldn’t jam the mechanism was a nice challenge as well. I figured a Lego bath would require some special plumbing, so I got a bit creative with the lower part, which gives it a bit of a steampunk look that I’m quite pleased with. Keep clean & healthy, people!

Just watching those that enjoy creating such things put them together and then animate them is amazing since creating the mechanical process is intriguing and the fact that everything works the way it should is something that might make a lot of people jealous since it is a valuable skill given that the understanding of machines and how they work can lead to a very marketable set of skills that can be used in many different ways. This kind of application could be a joy for a lot of people since it can be used to make folks happy and entertain them in a very special manner. But it can also lead to other projects that might be a lot more complex but will challenge the builder even further and enhance their skills along the way, creating a vast knowledge of how to apply their skills for the betterment and the continued amusement of others. These types of skills are great to have since they can take a person in a lot of different directions if they apply themselves and have a set idea of what they would like to do with them. Legos are only the beginning since this type of skill can take a person quite far in life.