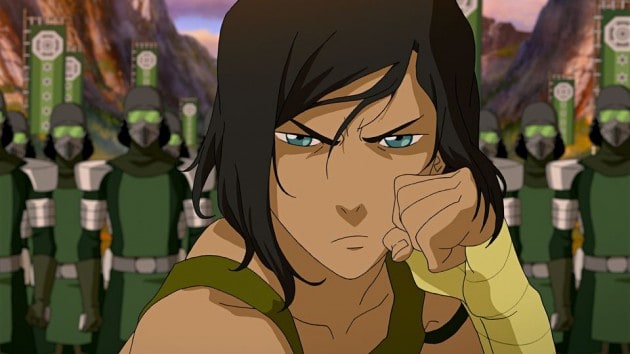 Despite a mildly misleading title, “Battle of Zaofu” winds up being another exciting episode of The Legend of Korra as the series sets up its final major conflict. The itch to see that conflict in full is starting to become unbearable, but there’s one storyline in this episode that quells it as best as it can. Since his introduction to the series back at the beginning of season two, Varrick has been–at the very least–entertaining. Yet, even with potentially one-dimensional characters, Korra finds a way of humanizing and deepening its cast in surprising ways. Bumi, for example (still absent, because we can’t have nice things), is someone who could have just served a superficial function. But his struggles to find his strength and position next to his brother and sister as one of Aang’s children was an absolute joy to witness. Varrick has had the occasional fist-pumping moment, but “Battle of Zaofu” goes a step further in using him to show the difference between what someone who is inherently good would do in a situation versus someone like Bataar Jr.

Bataar recognizes the advantages of harnessing the power of the spirit vines, yet only for nefarious methods that he pretties up by saying it’s pursuing science to its end (for another Oppenheimer scenario, see this week’s episode of Arrow; television tends to be coincidental like that). Varrick sees the potential for sustainable energy and, even as someone accustomed to the wealthy style of living, he refuses to surrender his invention to someone with the wrong motivation. And by not surrendering, I mean he’s willing to sacrifice his own life. Some of the most emotionally powerful moments in any kind of story occur when a character does something heroic without giving pause for thought; it’s just a part of who that person is. Bolin might freak out, and there’s plenty of wonderful comedy in the train sequence, but in the end, it’s Varrick’s total willingness to go down with the proverbial ship. You almost expect him to have a laugh when Bolin hits the switch to disconnect the train cars, but as soon as Bolin starts joking around and expecting Varrick to tell him his master plan, it’s clear what kind of person Varrick is. As an Avatar, Aang brought out the best in the people around him–even when they were trying to capture or kill him. Korra, too, seems to have a gravitational pull that works directly and indirectly. Team Avatar has come a long way (especially Asami in last week’s episode), but it’s also clear that the people who are simply tangentially tied to Korra–people she’s only  met a few times–feed off the good in her. It explains why, in her absence, the Kuvira thing has gotten out of hand, but it also shows how someone like Varrick (a character who has witnessed first-hand the Avatar in her purest, most mythological form) can embrace being the best version of himself. This is a long-winded way of saying “Good job, Varrick.”

Looking at the other major aspect of this episode, the “battle” of Zaofu isn’t so much a battle as it is a preview. On the one hand, it’s great to see Korra and Kuvira duke it out. The animation during the fight is top-notch, and it’s a fight we’ve been waiting to see since the beginning of the season. But I’m not sure how necessary it is at this point. The step-by-step of it is predictable down to the moment we see Korra looking at herself again, which isn’t used nearly as well here as it was in earlier episodes. I also feel like we’ve not seen enough to justify how easily Kuvira handles Korra. Even when she’s not in the Avatar state, Korra is an excellent fighter who has mastered the elements both in terms of utilizing them while attacking and learning from their philosophies. Considering the people she’s had to fight before…well, Kuvira just doesn’t feel like she’s on the same level as any of Zaheer’s group. Maybe she is, and that’s fine. That’s more than fine, actually; Korra’s final nemesis should be her toughest. But it has kind of come out of nowhere, making the whole battle less interesting.

It’s hard to fault “Battle of Zaofu” for that, though, and I’m sure many fans will have loved every bit of the battle. We’re still in table-setting mode, which should start to escalate next week given Korra‘s track record. So, if this episode is here to show how awesome Varrick is while more of the pieces get moved around on the board, mission complete. Now, if we could just get some Mako…and Tenzin…and Zuko (or any representation from the Fire Nation)…and…

– Speaking of Zuko, Su’s covert ninja op. was reminiscent of the Blue Spirit.

– We’re playing the long game with Zhu Li here, which is excellent. If she doesn’t wind up being a double-agent, I’ll eat my shoe.

– That said, this is pure gold: “People will say ‘Hey, what happened to that guy?’ ‘Oh. Didn’t you hear? He Varrick’d himself because some girl Zhu Li’d him!'”

– But you can really see how deeply this is affecting Varrick: “Cookie jar empty…no hot towels…waxy build-up…Zhu Li!”

– Sorry for the Varrick overload, but he’s full of them in this episode: “You couldn’t discover a wolfbat if it was building a nest in your butt.” Dang. Sick burn.

– And so is Huan: “Stunning work, Ikki. It hurts my eyes with its raw emotional power. Ah, pedestrian. I already know what you look like on the outside. I want you to show me the inner Meelo.”

– Apologies for missing last week’s review due to personal reasons. In short, it was excellent. We’re halfway through the season. How exciting…and depressing.