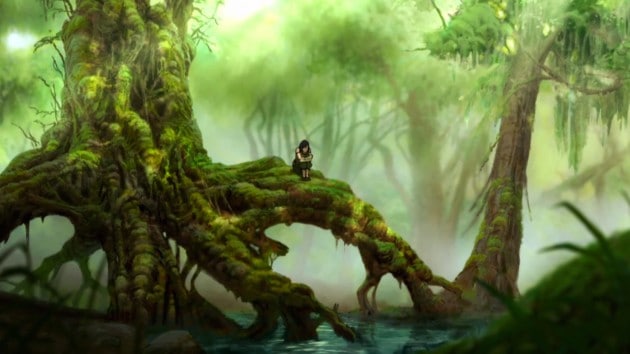 When watching The Legend of Korra–or any TV series, for that matter–it’s hard to view the product from outside the context of the story itself. Maybe in special cases like this one, the animation or scoring is just so superb that you wind up buying official art books or OSTs. More often than not, though, the show is so engrossing that it exists in its own world. The showrunners and voice actors are somewhere out there floating on the periphery not-so-secretly pulling the strings, but acknowledging them is a secondary task to appreciating and analyzing the show they’ve created. In the case of the Avatar franchise, there is someone who simply cannot go under-recognized and -appreciated, because to do so would be a travesty. Katie Mattila’s major contributions to Avatar: The Last Airbender and The Legend of Korra have been sparse but phenomenal in the purest sense of that word’s otherworldly connotations. And if you go back and look at her list of writing credits, that’s very apparent. “The Tales of Ba Sing Se” and “The Beach” are both among the select few best episodes of Avatar (Mattila wrote the latter and contributed “The Tale of Zuko” to the former). And remember last season’s “Old Wounds”? You know, the one that went head-first into Lin’s background with her sister and deepened her character in a way that made her the most compelling part of an already excellent season? Also a Mattila-penned story. “The Calling” isn’t quite on that level and has an occasional hiccup, but this episode is still clearly the work of someone who is perhaps Korra‘s (and Avatar‘s) best individual writer.

On the surface, “The Calling” might feel unremarkable to some. For an episode this late in the game to devote half of itself to a romp with Tenzin’s kids without really advancing much could be disappointing. Even the more weighty material with Korra goes through some of the same motions as last week’s legitimately underwhelming “The Coronation”. In response to this, I would again point out that each season of The Legend of Korra does this for at least the first few episodes. It’s usually the end of the sixth episode that makes you feel like the season is truly starting to move. And for a piece-moving episode, “The Calling” does several surprising things in the process. For one, it’s hilarious. This might not even be on Mattila’s writing, either. I feel like this whole crew of writers share a similar sense of humor that somehow meshes natural comedy with zingers in a way that doesn’t feel like writing at all. It’s almost like that one friend you have who is funny in spite of herself. It doesn’t matter what she does; everything that comes out of her mouth generates laughter. Avatar and Korra find ways of following that kind of person around and distributing her gift to their characters. The obvious example in this case is Meelo. He is a walking stand-up routine in “The Calling,” and to try and highlight that would be foolish–you’d be quoting the entire episode. How this level of comedy doesn’t detract from the seriousness of what’s going on is the key part, though, and it’s totally beyond me. Even in cases where the tone drops heavily and someone says something funny (like Toph telling Korra not to freak out this time), it doesn’t subvert what the scene is trying to do. The comedy in this franchise is one of it’s strongest assets, and because it’s highly unlikely we’ll get the chance to have another episode this funny for the remainder of the series, it’s all the more important to witness and appreciate this episode on that level right now.

The true secret weapon of “The Calling,” however, is Ikki. How many Ikki moments do you remember before this? Because I’m blanking. And yet just in a short piece of dialog, Mattila gives Tenzin’s middle child more character than she’s received in every preceding episode combined: “My name’s Meelo. I like to throw away food and fart at inappropriate moments. I’m Jinora. I’m so above it all, because I’m meditating all the time.” That’s it. That tells me everything I ever needed to know about who Ikki is. The rest of the episode gives her space to blossom. She, too, is shockingly funny. She’s also the one who nudges the crew in the right direction. Her interactions with the soldiers are some of the episode’s best moments, including when we see that she could have escaped whenever she wanted to. Ikki is smarter than everyone gives her credit for, including myself, and it’s a humbling experience watching half of the episode pivot around her. The three kids may agree in the final act that it was a group effort finding Korra, and maybe it really was. But Ikki is the one who shines brightest while her brother is off poisoning himself and her sister is too busy trying to be their father.

Then we get to Korra and Toph, which shows why this should have either been included in last week’s episode or last week’s episode shouldn’t have featured Korra and Toph at all, since it amounted to nothing. Here, Toph actually imparts useful information in her unique way. Amon, Unalaq and Zaheer all haunt Korra because she hasn’t finished fighting those battles in her mind. What’s worse for her is that those three actually represent admirable qualities in people more balanced and less idealistic as proponents of equality, spirituality and freedom. This, unfortunately, might be an instance of the writing holding our hands in the same way that Toph accuses the Avatar of needing hand-holding. We know these things about Korra’s villains; it’s what made them compelling figures. So, is it necessary that Korra hears this? I’m not sure, but you could definitely accuse some of Toph’s speech as relying too much on exposition. That’s all much less cumbersome when she follows it later by saying to Korra “That fight is over. Release the fear.” There is Korra trying to bend the rest of the poison out of herself. She gives it a go and gets another Zaheer vision. She’s suffocating. And then “That fight is over.” It’s an extremely simple sentence and observation. But this is writing utilizing minimalist qualities to full effect. By saying “That fight is over,” Toph is telling Korra that she can see exactly what the Avatar is going through. It’s also telling Korra something obvious that she just isn’t understanding and works as a sort of epiphany. “That fight is over.” Credit the voice acting, too, but that was one of two moments that started the waterworks for me (the other being the three kids running up and hugging Korra). “That fight is over” is the turning point that Korra has needed since the end of season three, and when it finally hits, it’s breathtaking. Sure enough, Korra removes the poison, goes into the Avatar state and we are well on our way to the next stage of this final season. Again, this isn’t a perfect episode for Korra, and I’ve only glanced at a couple other reviews that have been less than generous with praise. But Katie Mattila’s writing pulls this one through a relatively uneventful moment in the season and leads up to a climax that stands among those all-time great Korra moments.

– Seriously. Too many Meelo moments to even begin listing them here. Turns out he’s a great artist, though. And Poki is just as dumb/stubborn as he is for eating those berries. Although, Poki might be a little worse, since he eats his own regurgitation. Ugh.

– Also seriously: Jinora is Tenzin. “Ikki, I can’t concentrate if you keep talking. Why don’t you go play with one of those spirits?” That is J.K. Simmons speaking through Kiernan Shipka.

– “The Avatar? We still have one of those?” And that would be me at the bar, totally disillusioned.

– Pet peeve: repetition. “I feel so much lighter. Thank you so much for helping me.”

– Anti-pet peeve: Toph telling stories about stuff that happened in Avatar. “I threw some rocks at the Avatar, he got all whiny and Sokka fell in a hole.” Yep, that about sums it up. “It was hot. I was on a blimp. And I think a giant turtle showed up. Wow. What a day.” I’ve always wondered what everyone else was doing during that final showdown, because I don’t think everything was happening simultaneously. I’d be pulling out the popcorn.

– Is the deforestation meant to get us to dislike Kuvira more? Because we already dislike her.

– Finally, the shot of the episode goes to the “camera”-work during Korra’s big moment. After she tries a second time, the camera is positioned with her right arm in the center as it does a circular motion, then it centers on Korra’s whole body. Most impressively, it takes a few steps backwards. It doesn’t just move backwards on a rail. It mimics the movement of a cameraman taking steps, and the frame goes up and down slightly just before being pushed back when Korra throws both arms forward. This stuff is ridiculous.