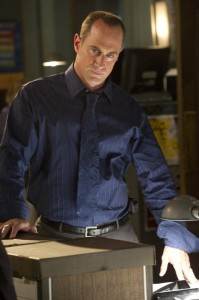 After being incredibly impressed with last week’s episode of SVU, with Jennifer Love Hewitt as guest star, I knew it was going to be difficult for this week’s episode to top that, or even match it.

Unfortunately, it wasn’t on the same caliber. But it was still a solid episode of SVU.

A young girl was hit by a cab, but Benson and Stabler soon discover that she had also been abused and stared before dying. Tracking down her father, they learn that the sent his daughter and son off to a farm to work because the family had lost everything after their mother had died. The father begged Benson and Stabler to help find his still missing son, Micah. Benson and Stabler try to track down the woman who offered Micah and his sister jobs at a farm in the first place while Fin hits the streets, trying to track Micah down. He’s led to a group prostitution ring. When they finally find Micah, he’s a prostitute with scars up and down his back and is begging to be let go, otherwise ‘they’ll get punished’. His lawyer won’t let the detectives question Micah while he’s still a suspect in his sister’s murder, so they call in Dr. George Huang.

I’ve always like B.D. Wong’s character (Huang). He’s unflappably calm and his interaction with Micah was a terrific long scene. Micah describes the abuse he suffered at the farm. While it’s not as superb as the scene with Jennifer Love Hewitt while she described her rate, it’s still an excellent scene. When Huang suggests they give Micah immunity and turn the case over to the feds, Benson and Stabler go to federal prosecutor Christine Danielson (Gloria Reuben) and get appointed deputy marshalls in order to help her track down all of the suspects.

Benson, Stabler and Christine head out into the field to find the farm and retrieve the kids. The cops engage in a game of chicken with the suspects and then find the farm and the rest of the kids who had been poisoned with cyanide.

The kid who played Micah is terrific (I can’t find his name on IMDB). He’s spastic and emotional. Sex trafficking and abused kids is not a new story on SVU, but it always gets to me. However, my only real complaint is that the ending of this case felt anti-climactic. I felt no real urgency for the kids to be saved (even though, of course, I wanted them to), because the show just sort of ended. I really think I miss the courtroom scenes because they bring more closure and sometimes excitement to the show. At the end of this episode we were told the suspects would spend life in prison and…well, that was it. No big, exciting trial. We didn’t even meet the traffickers properly. It seemed to give less meaning to the situation overall.

On a side note, there’s a sub-story about the pipes bursting in the SVU police station that doesn’t make much sense, unless it results in a new squad room, which would be cool. Grade: B