Home
Entertainment
What has Kristanna Loken Been Up to Since “Terminator 3?” 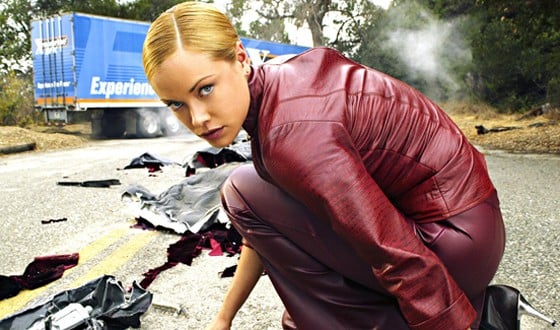 At one point and time Kristanna Loken was going to be a big star. Her place in Hollywood seemed assured when she hit the big screen in Terminator 3: Rise of the Machines. She had the looks, she had the attitude, and, well, that’s kind of where it ended. Someone thought she could act otherwise she wouldn’t be where she is, but considering that there are plenty of actors out there that couldn’t seem to remember a line if it was fed to them off screen she’s not the worst. It could be that in the beginning of her career she was a little stiff, but then again when she got to the roles that were supposed to make her that same failing happened to show up again and kind of plagued her every step of the way along her career. Again, she’s not absolutely horrible, but at times it feels as though she’s attempting to remember her lines and not acting up to her potential, sort of not seeing the forest for the trees if you will. It seems as though she can act without speaking, but once she has to deliver her lines she simply shuts down another part of her emotional bandwidth and sets it to autopilot.

Terminator 3: Rise of the Machines

This movie was reviled by the fans as one of the worst in the bunch despite the fact that Kristanna Loken didn’t do too badly as a terminator. She didn’t have a lot of speaking lines and in many ways she echoed Arnold’s part from the original film. Her task was to go around killing off anyone that would be a major part of the Resistance in the future since John Connor went off the grid and couldn’t be found. This was one of those films that was almost universally hated by fans and casual fans alike simply because it was trying to build on a timeline that a lot of people thought had been altered already. The entire Terminator franchise has basically ripped itself to pieces by altering its own timeline again and again, making it necessary to keep making movies so that they can be justified in one way or another and explained to the fans that have been demanding a more in-depth look at one of their favorite films. Plus, there has been an explanation as to how Skynet chose the form of the terminators, but it’s never been so laid out well enough to really satisfy everyone. You’ve got to wonder just how a machine would go about selecting who they’re going to send after the humans and why they select certain individuals.

After Terminator her career didn’t exactly take off as people had expected.

Kristanna has been busy, don’t doubt that part of her career, but most of what she’s done has been direct-to-DVD and has rarely if ever hit the theaters. In Bloodrayne, one of her only other notable features, she plays a half-breed vampire known as a dhampir named Rayne. She is the daughter of the most powerful vampire in the land and an outcast as the vampire in question raped her mother, thereby conceiving her, before killing the woman years later. Rayne seeks out the vampire and as she does encounters those who want to kill her and those that want to help her as she acquires two sacred artifacts that help to neutralize the vampire weaknesses that she is vulnerable to. All in all the movie was pretty much a bust as anyone’s that played the game would be able to tell you. Loken’s acting is a bit stiff and while there are moments of greatness in the film there’s still a lot to get over that just isn’t that great. This was one of the movies that was supposed to make her career and it kind of just tanked since the acting wasn’t up to snuff and the budget was low enough that the effects were just horrible. It’s surprising too since it starred Ben Kingsley, Michael Madsen, and Michelle Rodriguez as well.

Kristanna didn’t just go away after this as she kept on making direct-to-DVD movies and has appeared on TV shows ever since. She’s had marginally more success in toning her career down just enough to the level where she can be taken seriously and not have to perform to a crowd that expects too much. It’s indicative of how Hollywood works that she would be pushed on audiences due largely to her looks and the fact that she was someone new and exciting that had come on the scene. But unfortunately a pretty face and no substance isn’t always what the crowd will respond to, and it showed in her initial appearances.

She’s still around, but these days she does more on TV than in film.