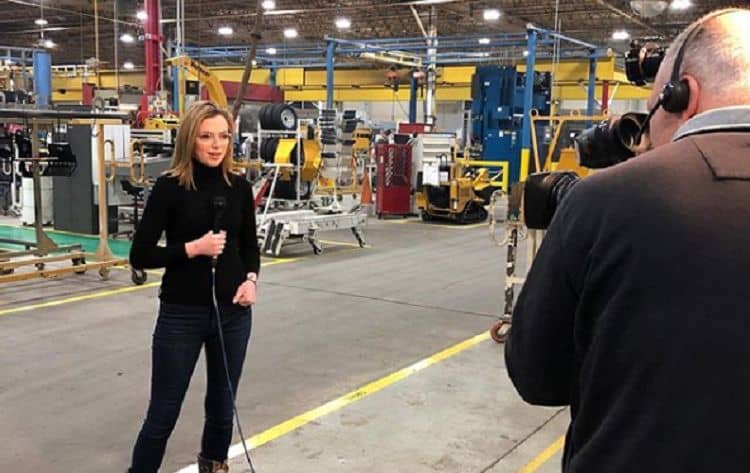 Kayla Tausche knew from an early age that she wanted to be a journalist; therefore, in University, she chose to study business journalism and international politics. Her education paved the way to her becoming a renowned journalist who covered major stories such as Alibaba’s IPO, the phone-hacking scandal at News Corporation as well as covering the White House breaking news. She has risen the ranks and is now at CNBC, where she has been working since 2011. Here is what makes her such a terrific journalist, as well as a few facts about her personal life.

The most important lesson that Kayla has learned while on the job is that she has to be pro-active. At first, she used to feel like she was a nuisance when cold-calling people whose story she was interested in until she realized they were also as eager to tell it. Kayla has become a go-getter in CNBC as she recalls asking to be given an assignment for which she already knew her colleagues were being considered.

2. Her worst days on the job

Like Kayla says, live television can have you make a fool of yourself in front of millions of audiences like she did when she got tongue-tied trying to say “prevalence.” As f that was not enough embarrassment, she also had her mic snagged off by a congregational staffer who hit her. Worst of all was when she was doing a segment; out of nowhere came a homeless who accosted her.

3. The hardest story she has ever covered

Being a journalist demands you to do whatever it takes to get to the story, regardless of where it is. That thirst for news has seen many news reporters go to places that pose a threat to their lives. Still, Kayla believes the toughest story she ever had to cover was in the White House. She discloses that facts change quickly in the White House, and what you have reported as true today might as well be rubbished off as a lie tomorrow. Besides, the different schools of thought in the West Wing mean that people are pushing their own agendas; hence sources may be compromised.

4. People she looks up to for advice

No one knows everything, and sometimes we all need to ask someone for the way forward when we hit a crossroads. Top of the list of advisors for Kayla is her parents, who also double up as her confidants. She has also remained closed with one of her college professors, Chris Roush, who has been her friend through the years; hence he offers advice when she needs it. Finally, Nikhil Deogun, who was CNBC’s editor-in-chief before Brunswick hired him as CEO of Americas, has been an inspiration.

5. The best career advice she received

In school, students are always told to have “SMART” goals, with “M” and “T” standing for measurable and time, respectively. Kayla got the same piece of advice, and it changed her life for the better. She believes that you must have measurable goals and set a time limit for when you want to achieve them. As she told Forbes, in the television industry news moves fast. Therefore unless you have targets, the only deadlines you will be meeting are for your boss.

6. What she would change if she would go back in time

They say that time is a resource that, once wasted, can never be recovered. Therefore people live in regrets wishing they had taken a chance to do something when they had the time to do it. Kayla also has regrets going back to her earlier days when she started her career. She thought she had to be perfect on live television, and every time she messed up, she would dwell on it, and of course, that kept her from moving forward. Her turning point came when she watched other news anchors who had been in the industry for years, also making mistakes; thus, she relaxed.

It seems that Kayla’s family has a thing for alliteration; her mother is Karen, while her father is Kurt. She got married in 2015 to Jeffrey Jacob Izant at the Christ the King Cathedral in Atlanta. However, since Kayla had already established herself as Kayla Tausche professionally, she continued using her father’s name as her surname instead of her husband’s. Jeffrey is a Princeton graduate and also went to Columbia University for his law degree.

8. Her most impactful mentor

As much as Kayla admits to having three people who are her most trusted advisors, there is one person who had the most impact on her, professionally and personally. She told Born on Fifth, Maggie Wilderotter, a business executive and entrepreneur who Kayla met during a conference, has been a significant influence in her life. At the time, Maggie was the CEO of a telecoms firm, and she advised Kayla on different aspects of her life, such as career prioritization for both Kayla and her husband, wealth creation, risk-taking, among many more topics.

Kayla’s first tax-paying job, as she refers to it was a licensed lifeguard when she was around 15. While you would think that having a license was enough to qualify them for employment, Kayla said that they had to drag cement blocks from the bottom of the pool to prove they were strong enough for the job. She still managed to pull it off, and while it rained every day during the entire summer, Kayla was proud of her achievements.

10. Her first unofficial job almost got her arrested

The journalist has always had a knack for making money, so at ten years old, she was already doing business. During the Olympics, she, her brother, and cousin made friendship bracelets in the Olympic rank colors. They sold $1,000 worth of bracelets, and the police wanted to arrest them for operating a business without a license. However, her father stepped in, and they escaped some jail time because he argued they were children.