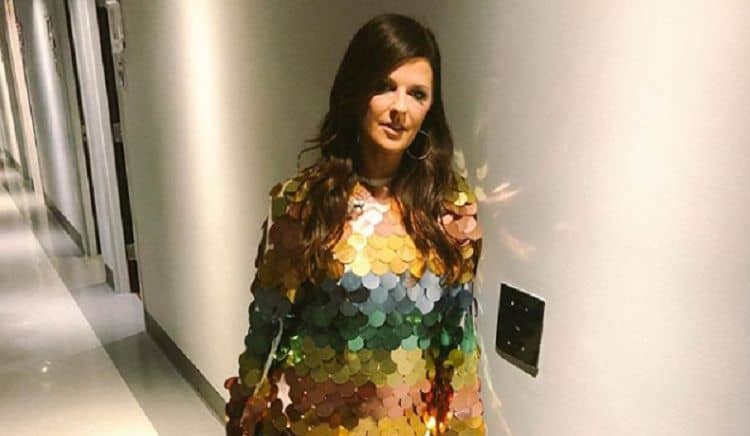 Karen Fairchild is one of the four band members in country music group ‘Little Big Town’. The other three members consist of Jimi Westbrook, Kimberly Schlapman, and Phillip Sweet. The group, founded in 1998, continues to attract new fans for two main reasons. First, they have stayed together since inception. Second, they are still releasing beautiful and meaningful music two decades later. All the four members play a part in their vocals, and each of them gets a chance to lead while the rest add to the harmony. Additionally, Westbrook and Phillip Sweet play rhythm guitar, while Karen is a songwriter. In this article, we reveal 10 things you didn’t know about Karen Fairchild.

1. She Was Born in Gary, Indiana

Her profile on IMDB mentions Karen as both an actor and a music star. She was born in Gary, Indiana, on September 28, 1969. She spent most of her childhood in Marietta, Georgia. Karen went to Samford University in Birmingham, Alabama. It was at Samford that she and fellow band member Kimberly Schlapman met. Karen has one sibling, Kelly Fairchild.

2. She is Married to Jimi Westbrook

Karen is married to band member Jimi Westbrook. They married in May 2006. They both formed the band in 1998. After her divorce, Karen worked side by side with Westbrook for 8 years as their love grew gradually. They finally tied the knot in a small ceremony in Nashville. They, however, kept the nuptials quiet and fans did not learn of the marriage until months later. This, however, was not Karen’s first marriage. It was not Jimi’s first marriage either. The two likely had eyes for each other long before they both got divorced. However, for the band and their working relationship, they kept it all under wraps for as long as they could. The couple is very supportive of each other and the relationship adds to the magic of the music and the band.

Jimi and Karen have an only child, Elijah Dylan Westbrook. Elijah was born in 2010 and will celebrate his tenth birthday in March 2020.

4. She has Good Taste in Interior Decor

The band spend a lot of time on the road and Karen has played a huge role in making their tour van feel like home. In an interview with House Beautiful, Karen admits her style is about furniture that both tells a story and adds a bit of whimsy. “I love having things with a history or a story sitting alongside an uber-modern piece. Every room and every outfit needs something unexpected,” she says. Her style also means she loves Nashville where they live because of its rich history and culture.

5. She has Worked with Christian Vocal Group -. Truth

Before the band, Karen first started music and performance in a Christian vocal group called Truth. The band, Little Big Town, has a fascinating history. Upon launching the band in 1998, the four launched their debut album by the same name in 2002 at the 2014 CMA Awards. Their music featured on the Monument Nashville label. Another album, The Reason Why, climbed to No 1 on the American music charts, earning them a place among country music icons.

7. She Loves Sharing with Fans about Her Family

Her Instagram account is always abuzz with news, mostly about her son and her husband. Karen is not afraid to put her real-life on display. Not all her updates are perfect, but they show a family that loves being together. Bonding moments between her son and his father, Jimi, are common. The couple has created a beautiful balance between a family and a busy professional life.

8. She Maintains an Excellent Working Relationship

The working relationship of the Little Big Town four is like a mushy soap opera laced with a good vibe. Some observers have gone as far as describing the harmony between them as “one big marriage.” That Karen is married to one of the band members only adds to the appeal of the band’s story. The band members have been supportive of each other over the years. A good case in point is when Kimberly tragically lost her first husband. She later married in 2006 and her husband is one of the group’s most ardent fans. He travels with the band as often as he can.

9. Her Relationship has Impressively Lasted Long

What many fans would want to know is how Karen and Jimi get along? They have been together for all 22 years of the band, 14 of those as husband and wife. It is not lost on the observer that when you work in a music band and are married, the two are together a lot. Yet, their camaraderie shines through in their music. Their song “Your Side of the Bed” is one such piece; a sexy duet revealing the magic between them. Speaking to Us Weekly in 2010, Karen admitted that being together 24 hours a day was challenging. Couples occasionally need a break, but when they both work and live together, it is important to have a good thing between them.

10. She Has Released Some Controversial Songs

Karen is right in the middle of the controversy that goes with some of the music released by Little Big Town. She wrote “The Daughters,” their song released in 2018, which triggered their most recent controversy. The Grammy-nominated song struck a nerve among conservative listeners. Part of the chorus lyrics read “I’ve heard of God the Son and God the father/I’m still looking for a God for the daughters.” It highlights the double standards that society upholds; one for women and quite another for men. Little Big Town is adding to the voice that says women have a right to tell their stories too and they should not be afraid of telling their truth as they live it. Karen believes that women need to stick together and speak up for one another as this narrative is turning. In 2014 their song “Girl Crush” hit the airwaves and most listeners thought it was a song about same-sex relationships. It eventually won two Grammy Awards and two CMA Awards.

Karen Fairchild is a singer and songwriter with the country music band Little Big Town. She is married to band member, Jimi Westbrook. The dynamics of the group make it a favorite amongst America’s country music fans. They not only sing beautifully, but their songs contain meaningful lyrics.