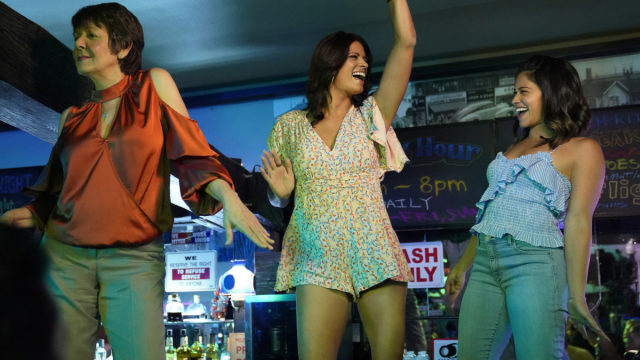 Jane the Virgin may have suffered a breakup, but she’s not slowing down. Breakups, like all grieving processes, have stages of recovery (unless you’re Petra and you feel no grief for your psychotic family). The first step is denial. To deny the pain she feels over her breakup with Adam, Jane takes Xiomara and Alba on a road trip that doubles as her book tour. The girl’s weekend leads to some tough love, but it’s followed by dancing, so it’s okay. It’s actually better than okay, considering there is not much love going on back home.

Jane and Xiomara are on a little bit of an ‘I Hate Men’ tour while they are on the book tour. Xiomara can’t really stay mad at Rogelio forever. Yes, his confession that he suspected Xiomara had given birth to Jane was horrible. But they have come so far in the last five years. They’re married, they’re a family, and nothing is going to tear them apart now. Xiomara just needs some space. Jane just needs to punch something. She’s going through all the breakup stages, but these are not pretty phases. The stages of breakup grief need to be processed in private, not in front of Iyanla Vanzant, of OWN’s Iyanla, Fix My Life. Sure, Iyanla does fix Jane, but inevitably our heroine falls apart once more.

This, plus a terrible book review, puts Jane in a horrible mood. And now friends, I’m going to tell you something that Jane figures out, and all Latino kids learn the hard way. The older your grandparents get: Don’t. Give. Abuela (or Abuelo, because the gender neutral applies here). Tequila. The result is loud and messy, unfiltered, and not as cute as it is when you’re in your 20’s or 30’s. Alba was already a bit sensitive, having run away from Jorge’s marriage proposal. She needed need to be accosted about her age. Jane also knows the cure for that–dancing.

Back home, Rafael and Rogelio are on Mateo duty. It brings up a lot between them, particularly when Mateo gets sick. Rogelio calls Xiomara instead of Rafael. Rogelio was understandably overwhelmed. It’s not that Rogelio doesn’t like Rafael,  he just never liked the idea that Rafael could replace Michael. He thinks it’s only a matter of time until Jane and Rafael get together. However, Rogelio needs to respect Rafael as Mateo’s father. It would be especially hypocritical of Rogelio to disrespect Rafael in this way, given how much difficulty Rogelio has had with Esteban. Ro and Raf have to come to an understanding, at least while Rogelio recovers from the sickness his grandson gave him. Rafael ends up helping Rogelio and Xo, because he points out that Xo was wrong to run away. Stubborn as she is, Xiomara has to take some responsibility here too.

We all know Rogelio is right about Jane and Rafael. Rafael is the one who has been a rock for Jane, even before they knew each other well. He was the first person to encourage her to pursue writing, and has continued to do so no matter the circumstances. In flashbacks, we learn that Michael’s mother blamed Jane for his death. If Rafael hadn’t given Patricia Jane’s first draft, there would never have been peace between the two women, and Jane’s book would never have been published. Rafael sometimes knows Jane better than she knows herself. No one else knew how Jane’s fear of illness stemming from Michael’s death was stressing Mateo. Rafael was the first to know, and he knew he had to protect both his son and Jane. Jane and Rafael can come up with a number of excuses as to why they shouldn’t be together, but we all know these two are endgame. Judging by that epic kiss Rafael gives Jane, he knows it too.

Lest you think that was the OMG moment of the Winter Finale, think again. Anezka returned from the dead, only to binge watch Game of Thrones, decide she was Sansa (to which I say, “Not in a million parallel universes!”), and then die again during an altercation with Petra. Don’t worry, this time she is really dead.

What was your favorite OMG moment of the Jane the Virgin winter finale?

After a whirlwind book tour, Jane the Virgin kills one bird, and reignites a long burning flame.