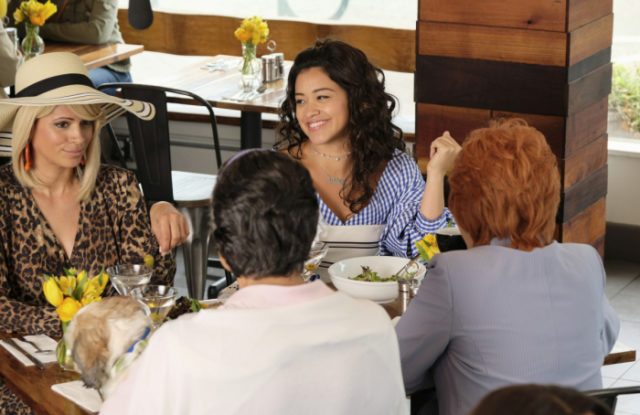 What does it take to get Jane the Virgin back into non-virgin territory? A tribute to Sex and the City sounds pretty good. Circumstances put Jane in the role of Carrie Bradshaw, pondering through her writing if casual dating is possible for a young widow. (Ten guesses what Jane’s version of Samantha thinks about this.) There’s just one little hiccup in this comparison: Carrie never had a 4-year old to explain artificial insemination to.

Jane channels her inner Carrie for a guest column with Cosmopolitan online now that she’s casually dating Fabian. Jane’s fun, flirty fling turns more into a book club. Not that I can’t appreciate a man who reads. On the contrary, it’s one of my requirements. Fabian makes himself even more desirable to Jane by admitting he’s been reading so much so that he doesn’t get too intimate with Jane too quickly. No sooner does Jane start feeling uncomfortable with this than it is compounded by Fabian’s desire for Jane to meet his grandmother. Then he goes and pulls a Tom Cruise like he’s on Oprah! It’s all just way too much. Eventually Jane and Fabian are able to clear things up so that their intentions are clear. Jane may have been a virgin till marriage, but that’s no reason to be a nun for life. Hallelujah, Jane is back in the saddle again!

Petra goes off into the wild with Chuck, not knowing he is the mysterious “JP” to whom Scott was referring before he died. However, Chuck is innocent. The only thing he is guilty of is meeting Scott once or twice, and coming upon a mysterious woman on the beach the night Scott died. I’d place bets on the woman in question being Rose in disguise. Whoever was on the beach is out in the open long enough to distract Petra from Rafael’s declaration of love.

Rogelio and Xiomara happily announce their engagement, but I think we are all in agreement that a small, intimate wedding is not their style. Xo and Ro are soul mates, but they are parents first. The whole reason they initially decide against a big wedding is out of consideration for their daughter’s feelings about her wedding to Michael. That was a lavish, heartfelt affair. Xiomara and Rogelio would like that type of ceremony, but only with Jane’s blessing. Why wouldn’t Jane want her parents to marry in the ceremony of their dreams? We all know Michael will be there in spirit, beaming at the moment he saw coming all along.

A big part of the reason Jane just needs a fling is because she aside from building her career, the only thing she cares to dedicate her time to is her son. Because of the gossipy parents at Mateo’s school, Jane suddenly has to explain to her son where babies come from! Seriously parents, have some respect for how all families are created. Would you want to give your child the sex talk at the age of 4? The typical ‘birds and the bees’ story would not fly on this one. Thus, Jane and Rafael have to explain to Mateo how he came to be. I’ve gotta say, Jane and Rafael did a great job with that talk. Mateo even walked away thinking that he is a miracle, and in a way, he kind of is.

Jane took a very big personal step precluding sex from marriage. Did she make the right call for her?

Jane the Virgin takes a unique approach on the Sex and the City narrative, with Jane playing the role of Carrie Bradshaw.