Home
Television
Is Soldier Boy The Real Villain Of The Boys? 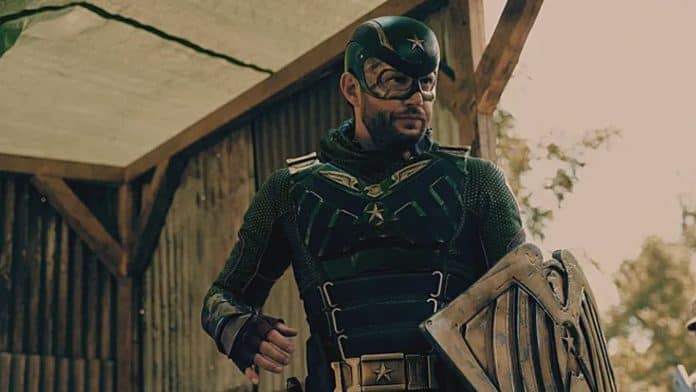 Imagine Captain America on his absolute worst day ever and you’ll get Soldier Boy, the twisted mirror version of the star-spangled hero. Just like Cap was in Marvel Comics, this mysterious war veteran/costumed hero was the first American non-aging Supe of the Boys universe. And also like Cap, this guy was experimented on by German scientist with the intention of creating their own super soldier. The key difference is that Steve Rogers was given the Super Soldier Serum to combat the Nazis during World War II. America’s first actual superhero and a true patriot who served his country simply because he loves America. Soldier Boy, on the other hand, is quite literally everything Captain America isn’t.

If you’ve been keeping up with the Boys series on Amazon Prime, you already know where the inspiration came from. Every Supe was based on a more heroic superhero from Marvel or DC Comics. For instance, Homelander is based on Superman, Black Noir is based on Batman, and A-Train is based on the Flash. And of course, each of those so-called “superheroes” are polar opposites of their DC counterparts. Soldier Boy, however, is a slightly different case. And I really do mean slightly.

Whereas the Supes of The Seven are based on DC’s Justice League, Soldier Boy’s team, known as Payback, were based on Marvel’s the Avengers. Fittingly enough, as Captain America is the leader of the Avengers, Soldier Boy is the leader of Payback. A critical difference is that Cap is widely beloved by his team and heroes all over the Marvel universe. For those who are fully caught up with The Boys, you’ll know that Payback doesn’t feel the same about Soldier Boy. Not even close.

If you’re not caught up with The Boys, I’m about to dive into some deep spoiler territory. If you’re not caught up, you might want to click away and get on Amazon Prime right now. And word of advice, don’t eat a big meal beforehand. The Boys is not for those who have weak stomachs. The most recent episode, “Here Comes a Candle to Light You to Bed”, ended on a seriously game-changing note. Spoiler alert: Homelander is revealed to be the biological son of none other than Soldier Boy. Whoa, now that is some serious deviation from the comics. As if they couldn’t separate the show from the comics, enough the writers throw us the ultimate curveball. It turns out, Soldier Boy is a much more vital character to the series than we may have originally thought.

Hey, I’m okay with this, considering he has quickly become a fan-favorite. Like most of the other Supes of The Boys universe, the man is a really douchebag. That is putting it very lightly. However, unlike the other Supes, there are some likable qualities about him. He is extremely vain and narcissistic, but unlike his fellow Supes, he is competent and brave in chaotic situations. He’s the only member of Payback who actually fought like a Supe, although his military service was widely propagandized. And if we really want to give credit where credit is due, he actually stood up to Homelander. And guess what? He was able to duke it out with him mano-a-mano. How many other Supes would actually have the stones to even stand up to Homelander? Not very many, but America’s first war hero Supe is the one. Sorry, Cap.

But back to the eye-popping revelation from the latest episode. Soldier Boy is technically the biological father of Homelander after Stan Edgar used the former’s sperm to create Vought American’s newest top superhero. As the name implies, Homelander is Soldier Boy’s predecessor and supposedly the upgraded version. And after being experimented on by the Russians for forty years, Soldier Boy has been given a significant upgrade of his own. With his newly found nuclear-channeling powers, Vought’s first star superhero now uses the radiation he emits from his body to negate the powers of other Supes.

With this new ability, along with his many years of experience and super strength, he is ideally the perfect weapon to kill Homelander. But as it turns out, like father like son. Soldier Boy is just about as “heroic” as Homelander is. In other words, he’s a phony superhero who cares very little about being a real hero. After forming a fragile alliance with Hughie and Billy Butcher, everyone seems to learn more and more about the true nature of Soldier Boy. In fact, not only is he a fake superhero, but quite possibly the true villain of The Boys series.

From the very beginning, everyone thought that Homelander was the ultimate antagonist of The Boys. But after his encounter with his “father”, we have finally seen him at his most vulnerable. Probably for the first time ever, Homelander felt weak and realized that he can be killed. And after seeing his reaction when Soldier Boy revealed who he was, it looks like his fears are starting to consume him. The end of season three can only end with the death of Soldier Boy or the death of Homelander. Who will it be?

Well, we know that the series has been renewed for a fourth season, so regardless of the outcome, there’s still a story to tell. But even if Homelander dies, there will still be villains to fight. Will Billy Butcher make a full heel turn and become what he hates? Will Vought find a Homelander successor to save the company? All are likely possibilities, but the emergence of Soldier Boy has set a new stage for The Boys.

After learning of his true identity, on top of how he intimidates Homelander physically and mentally, not to mention his unpredictability and inability to control his powers, I think Soldier Boy is on his way to becoming the new main antagonist of The Boys series. He still has a role to play with Butcher and Hughie, but it will be very interesting to see how his next confrontation with Homelander will play out. If he fails, then he dies, simple as that. But on the off chance that he succeeds, he’ll likely won’t stop there. Then again, he has shown to be not nearly as psychopathic as Homelander. Despite his flaws, Soldier Boy does show that he has somewhat of a conscience.

The show can throw us another curveball and give Soldier Boy the heroic ending everyone thought he had back in 1984. It looks like the show is giving more of the seemingly irredeemable Supes of The Boys more heroic endings. For Soldier Boy, I feel like it can go either way, given that he does show some signs of humanity, especially compared to his “son” Homelander. What are your thoughts?