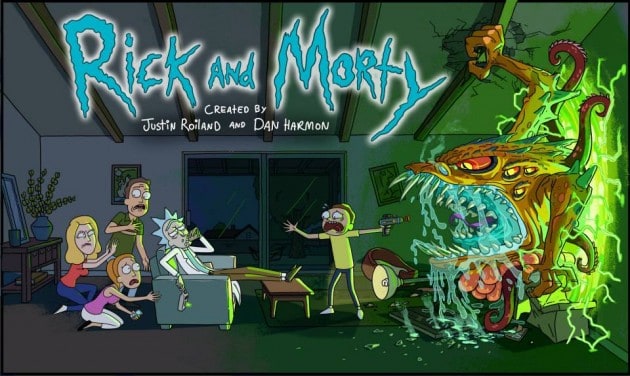 It is pretty well known across the web that I am a rather avid Adventure Time fan. I am also a rather rabid Community fan. So when I found out Justin Roiland, who voices Lemongrab on Adventure Time, was working on a  new animated show with Dan Harmon of Community fame, I needed to know more. A week later, I have been lucky enough to watch a few episodes of said show, Rick and Morty, and can tell you from the stand point of “nerd who likes to laugh”, that this show is golden. Featuring the, and I quote directly from the mouths of one of the characters on the show, it is “high-concept sci-fi rigmarole”. I will add, “at its most hilarious.”

Rick and Morty is about an old, dare I call him mad, scientist who comes “home” to stay with his daughter Beth, and her family. Beth (played by the awesome Sarah Chalke) is married to Jerry (played by SNL alum Chris Parnell) and they have two younger children. Summer is played by Spencer Grammer (daughter of Kelsey) and Morty (who is played by Justin Roiland himself, who also voices Rick). The show mainly revolves around the misadventures that Rick stakes Morty on. But this is half the fun of the show. It really is high concept science fiction. We have wormholes, portals, and stargates, oh my!  They even play off such lofty concetps as string theory and the multiverse. What is great is, in between all of this brilliant science, there is madness. Creatures that cannot be described. Worlds that are are absolutely fantastic to look at, but hide some cool and creepy surprises. I won’t ruin anything for you, but it is one heck of a ride. I was lucky enough to get some time with Rick and Morty’s creator, Justin Roiland, and we got to talk in-depth about what animated shows inspired him, what it’s like to work with Dan Harmon, and what crazy directions  he intends to take the show.

The first thing most people will notice when not laughing is that Rick and Morty seems to have a real genuine affection towards the genre of sci-fi. What are some of the things that influenced you from that genre?

Justin: I have had a natural, life long proclivity for sci-fi. I have always been drawn to it. I am really into theoretical physics and quantum physics and the bizarre nature of the universe like what could possibly be real versus what could possibly be not real and the potential of the inifnitly expanding galaxy and string theory and so on. As the seasons go on, we really dig into that stuff deeper and deeper and get to explore it to a much greater degree. Truth is Dan and I have developed stuff many times together over the years, and only recently did i figure out that pretty much all of it has sci-fi themes. (editor’s note, go watch House of Cosbys on Youtube to see just how right he is).

Justin: For me, a big one the My Teacher’s an Alien book by Bruce Coville. Those had a huge impact on me from a very young age. Dan, on the other hand, is much more sophisticated, like Hitchhikers Guide and a lot of the British sensibilities that went along  wit the genre.

(Let it be known at this point, dude had already blown my mind)

You can fell that Science Fiction love in the intro theme, which sounds like a sort of nod to Doctor Who, if I am not mistaken?

Justin: The theme song is written by the guy who wrote the Wizards of Waverly Place theme song, who is avery good friend of mine. I told him I was a big fan of Farscape and that I wanted to combine Farscape’s theme with Doctor Who’s theme, and that’s basically what our theme song is. It’s this amazing original piece that takes the best aspects of those two themes and mashes them together. Super Sci-Fi.

(At this point, I kind of geeked out about how much I dug Farscape and how it had the best creature design and character evolution of any sci fi show on TV, and we nerded out for a moment about Farscape. Justin even told me how he has tried for years to get Dan Harmon to watch the show, but he never can get into it. I also found out Abed’s love of Farscape on Community is a direct inside reference to Justin Roiland trying to get everyone into it. It was awesome, I won’t lie. Then I regained my composure and remembered I had to ask actual questions)

Speaking of Dan Harmon, so you guys plan on sprinkling in any running jokes or easter eggs or even inside jokes that recurring fans will pick up on. I know that is a big part of how Dan writes Community and how it got such a cult following.

Justin: WE definitely have some themes and inside jokes that appear more than once. Sort of like creative serialized tent poles. You can watch the show out of order, each episode is very self contained. But for anyone who watches it in order as a whole season, there is so much to enjoy that has been subtly serialized, which I think is really cool. We also set up some really cool things that we can potentially go back to in the event of a second season. Dan Harmon is brilliant, and I am very blessed to have someone like him guiding the show with me and making it as good as it is. His mind is intimidatingly brilliant.

So it must be really cool to be able to bounce ideas back and forth with Dan Harmon, huh?

Justin: He is so cool and supportive, but he has said it to me so many times, ” this is your show. I’m here to help you make it good. He has basically opened up his tool chest of extraordinary writing talent to me and to the show and as a result, has elevated it. I also get a ton of freedom to change dialogue between Rick and Morty to make sure it’s more natural sometimes than what’s scripted.  But we play perfectly off of each other’s strengths, Dan and I.

So how exactly did you and Dan fall together as a creative team?

Justin: I’ve known Dan Harmon for about ten years now, and we met because of Channel 101. I fell in really early and had some other people I was writing with before. Some of us moved in different directions, and me and Dan started collaborating. We had done a skit with Sarah Silverman and a few other people for channel 101. But it was back then, channel 101 that was the basis for this show, and my entire career. I don’t know what I would be doing right now if Dan hadn’t helped create channel 101, to be honest.

So allow me to ask, what cartoons inspired you growing up, or made you want to make Rick and Morty? Did you always know you wanted to do animation?

Justin: In my wildest dreams I had wanted to do animation, I just never really believed that I would. It was a very pie-in-the-sky dream, but I have been moving in that direction forever and a big inspiration was Ren and Stimpy and John K (SPUMCO). I had been watching cartoons my whole life, but that cartoon in particular came out when I was 12, and I remember it changing my whole perspective on what could be done in the current era of animation and just the idea of creator driven content and not the cookie cutter animation machine like what Filmation was doing at the time. Ren and Stimpy was clearly something coming from one person’s vision and voice. To even push it further, several years later, Mike Judge and Beavis and Butthead. To see him back then, knowing he was animating, writing, and talking to himself, it is very surreal to find myself in a similar situation on this show. If I could have gone back in time and see that I would end up doing what Mike Judge was doing, I would have never believed it. I used to walk around doing Beavis and Butthead impressions with my friends. It blows my mind that there could potentially be kids walking around, doing that with my characters at some point down the road. But yes, Beavis and Butthead and Ren and Stimpy were the flagship inspirations when it comes to animation for me.

At this point I told we are pretty much out of time. I held my fanboy long enough, and asked Justin if he would do Lemongrab’s key saying for me. He obliged, and my little nerd heart exploded with joy.

Rick and Morty debuts on Adult Swim on December 2nd at 10:30 p.m Honestly, you would be a fool to miss it.