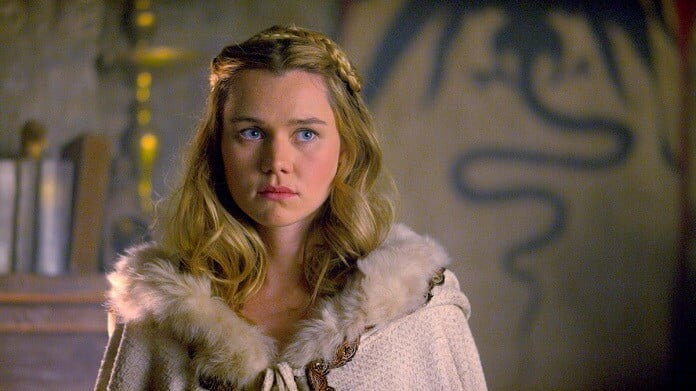 Some actors spend the majority of their career waiting for a big break, but Imogen Waterhouse has already gotten hers. The young actress is best-known for her work in the TV series The Outpost, an opportunity which came just four years after her on screen debut. Through her role as Gwynn Calkussar, Imogen has gotten to share her talents with the world. The complexity of the character has allowed her to tap into her wide skill set and fans and critics love what she brings to the show. Her resume may not be long at the moment, but the quality of her work has been superb. Keep reading for 10 things you didn’t know about Imogen Waterhouse.

1. Her Father Is A Plastic Surgeon

Acting, like anything other skill, requires lots of practice. There are lots of opinions on the best ways to get that practice, but Imogen decided that getting a formal acting education was the right path for her. She studied acting at Oxford School of Drama. The school boasts a long list of notable alumni including Claire Foy.

Imogen’s introduction to being in front of cameras was actually modeling. In 2014, she signed to the international modeling agency, Next Model Management. Ultimately, she decided that she wanted to focus her attention on acting and she chose to leave modeling behind.

Imogen is all about leading a healthy lifestyle and she followsa vegetarian diet. Unfortunately, this can sometimes make it difficult for her to find good things to eat when she is filming. For example, while in Serbia filming for The Outpost, she told Standard.co that there weren’t a lot of vegetarian options.

5. She’s No Longer On Social Media

Any of Imogen’s fans who attempt to find her on social media right now will be very disappointed. Although she was active on Instagram in the past, her account is no longer active on the moment. There’s no information on why she chose to remove herself from the platform.

6. Her Sister Is An Actress

Imogen’s parents may not be entertainers, but her siblings are. Her older sister, Suki, is a well-known model and actress who has appeared in several movies and TV shows. She has modeled for major brands such as Burberry and Pepe Jeans. On top of finding success as a model and an actress, Suki is also a talented photographer. Imogen’s sister, Madeleine, is also a model.

7. She Doesn’t Do Many Interviews

Interviewing is one of the most common ways for celebrities to share information about what they have going on. Even though she is getting closer and closer to becoming a big star, Imogen doesn’t appear to have done many interviews. There’s no explanation as to why, but there is a chance she just prefers not to.

There’s no denying the fact that Imogen’s schedule is probably really busy. She may not have time for a lot of things, but one thing she does have time for is her dog. She is a proud pet parent to her adorable dog Marvin. Not only are they best friends, but he also doubles as her workout partner when she needs a little extra motivation.

9. She Likes To Read

Even if you’re not a morning person, you have to admit that it always feels good to get a positive and productive start to the day. This is something that Imogen tries to do every morning. In a video with British Vogue, Imogen showed her morning routine and shared that she she likes to start the day by catching up on some reading while relaxing in the tub.

10. She Has An Interesting Secret Talent

Do you have a secret talent that would totally shock people if they knew it? Imogen Waterhouse does. During an interview with Teen Vogue, Imogen revealed that her secret talent is that she can make her “left eye look like it’s a broken doll’s eye.” I’m not entirely sure what this means, but it does sound pretty creepy. If she ever gets the opportunity to do a scary movie, this talent might just come in handy.