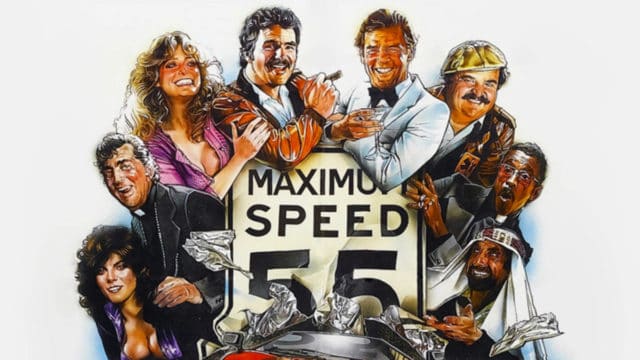 As most of you know by now, remakes, reboots, re-anythings are always on a case by case basis for me.  As a quick reminder, I have some criteria for something getting rebooted.  First of all, a good amount of time has to have elapsed since the original was released.  I think 15 years should be the minimum.   Second of all, it’s gotta hold up in some way and have a plot that’s worth revisiting in the present time.  Sure there are more criteria but these are the basic requirements in my mind.   One such movie that’s been announced to get the reboot treatment is Cannonball Run.

The Cannonball Run, directed by stuntman Hal Needham, was a 1981 comedy featuring a group of teams set to engage in an illegal cross-country car race. The meta comedy showed the teams playing dirty tricks on each other as they tried to become the first ones to reach their destination. The film featured a cast packed full of famous actors, including Burt Reynolds, Dom DeLuise, Roger Moore, Farrah Fawcett, Dean Martin, Sammy Davis Jr., and Jackie Chan. The film spawned two sequels, with Cannonball Run II hitting theaters in 1984 and Speed Zone hitting theaters in 1989.

So what’s going on with the reboot?  Dodgeball and Central Intelligence director Rawson Thurber is in negotiations to direct a reboot of The Cannonball Run, Deadline reports.  The upcoming movie, which comes from Warner Bros., is said to be a “relaunch” of the franchise, rather than a direct remake, although no details were given on what that would entail. Thomas Lennon and Robert Ben Garant, the team behind The Night at the Museum franchise, are in talks to write the reboot.

I could totally see this working with the right cast.   In this day and age think about all the awesome car possibilities.  Remember the first movie was all the way back in 1981 and the cars in that film ruled.   Today?  I can’t even imagine what they’d be throwing onto the screen.  We’ll keep you posted as this movie starts to develop.

P.S. I think Dwayne Johnson has to have a part in this movie.