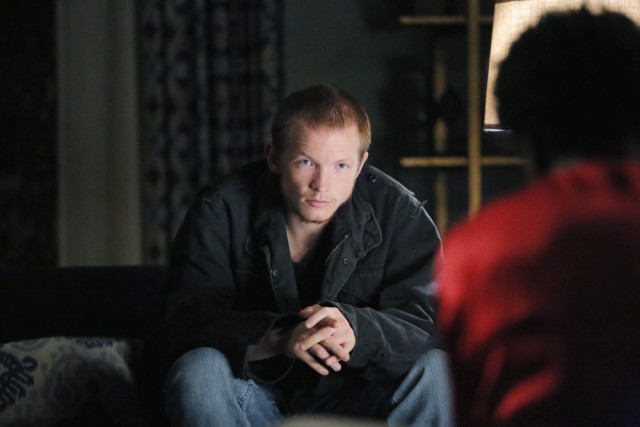 We’ve reached the midpoint of the season on How to Get Away With Murder, and we’re getting closer than ever to answers about what’s really going in in the flash-forwards. Let’s take a look at what happened in this week’s episode, “Hi, I’m Philip.”

As always, the episode opens in the future as the interns talk with Bonnie after they witness Sinclair’s death. They deal with the fact that they all made a decision together, and Bonnie takes the gun from Wes. We’ve seen a lot from Bonnie so far this season, and I want to believe somehow that anything she does is for the good of others, but we probably won’t find out her exact motivation until the timeline finally catches up.

Jumping back three days, Nate meets Annalise at her house. She reluctantly invites her in as Philip and Oliver have a confrontation at the apartment. Nate and Annalise make an effort at working through their issues, but it’s clear that neither of them are in the right frame of mind for that particular conversation. Conner, meanwhile, gets back to the apartment to find spilled milk and a missing Oliver. He immediately runs to Annalise for help. With Nate already there, he joins Annalise, the interns, and Frank as they try to figure out how to solve this particular problem. Before anything happens, though, Oliver and Philip show up at the office.

Philip and Oliver reveal that everything has been a huge misunderstanding, but he does decide to blackmail Annalise for something later on. While he tells them who his real birth parents are, the interns decide to secretly do a DNA test to find out whether or not he’s lying. As happy as I am that Oliver is still alive after the cliffhanger ending of last week’s episode, I’ll admit that it almost felt like a cop-out with no big danger coming to him. Again, I’m glad he’s still fine because he’s become one of my favorite characters on this show, but I wonder if there weren’t a better way of getting us to this point in the story.

Sinclair decides to offer the siblings a plea deal, which Annalise realizes is a sign that she’s scared that she doesn’t have enough to convict. Despite the fact that they’re (presumably) innocent, they consider taking the deal because it’s fewer years in jail than it would be if they were convicted. Looking past the implications to this particular story on the show, I like that the writers are tackling such a hot-button issue. The fact that they’re actively discussing the real-life scenario in which innocent people take plea deals because they feel it’s their only option is an open acknowledgment that they feel we need reform in this area of our system of law.

We get a great little montage in the middle of the episode as the interns discover that the office has been bugged, and they begin to look for it. Once they find it, they use it to feed Sinclair false information in order to help out the siblings. This was a really fun little sequence that wasn’t exactly comedic, but it definitely relieved some tension for a moment while still progressing the story in a big way.

I’m going to keep from talking specifically about the reveals that we got in the second half of the episode, because quite a bit of what we saw should have a major impact on Annalise’s shooting and the immediate aftermath. I will say that we got to see Frank do whatever was necessary to please Annalise, and he continues to intrigue me as a much more complex character than I anticipated at the beginning of the series. We also got some great character moments among the cast that will directly impact what’s to come on the show, and there was a fun and lighthearted sex montage that was very welcome after so much darkness lately.

“Hi, I’m Philip” was a solid episode of How to Get Away With Murder that, despite a couple of flaws, has finally gotten us right to the point that we’re going to find out exactly what leads to everything we’ve been waiting on in the show’s flash-forwards. Next week’s episode is finally going to answer the question of who shot Annalise, and I absolutely can’t wait to see what happens.

What did you think about “Hi, I’m Philip”? Are you ready for answers on this season’s How to Get Away With Murder mystery? Let us know your thoughts and speculations in the comments down below!