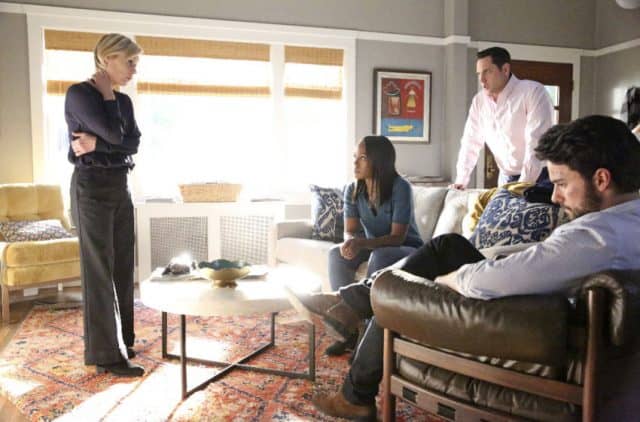 How to Get Away with Murder returned in a pretty impactful way last week with its midseason premiere, and that episode opened up a lot of avenues for the rest of season three to explore. Let’s take a look at what happened in this week’s new episode, “Not Everything’s About Annalise.”

If you’ll remember, we saw last week that, before dying, Wes got into Frank’s car so that they could talk. It turns out that Wes did in fact tell Frank that Annalise is under investigation, and he also announces that he just might turn Frank in for killing his dad at the end of season two. It really seems like Frank may be telling the truth about killing Wes, right? Frank tells this whole story to the investigators in the present, but they just don’t believe him entirely (despite security cam footage showing that Wes did get in Frank’s car).

Nate is sent to talk to Laurel at the hospital to find out if Frank even knew about her being pregnant (part of the story that Frank told the investigators), but Laurel still isn’t talking. I’m really loving the fact that Nate finally has something to do on this show again, because he was definitely a weak link for too long. It’s about time that he’s finally back in the action. After Nate leaves, Laurel ends up calling Bonnie and tells her that Frank couldn’t have known about the pregnancy, and both women understand that Frank is most certainly lying to protect Annalise.

Once again, I’m so impressed with the relationship that’s being built between Laurel and Bonnie. Both of these characters (and their actresses) are so powerful with How to Get Away with Murder, and having them work together works so well here.

Bonnie lets the rest of the gang know what’s been going on, and Bonnie suggests to Connor that he get Oliver to hack into the computers containing the evidence on Annalise so that the team can really know what the investigators have on her. Unfortunately, though, Connor told Oliver last week about everyone being involved in Sam’s murder way back in season one, but they’re all convinced that Oliver is the only way to figure out what to do. It takes some convincing (mostly from Michaela), but Oliver agrees to help. Shockingly, Oliver finds out that Annalise is being investigated for a multitude of murders that we’ve seen on the series. We all know, though, that Annalise didn’t actually murder any of these people. Who could really go down from this investigation? Everyone else.

In the end, Laurel manages to convince the investigators to believe Frank’s confession, but it turns out that Annalise is still being charged as a co-conspirator. Additionally, we find out that Bonnie also knows a little more about Wes’ final hours than she has led everyone to believe. What’s happening? We’ll have to wait and see how things play out.

While there were elements of this episode that fell a bit flat (what good did Frank’s confession actually do?), “Not Everything’s About Annalise” was still a strong episode that progressed the story nicely. I’m very invested in the story of this season, and I can’t wait to see what happens next.

What did you think of this week’s new episode of How to Get Away with Murder? What are your predictions for the rest of the season? Let us know your thoughts in the comments down below!

How to Get Away with Murder Season 3 Episode 11 Review: "Not Everything's About Annalise"

While there were elements of this episode that fell a bit flat, “Not Everything’s About Annalise” was still a strong episode that progressed the story nicely.