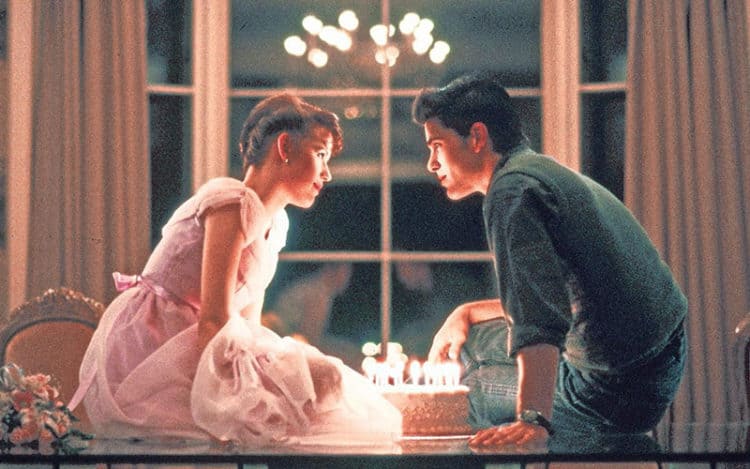 Plenty of people would argue with this statement without a doubt, but like it or not, Sixteen Candles has aged quite well no matter how many hypersensitive individuals want to claim that it’s so filled with horrible images and ideas that it should be taken out and burned. First what anyone might need to do is tell those folks to calm down and realize that back in the 80s things WERE different. It’s not an excuse, it’s a fact, and the oversexualized teenager in the movies of the 80s was a way of life, and it was a caricature that was so overplayed and over the top that many people today forget that there are plenty of movies showing disturbing subjects that they call ‘art’ and ‘high class’ because they cater to the current generation. Call Me By Your Name, anyone? Clueless? The Edge of Seventeen? Those that are speaking in righteous tones when discussing how ‘bad’ the 80s movies are might have never watched them since if they had they might take note that for every bad thing that happened or was said in this movie, there was a resolution. It might not have been a perfect resolution, but it was there, and it was a step in the right direction. The condemnation of a movie that people didn’t agree with, and was even lambasted by one of the stars, who now speaks like a person with buyer’s remorse, is kind of amusing since castigating something that occurred decades ago while willfully missing what’s happening in movies today is a little frustrating, but more humorous than anything.

So let’s get into this by talking about one of the most glaring ‘problems’ that a lot of people notice in the character of Long Duk Dong, who has been called a stereotypical Chinese character who speaks broken English with a noticeable accent and is called “Chinaman” and is even subjected to the comical gong noise that is present almost every time he shows up. How the ‘sexy girlfriend’ line became a problem is kind of hard to see, but the funny thing about Gedde Watanabe is that he’s not Chinese, he was born to a Japanese-American family in Utah and he chose to take on the character, as well as many others in his career since he’s played caricatures of Asian individuals throughout the years. But hey, as Long Duk Dong he was funny, and he was a great bit of comedic relief since he broke up the monotony and added a bit of diversity. But it’s likely we won’t hear that since these days a lot of this material is considered horribly racist when in truth it’s a product of its time and many people still get a good laugh out of it.

Another problem area comes in the exchange between Jake Ryan and Farmer Ted, during which Jake says that he could take advantage of his drunken girlfriend Caroline if he wanted, and yet he doesn’t because he’s so hung up on Samantha that he can barely function. In fact, he even, accidentally, slammed Caroline’s hair in between his bedroom door and jamb when she stumbled upstairs during their party to talk to him. It was pretty obvious throughout the movie that Jake was done with Caroline, and that his words to Ted were little more than a reminder that as one of the most popular guys in the school he didn’t have any trouble finding a partner for sex. The thing is, he didn’t do it, but the mere mention of it was enough to anger many people since words are considered to be every bit as hurtful as any physical act in this day and age, no matter that many words were spoken in the movies these days are still allowed to run on unchecked without everyone getting into an uproar about it. Now, Jake sending Caroline off with Farmer Ted while saying ‘have fun’ was in fact kind of problematic, especially since Jake convinced a drunken Caroline that Ted was him and that he was Ted. Yet guess what happened? Ted tried to be a responsible driver while Caroline continued her drunken antics. In the end, it turned out that they apparently had sex, supposedly, and that they both enjoyed it, and were actually falling for each other. Caroline and Jake spoke to one another after, reconciled, and while not all was settled the scene ended with the feeling that they were ready to walk away. In short, things turned out for the better, no matter how many psychological theories some might want to throw at this movie in order to explain how it turned out and how it was still ‘wrong’.

The fun part about this movie comes from taking it as a joke and as a coming of age comedy that was meant to elicit laughs and not be taken seriously, since like it or not, this is not real life, no matter that John Hughes helped to give teenagers a voice. This is a parody, this comedy, and as it’s still argued today, comedy breaks the rules and makes fun of things that some folks are too embarrassed to discuss aloud. That’s why Sixteen Candles continues to be such a funny movie because it broke the rules and pushed forward in a manner that proves that some folks couldn’t and still can’t take a joke.