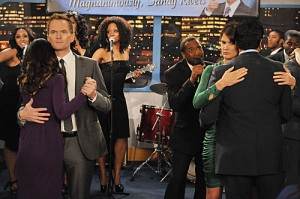 No offense to Kal Penn, but now is the time to start the ‘get Kevin off the show and out of Robin’s life’petition. I’ll be getting my jalapeno vodka mix ready to send over to CBS at any moment.

The last few seconds of this week’s How I Met Your Mother simply destroyed me. Watching Barney’s face the moment he saw Kevin and then subsequently cleaning up the roses and candles he set up for Robin in her room was just devastating. (My notes are full of expletives at this point.) It was like a Band-Aid being pulled off as quick as possible and I was left a blubbering mess.

That was some reversal of roles in their relationship though. Contrary to the beginning of the season when Robin was pining after Barney, it’s obvious that now he is the one longing for their rekindled relationship. It was nerve wracking watching Nora question whether his cheating had meant anything to him. So when he said it did and all he could think of was Robin during Nora’s father’s speech, I couldn’t help but have a gleeful smile on my face.

Yet my smile quickly turned to tears when Robin shook her head no. So WHY wasn’t his feelings officially reciprocated? I suppose I understand that Kevin’s declarations of love were so heartfelt and beautiful that Robin thought that’s what she wanted to hear but damn if it didn’t kill me and damn her that it nearly killed Barney. (Why oh dear writers why?)

So listen Robin, that is not what you want to hear. You want to be with Barney. You, I and everyone know it. So excuse my language but cut the crap, dump the shrink and marry Barney. Do it now! NOW I SAID! (Ok. Sorry, I got a little intense there.)

Great episodes of HIMYM do this. They make you feel every emotion. You yell, you cry and you laugh out loud multiple times. This episode made me angry I have to wait till next Monday for a new one and reminded me why I’ve been so invested in these characters. Well at the very least in Barney and Robin.

Ted, Marshall and Lily’s storyline left a little to be desired. The marij — nated steak sandwiches bit was funny to an extent but not the best storyline they’ve taken down this road. I’m more interested in seeing how Ted is going to talk to Barney about what he saw which seems to be what next week’s episode will target with a discussion of a life changing decision. I’m hoping whatever this decision is will help me rekindle my love with the ‘˜I’in How I Met Your Mother.

So tell me readers…What did you think? Were you as angry as I was that the prospect of Robin and Barney was dangled in front of us and then torn away? Are you mad at Robin? How do you think Ted will factor into this? Let us know in the comments below!
Prev Article Next Article