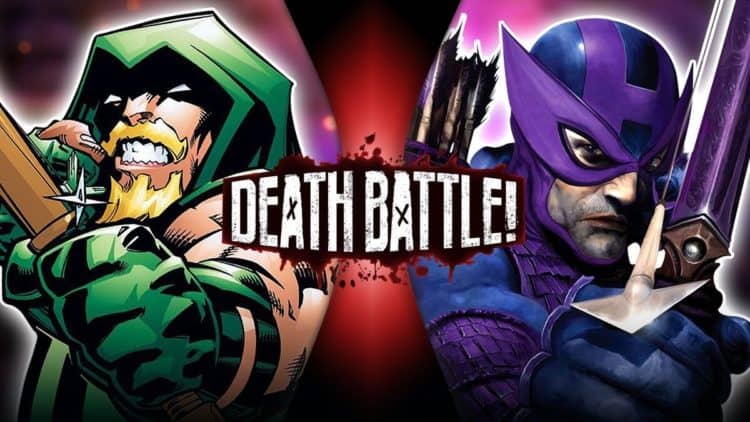 It pays to start with the idea that a character in the comics will be just as powerful as the writers need them to be, which is why some characters manage to beat others that they have no business beating in the first place in mock battles or within their own universes. When it comes to characters such as Hawkeye and Green Arrow, however, the odds are fairly even when pitting these two insanely skilled archers against each other. There are quite a few individuals who believe that Green Arrow would prove victorious since he has just as many trick arrows and better hand-to-hand combat techniques and that he was self-taught. But looking past Hawkeye is never a good idea since as an archer, Clint Barton is deadly and has next to no equal in the Marvel universe, other than Bullseye, who’s, well, not quite as celebrated but is just as deadly. But since this matter is between Hawkeye and Green Arrow, it’s easy to narrow the field and focus on why Hawkeye is a better all-around combatant.

It’s not a popular line of thought, but it is practical since while Oliver Queen is self-taught and has honed his abilities to the point where he’s always ready and always ready to do what he has to in order to protect his city and those under his charge, Hawkeye is capable of handling that and much more. As much as has changed in DC and Marvel, especially when it comes to the live-action shows, it’s tough to say which version would be able to take on which since things tend to change from the comics to live-action. But when it comes to live-action, there’s a reason why Clint Barton would be able to beat out Oliver Queen, no matter how much people want to argue.

It might be argued that Queen has far more resources than Barton since he is rich and does have access to several different sources that can help him in creating and maintaining his weaponry. Plus, Queen has a team he can rely on, which is typically a strength of Barton’s since as an Avenger he has access to resources that are far greater than what Queen can call upon. But in terms of being greater, Hawkeye is just as much of a survivor as Queen, but he has the added advantage of being able to call on SHIELD resources, but he also has the skills and necessary knowledge of how to make do with less. Yes, Queen knows how to improvise as well, and like Hawkeye, he’s a great hand to hand combatant, but there is a point that would separate the two since the clinical detachment that Hawkeye can, and has, managed to exhibit is something that Ollie is not great at, no matter how much he might try. Hawkeye doesn’t have the same strong, moral code that Oliver has, as was proven in Endgame, and this is his edge. One thing that has been shown in the history of comics and even live-action shows is that heroes tend to win because villains overstep their bounds, but when the villains do win, it’s because they’re willing to further than the heroes in terms of who they’ll hurt and what they’ll do.

This is where Hawkeye has an edge over Oliver, no matter how much anyone wants to argue since, despite his status as an Avenger, there is no point that Clint won’t go past when he finds the need. He did have a life before becoming an Avenger, and what’s more, his wife knew about that life and obviously doesn’t hold it against him. But while Oliver is brutal and capable of going ape on bad guys, he still doesn’t have the same edge that Clint has displayed, since as Ronin, Clint took on a persona that was beyond deadly and managed to slip nearly all the way to the dark side when he took it upon himself to punish criminals that had nothing to do with the tragedy that befell the world. He needed an outlet, and he took one. Despite being capable of such a thing, Oliver wasn’t about to go that nuts. Oliver has gone shady in the past, but according to the comics he’s kept close to his morals.

Hawkeye and Green Arrow might be more of a match than people want to admit, but when it comes to surviving, both men are willing to do a lot, but Hawkeye is still the more versatile between the two of them, and that’s why he’s slightly better than Green Arrow. Sometimes practicality has to take the place of morals, since survival often means that one has to strip themselves down to the bare essentials, and despite all arguments, Oliver hasn’t really been able to go that far.