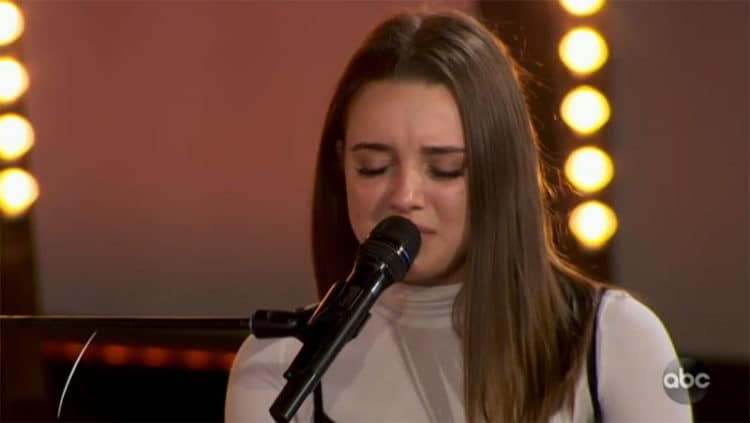 Heather Russell is a young woman who has been around for a while. She might still be very young, but she’s been making headlines for a decade. Her entire life has been about music, and she’s made it clear to everyone in her life from the time she was a little girl that being a singer/songwriter is what she’s doing with her life. She’s done it, already, too. She’s a dynamite young woman, and she’s one who is currently making headlines because of Katy Perry. It’s time to learn as much as we can about this lovely young woman.

2. She’s Been Signed with Simon Cowell

She was only 10 when Simon Cowell signed her. She started her own YouTube account, and she caught the attention of a music industry person by the name of Rob Fusari. He signed her to his own deal, and then he took her to Cowell in London to meet. He was instantly impressed with her, and the former “American Idol,” judge was quick to sign her.

It’s been 10 years since she signed with Simon Cowell, and now she’s taking her own turn on “American Idol,” in hopes of being the next big thing in the music business. She made her appearance this weekend, and she has her own golden ticket straight to Hollywood.

She’s not even from America, but that’s not stopping her from being part of American Idol. She grew up in Toronto with her mom and dad and her brother. They are all musicians, but her parents have since divorced and she no longer lives in Canada. She’s an LA girl now.

5. She Did Not Impress Katy Perry

It was mentioned earlier that she was in the press lately because of Katy Perry, and it’s because she did not impress the singer as much as she did other judges during her Idol audition. She was not at all impressed with the performance she did, and she told her that she didn’t do it any justice. It was too much for her, and she did not earn her right to sing that song that way. She did tell the young singer she has a lovely voice, but that her audition song was just too much.

6. She Was Compared to Justin Bieber

There was a time when she was growing up and becoming famous on YouTube as a child that some people thought she might be the new Justin Bieber. Remember when he was just a kid from Canada who had a talented voice and some time on the internet? It’s how he came to fame, and that’s what many people thought might happen to this young woman, too.

She might not have found the kind of fame she thought she might have as a musician, but she did release a song called “Got This Feeling,” that was used in an episode of “Pretty Little Liars,” a few years back. That’s a huge deal for a teenager from Canada.

She released her full-length album back in 2018. It was called “My Metropolis,” and it was pretty good in her home country. While it didn’t turn into a worldwide hit or a Justin Bieber-esque situation, she did debut at number 38 in Canada. It’s still a huge deal for a kid who is doing this on her own.

9. She Wrote a Famous Song

Yet another really exciting career moment for her was when she and her father wrong a song for a former “American Idol,” by the name of Jessica Sanchez. The song is called Crazy Glue, and she gets to say she’s been able to sing songs, write famous songs, and works with some very famous people.

She’s only 20, but she’s already worked with Idols and Simon Cowell, and she’s worked with people like Babyface. There is no one more famous or well-known in the music industry than Babyface, is there? She’s been able to live an entire life that most people only dream of living – and she’s only 20.