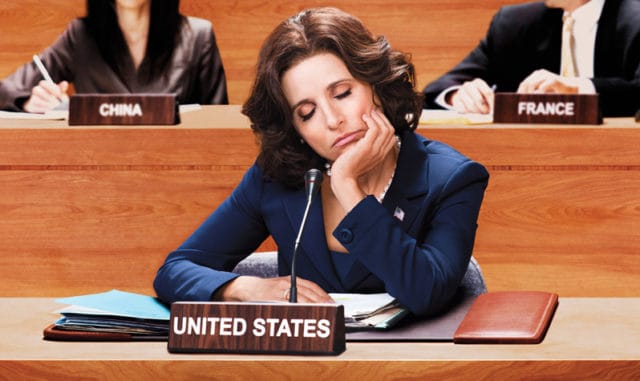 Veep is short for Vice President. As a result, it should come as no surprise to learn that it is the name of an American political satire starring Julia Louis-Dreyfus as Selina Meyer, a fictional Vice President and then President of the United States. Since it started running in 2012, Veep has received numerous awards and accolades, so it is natural for curious individuals to wonder whether it has had an impact on real life or not.

So far, the single best piece of evidence that Veep has impacted real life politics is Malcolm Turnbull’s “continuity and change” slogan, which sounded a lot like Meyer’s “continuity with change.” For those who are unfamiliar with the name, Turnball is the current Prime Minister of Australia, who rose to his position upon dislodging the previous prime minister, Tony Abbott, from the leadership of the Liberal Party through a leadership challenge. As a result, when Australia held its federal election in 2016, Turnbull sought to distance his administration from his predecessor’s administration without alienating their shared supporters at the same time, thus resulting in “continuity and change” in a blatant attempt to accomplish two aims with a single slogan.

Unsurprisingly, the cast and crew of Veep were less than impressed. After all, they had intended the “continuity with change” slogan to be as meaningless as possible, having been created for a character who wanted to seem fresh and forward-looking while also seeking to assure the American public that everything was just fine after the president had just stepped down from his office. It was a matter of coincidence that the Turnbull campaign came up with much the same slogan by following much the same train of thought, though one had to wonder when one of Turnbull’s tweets sounded a lot like something that the protagonist of House of Cards, President Frank Underwood would say. Summed up, Veep was not responsible for creating this incident, but it did manage to predict it in spite of the fact that it is supposed to be a political satire of all things, which speaks volumes about the state of politics.

On a semi-related note, Turnbull managed to win in spite of his “continuity and change” slogan, which is why he is the current Prime Minister of Australia. However, it is interesting to note that the 2016 federal election must have been a nail-biter, seeing as how the Liberty Party managed to hang onto majority government status by no more than a single seat, which is a razor-thin margin by any standard of measurement. In fact, it was literally the closest federal election of its kind since the 1961 federal election in said country.

How Is Veep Coping with Recent Politics?

With that said, it is hilarious to note that the cast and crew of Veep have been having something of a crisis on their hands ever since President Donald Trump managed to win the last U.S. presidential election. In spite of the fact that Veep goes to great lengths to make its political satire as true to life as possible, its cast and crew failed to see recent political events coming, with the result that they are caught flat-footed in regards to how they are going to top what has been happening in real life. On the plus side, they have said that this will force them to be even more clever. Furthermore, it is important to note that Veep has no plans to introduce a character based on Trump for the simple reason that it is set in its own fictional universe that hasn’t mentioned a real life president more recent than Jimmy Carter, which could be part of the reason that it has so much bipartisan appeal.