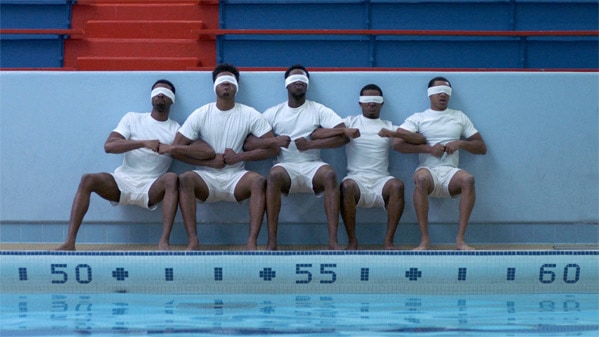 Netflix has debuted the official trailer for a film titled Burning Sands, which initially premiered at the Sundance Film Festival in January this year. Directed by newcomer Gerard McMurray, making his feature debut, the film is about a fraternity pledge named Zurich played by Trevor Jackson.  The film explores an inner debate going on in Zurich’s head.  Does he keep his code of silence and honor the brotherhood or does he go public with all of the intense violence of his underground hazing experience?

Personally I think this is an excellent potential plot.  The question will be how realistic will McMurray go with hazing?   How close to home is this going to hit for the legions of fraternity and sorority members around the country?  Based on watching the trailer alone, I’m in.  Having been in a fraternity myself, the rigors of pledging have never really been explored to the depths that they could or should.  I don’t regret anything I went through but it’d be nice to see something accurately reflect it on film.

Burning Sands will be released on Netflix March 10th.

Here’s a full description of the movie

In his freshman year of college, it seems Zurich has everything going for him; he has the respect of his teachers and university administration, the love and devotion of a wonderful girlfriend, and he’s been selected for admission to a prestigious black fraternity on campus. But as Zurich embarks on the Hell Week of pledging his fraternity, the harsh trials of entry into brotherhood begin to test the limits of his self-worth. As the intensifying abuse begins to become untenable, Zurich struggles to honor the fraternity’s code of silence, and the scaffolding of his life outside the frat begins to dismantle.