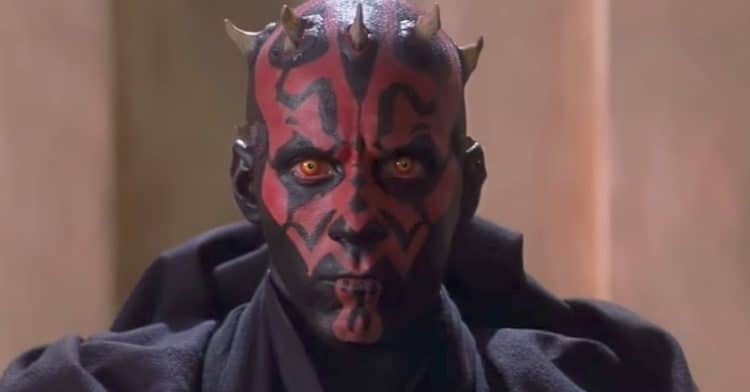 For quite some time it’s been difficult to look upon Darth Maul as a tragic figure, but Hatred makes it much simpler since he was in fact someone that a person couldn’t help but pity in a way since the only thing he knew was pain and the lust for power throughout much of his life. Maul was taken by Darth Sidious as an apprentice and tortured even as he was taught the ways of the Force and the dark side, and pain became his only constant companion as his body was scarred with tattoos and his soul was eventually broken and pieced back together in order to create an engine of death that would bring ruin to the Jedi and fear to those that Palpatine sought to subjugate. But for all that he was little more than a tool, an instrument of Palpatine’s desire to rule a galaxy from atop his throne as he ground his heel upon the necks of those he felt were beneath him. Had Maul and Kenobi never met it feels likely that Maul would have been allowed to run unchecked throughout the galaxy, perhaps even remaining Palpatine’s apprentice until his power grew great enough to attempt to usurp his master’s place. Maybe, but it doesn’t feel likely.

Where Maul is a bundle of rage and pain, Palpatine is little more than ambition and a dark, abiding sense of purpose that managed to allow him to remain undetected for so long. Thinking on it this way, that Palpatine was able to keep himself hidden from an entire order, is enough to think that Maul might have been a poor substitute for his master since his desire to cut down anyone in his path is more the act of a prideful individual that’s in need of validation that he is in fact the strongest Force-user in the galaxy. The fact is that Maul is one of the most skilled and powerful Sith lords to ever come along, but the fact that he was taken out by a padawan is what really came to torture him the most. He was at his prime and Obi-Wan Kenobi took him out with one deft slice of his lightsaber, and Maul’s ego couldn’t handle that any better than his body could as he went mad not long after that, surviving on pure hatred as his drive towards killing Kenobi was all he held onto and his hatred was the only thing that kept him alive for quite a while. Once he began to encounter Kenobi again he couldn’t help but become a rage monster with less focus and more emotion-fueled anger that was bound to make mistakes now and again. As for Kenobi, he was quite often the face of calm and stoicism, though he almost came close to showing rage in various moments since Maul made it his mission to needle Kenobi relentlessly at times.

Everything leading up to the final battle between Maul and Kenobi might have been seen as filler by a lot of people, but every moment that was spent bringing him back was one that was leading up to the final confrontation in Rebels, and each move was masterful in its own right since Maul is the type of character that people revere and want to see in all his glory, as much as they can. The fight between Maul and Palpatine was insane, especially when it came down to seeing Maul begging for mercy. But this is another part of how he became such a tragic character, he’s simply no match for his old master. The Emperor had no use for Maul after he was defeated, and made it very clear that he was no longer his apprentice. The utter callousness of Palpatine is another reason why it’s easy to see Maul as kind of a tragedy in the making, as he was never really considered to be Palpatine’s equal, but was more akin to a weapon to be aimed at his enemies and little more. In fact the only thing that made Maul real was the enmity he had for Kenobi. Up until his fall he was a powerful Sith, but he was still empty in a way, not a complete being yet in the Star Wars franchise. Some people might want to argue, as there are Darth Maul stories that lead into the first movie and show him to be quite skilled and in possession of a life before The Phantom Menace occurred.

Out of the many upon many characters in the Star Wars franchise, Maul is likely one of the easiest to pit for the simple reason that he had no choice in who he would become. And by the time he did have that choice, it was too late for him to turn back.