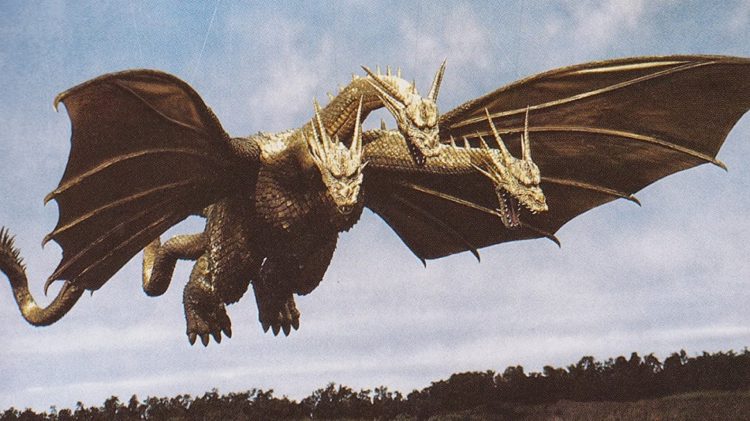 King Ghidorah is one of the most famous monsters from the Godzilla franchise. In recent times, his name has been seeing a fair amount of mention in English publications, seeing as how he is expected to be featured in the upcoming Godzilla: King of the Monsters. Here are 10 things that you may or may not have known about King Ghidorah:

2. Inspired By the Lernaean Hydra

Unsurprisingly, the people behind King Ghidorah took inspiration from a number of monsters. One excellent example would be the Lernaean Hydra, which was a multi-headed serpent that could grow two heads for each one that was cut off. Even worse, the Lernaean Hydra was very poisonous, so much so that mere contact with the poison could befoul entire rivers.

Another excellent example would be the Zmey Gorynych, which was one of the most memorable sights from the Soviet fantasy movie called Ilya Muromets that had managed to make it into Japanese movie theaters in 1959. For those who are curious, Ilya Muromets is a Russian folk hero who is believed to have been based upon an Orthodox saint named Venerable Ilya Pechersky. Meanwhile, zmey is just the Russian term for a dragon, with Zmey Gorynych being a multi-headed dragon that could breathe out fire.

4. Inspired By the Yamata no Orochi

With that said, it seems safe to say that King Ghidorah took the most inspiration from Japan’s own multi-headed serpent monster called the Yamata no Orochi. In short, the Yamata no Orochi was a eight-headed, man-eating monster killed by the Japanese storm god Susano-o, who recovered the Kusanagi no Tsurugi from one of its eight tails. There are some people who have compared the importance of the Kusanagi no Tsurugi in Japanese culture to the importance of Excalibur in British culture, not least because said sword is one of the three pieces that make up Japan’s Imperial Regalia.

5. Its Name Is Based On Its Sources of Inspiration

The influence of these monsters can be seen in King Ghidorah’s name. First, some people suspect that the “King” in King Ghidorah might have been inspired by King Dragon, which was the name of the Zmy Gorynych in the Japanese version of Ilya Muromets. Second, the “Ghidorah” in King Ghidorah is thought to have been influenced by the pronunciation of “Hydra” in Russia. For that matter, it should be mentioned that “Hydra” is rendered using syllables that read “Hidora” in Japanese, meaning that the influence isn’t exactly subtle.

6. Has Taken On Various Roles

Like the other iconic monsters of the Godzilla franchise, King Ghidorah has taken on various roles in various movies. For instance, when it was introduced in Ghidorah, the Three-Headed Monster, it was an extraterrestrial monster that had wiped out Venusian civilization and was threatening to wipe out human civilization. In contrast, there was one movie in which Ghidorah was one of the three monsters that protected ancient Japan, with the result that he teamed up with two other monsters to fight Godzilla.

7. Tends to Be Malevolent

With that said, King Ghidorah is pretty consistent in that it tends to be a malevolent force. There was one movie in which it had benevolent intentions, which was the one in which it teamed up with Baragon and Mothra to fight Godzilla. Otherwise, King Ghidorah is a monster, though the exact motivations of the monster can see some variation. Sometimes, it seems to be seeking out food. Other times, well, suffice to say that some versions of Ghidorahs destroy for the pleasure of destroying, which is rather terrifying considering that it is a huge, nigh-indestructible monster that is often hyped up as being a civilization wiper or worse.

8. Tends to Be Gold-Colored

The initial version of King Ghidorah was painted green so that it would be easier for the viewers to distinguish it from Godzilla, Mothra, and Rodan. However, the special effects director Eiji Tsuburaya insisted that King Ghidorah should be painted gold because he had come from the gold planet Venus. This can sound rather strange, but it should be mentioned that the ancient Chinese believed in elemental associations for the visible planets. Due to this, Mercury was called the Water Planet; Venus was called the Metal Planet; Mars was called the Fire Planet; Jupiter was called the Wood Planet; and Saturn was called the Earth Planet. The character used to indicate “Metal” can mean “Gold” in particular, thus explaining why Venus is associated with gold in not just modern China but also a number of other modern countries that have been influenced to a considerable extent by Chinese culture.

Moving on, King Ghidorah has had a number of origins, which should come as no surprise considering the nature of the Godzilla franchise. The initial version was just an extraterrestrial monster. However, other versions have been created by aliens, created by future humans, and even an extra-dimensional monster that was worshiped by mad alien cultists.

10. Can Possess a Wide Range of Powers