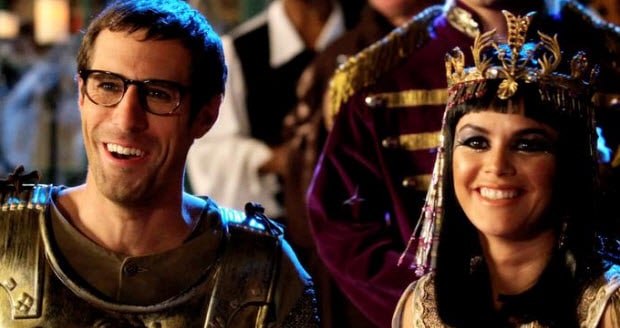 It’s not hard to pinpoint why this episode was the first of this season that I have truly loved.  It’s Halloween in Bluebell, and as Peter (Robert Buckley) said, “for a sleepy little town Bluebell’s got a lot going on”.  He was reacting to hearing about Lemon’s past relationships and affairs, but it is relevant to this particular episode as a whole.

Dash DeWitt was the townie only briefly showcased this week.  He was starring in a one-man Frankenstein play in the Rammer Jammer.  I wish we got to see more of this, as it reminded me of Kirk from Gilmore Girls’ performances that were always so funny.  Hopefully Dash’s play is a special feature on the DVD!

Annabeth is expecting a proposal on her one-year anniversary with Lavon because he had been dropping hints that it’ll be a night she will always remember.  She’s nervous at first for normal reasons, but a find during a routine check-up by Zoe has her even more frazzled.  There’s a chance that a cyst on her ovary could lead to infertility, but nothing will be definite until the test results are back the next day.  Poor AB has always wanted to have babies, and now she knows she wants to have them with Lavon.  Luckily for her, this health scare turns out to be just that: a scare.  As for Lavon’s surprise for their anniversary, he had rented an original film reel of “The Night of the Living Dead” because Annabeth had once said she never saw it.  I hope this episode served as foreshadowing to an actual proposal this season, and many babies in the future for the couple.

Lemon had a prominent storyline again this week.  After quitting the Belles last week, she is desperate to get an invitation to the Junior League Masquerade Ball.  The only way she can score an invite is if she goes with an eligible member of the high society, so she calls her grandmother for a favor.  Her grandmother sets her up with a well-to-do bachelor, who turns out to be quite a dud.  When she complained to her grandmother at the ball that he’s frankly a tool, her grandmother harshly replies, “that may be the only tool left in the box”.  Ouch!

Robert Buckley’s character Peter was quite literally just passing through town on the way to an airport when he got a flat tire.  He’s stuck in town for the night, and got hooked up with an invitation to the masquerade ball.  Lemon hit off instantly with him at the bar, as he was helping her mess with her date.  The chemistry between Lemon and Peter was palpable.  It was a letdown to hear that he doesn’t stick around in one place for long, especially with his job as a news producer covering issues worldwide.

Given Jamie King’s real life pregnancy, this Lemon-heavy beginning of the season will naturally mean she will be missing for a few episodes down the line.  I think Peter is the perfect excuse to write Lemon off as going overseas to visit him for a little while.  I’m just crossing my fingers that Peter ends up coming back to Bluebell to be with her.

Joel and Zoe had been bickering back and forth for most of the episode about his friendship with Wade.  She doesn’t understand why he would want to be friends with him, and he oddly doesn’t care that Wade is an ex-boyfriend of hers.  Last week, Zoe attempted to get Joel and Lavon better acquainted but they seemed to have a mutual dislike for each other.  All that changed when they ended up bonding over Game of Thrones when Zoe and Joel crashed Lavon’s anniversary dinner for Annabeth’s sake.

Meanwhile, Wade has been sleeping with married and unavailable women.  One of his conquests even has an intimidating boyfriend after Wade for revenge, but it isn’t until George talks some sense into Wade that he realizes what he’s subconsciously doing.  He’s sleeping with all these unavailable women because the one woman he still harbors feelings for is Zoe.  Her new boyfriend Joel is apparently here to stay, so this blooming friendship between Wade and him will be interesting to see played out.

It’s possible that this episode was so enjoyable because it played to most of the characters’ strengths.  Lemon’s conversation with Peter revealed that she isn’t the snob at heart that her social standing used to imply.  Her confession that she still doesn’t know what she wants to be when she grows up was sweet and indicative of the new and improved Lemon.  Wade’s revelation about his actions regarding his feelings for Zoe will have him conflicted as he starts to genuinely like Joel.  This will only make the inevitable Joel and Zoe break-up that much more complicated.  I know I for one am even starting to like Joel now, as much as I tried not to.

So what did you think?  Did you love this episode as much as I did?