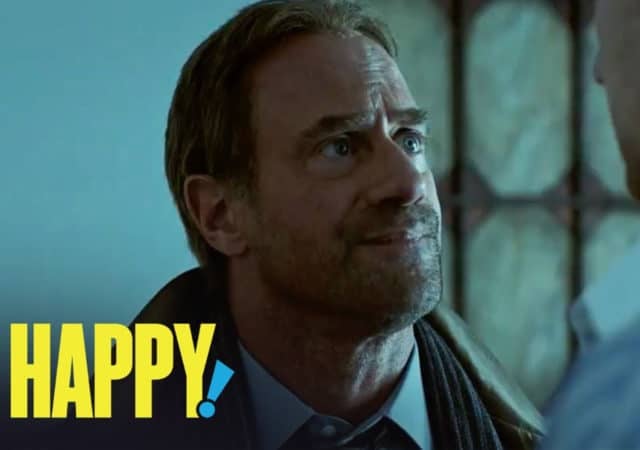 The past was the big theme of last nights episode of Happy!, and though flashbacks and origins are often tired and cliche, “When Christmas Was Christmas” managed to make something powerful out of them. The characters and plot all start to fall in line in this episode, Happy and Nick are on the path to finding Hailey, we learn more about what makes Nick who he is, and we learn the demented story behind the Very Bad Santa.

One of the strong points of the episode is, as usual, the interaction between Happy and Nick. Nick is on board for doing the right thing and rescuing his daughter, but he’s still kind of a crude a**hole about it. But, this behavior is contrasted by the ever-optimistic Happy, who’s personality and intelligence are similar to that of a child’s. This makes sense too, since he was created by the mind of a child, thus his naivety and constant excitement are what push the premise of the series to be enjoyable and hilarious.

Another strong point of the episode were the flashbacks. Again, flashbacks that reveal how a character got the way they are can be a little tiresome, especially in TV, but Happy! approached it its own unique, and somewhat insane, way. Each flashback is introduced with a black and white title card akin to those seen in It’s A Wonderful Life. Ironic, since everything that happens in the past is not in the least way wonderful.

These flashbacks tell the tale of Nick and Meredith’s partnership, both as detectives and in their affair, and how the dark, messed up life of a cops drive a wedge between Nick and his then-wife, Amanda. The flashbacks are a bit one-note, Nick sees dark things on the force and can’t talk about them to his wife, which causes them to drift as he starts an affair with Meredith, but they do their job well.

These snippets of the past are timed up with moments in the present and don’t take up too much of the episode’s runtime, which is perhaps their greatest achievement. They tell the story of the past in a quick and easy manner, leaving room for the interesting interactions and moments of the episode. 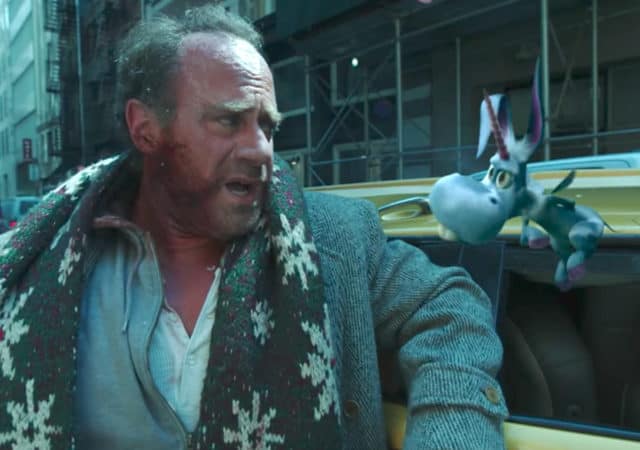 In main plot of the episode, Nick slips back into his old detective persona, running the investigation to find Hailey like an old pro. He uses a sketch artist to get a picture of how Happy remembers the “monster” that took Hailey then finds himself in a Santa-friendly strip club known as the North Pole, both scenes bringing out some of Meloni’s funniest moments, like when he did a celebratory dance for his first drink in 19 hours.

Meanwhile, Meredith is helping Amanda look for Hailey, or rather, they’re looking into the other missing children, hoping to find some leads as to who is taking them and sending deranged Christmas cards to their parents. The interactions between Amanda and Meredith make for some great character moments, and they finally make Meredith an interesting member of the cast, especially when we learn that she is using Amanda to get to Nick and the password.

There is, however, a strange moment that results from their investigation. Amanda is acting as a middleman between the cold Meredith and the parents who they are questioning, relating to them as a mother so that they can get information without upsetting them. The interaction between Amanda and the parents seem genuine, but it turns out they kidnapped their own daughter and had been keeping her in the attic.

Now, I saw the purpose in this scene for Amanda’s character, it gives her a taste of the things that Nick experienced on the job, the first taste she got since he never talked about work, but otherwise it felt a bit off. The parents were a lead that went nowhere and the show glosses over why they kidnapped their daughter. It’s a good character development moment for Amanda, but not for anyone else, and the whole scene feels out of place.

But, this isn’t the only strange, and somewhat questionable moment in “When Christmas Was Christmas.” The episode switches between Nick and Happy, Meredith and Amanda, and Hailey and her captor, the Very Bad Santa. Now, the latter moments are genuinely scary, Hailey is pulled out of her box and is brought to a “Christmas feast,” where the Very Bad Santa has offered her some fruit cake, “because she’s nice.” Hailey refuses to eat it, upsetting Santa.

Santa then reveals that he was the little girl she was talking to through her box. And, for some reason this convinces Hailey to eat the fruit cake. It’s not entirely clear why this works, or if it’s a fear that pushes her to do what the Santa wants, but it’s still a weird moment. Despite this, the scene is genuinely frightening, as is the follow up where we learn that the cake was drugged and Santa has “big plans” for Hailey. 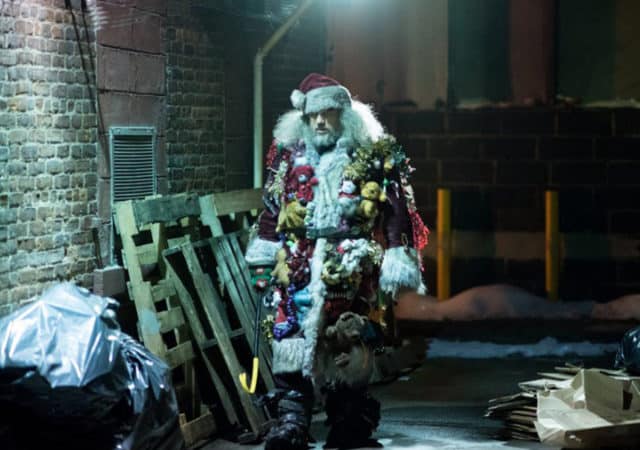 In this moment we see that the Very Bad Santa treats a Christmas mitten like an imaginary friend, something that comes into play at the end of the episode. There are plenty of other fantastic character moments for the villain, and Joe Reitman’s performance is truly haunting, he does so much in such a small amount of time, showing the broken man behind a creepy beast of a kidnapper. We also learn about what might have created this Very Bad Santa, that he might be the son of a mall Santa that hung himself in response to the jealousy of others.

“When Christmas Was Christmas” comes to a climax when Very Bad Santa confronts Nick for the first time, sneaking up on him as he exits the North Pole club. Santa beats Nick with a crowbar and continues to pummel him mercilessly, coming at him like an unstoppable force. The camera work and choreography is key in this scene, as it sets Santa up to be imposing and as physically powerful as he psychologically broken.

Santa leaves Nick a beaten mess, something that seems to be a recurring theme in Happy!, and Happy comes to help. The episode ends with Santa revealing, in a hauntingly delightful/blissful manner, that he can see Happy, leaving us with a frightening cliffhanger.

The episode had a few bumps, but the questionable moments merely elicited a brief feeling of, “wait, what?” before things started moving quickly again. The strongest aspect of the episode was how truly scary everything felt. If there’s one thing that “When Christmas Was Christmas” is trying to tell us, it’s that its not “a wonderful life,” it’s a scary, horrifying one, and it’s a difficult task to try and make things better.

Next week’s episode of Happy! comes after Christmas, so stay tuned. Until then, Happy! holidays and thanks for reading!

Things escalate and the past is revealed in this week’s episode of Happy!