Home
Movies
Guy Builds an Entire AT-AT in his Backyard 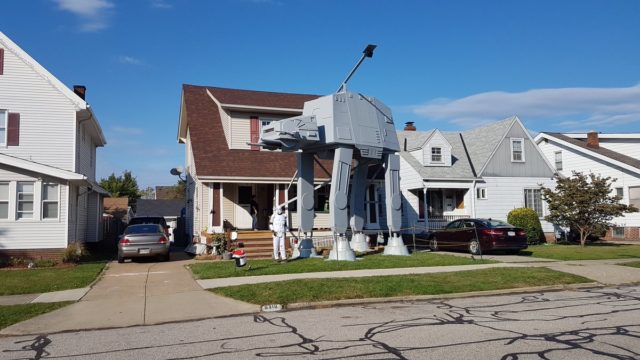 So I’m not going to go off like a badly-wrapped Roman candle like a few of the bloggers that have covered this story so far. Instead I’m going to give mad props to this guy in Parma, Ohio for this replicated AT-AT that looks every bit as awesome as anything you’d see in the movies, well, y’know, not really, but still….

It’s an awesome display just because of what it is and what he built out of, which is mostly wood, barrels, and foam. Just imagine the ingenuity that it took to build each piece and then finally assemble it and hope for the best. This is by and large the best Halloween decoration that this guy could have come up with, and according to sources he’s actually been doing this kind of thing, not the Star Wars them obviously, every Halloween. He loves to go all out and over the top for this holiday and never pulls any punches with his decorations, as you can obviously tell from this picture.

Just playing devil’s advocate for a moment though I kind of wonder if this breaks any kind of zoning law in his neighborhood or if it’s suspect at all with the authorities as a hazard of any sort. I mean the thing is two stories tall and must be ridiculously heavy despite the fact that it’s obviously not made of metal. Just looking at it I have to wonder if the city of Parma would think that this is okay, hopefully, or if he would have to take it down sooner than he’d like. That would be a bummer really since the construct is just too awesome for words.

Now about these other articles….

Granted it’s probably a lot of playful sarcasm and nothing too serious, but the idea of laying into this guy for the attempt he’s made at decorating his front lawn and basically negating the need for any other Halloween decorations is kind of ridiculous. Like I said, I’m hoping these other articles that lambaste the poor guy are just poking fun and being sarcastic, but to anyone that would have an issue with this it’s safe to tell them to grow up and look to their own interests and let this guy have his triumph. A lot of folks can look at this and be completely awestruck with the faithful design and the attention to detail that he’s been careful to take.

As a diehard Star Wars fan I happen to think this is one of the most awesome things I’ve ever seen, and like many people I’ve seen a lot through the years. This guy must have had a lift or a crane to put all this together since no ladder could possibly be that safe when trying to assemble it. The time, the effort, and the accomplishment are all spectacular and pay homage to a part of Star Wars that was absolutely terrifying the first time it was seen on screen and was no less so when it was seen in Rogue One.