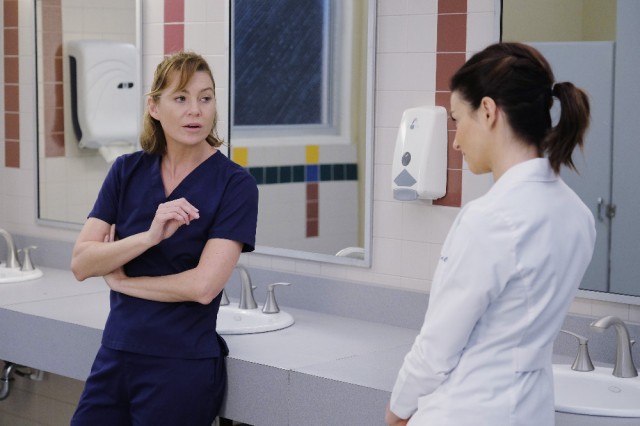 The 250th episode of Grey’s Anatomy opened a Pandora’s box of emotion which unfolds this week. A few rifts are healed, while a chance encounter leaves the door open for a new one.

It’s Penny’s first day at Grey Sloan, and unfortunately she’s on Meredith’s service. Meredith spends the day trying to be professional, requiring Penny to be meticulous. As much as Penny is trying to keep up, it’s clear she has no friends here. Amelia is furious that Penny is even in the hospital and gets nothing but stoicism from her sister-in-law. That is, until Meredith cracks under the strain of trying to be mature and calls out Penny as incompetent. She tries talk to Derek in the chapel and Alex as well (who was noticeably absent for the majority of the episode). Eventually Meredith does gain the strength to teach Penny. Callie’s inner turmoil keeps her from Penny for most of the hour but in the end she chooses to stand by her side.

Webber is also dealing with some awkwardness when some old friends come into the ER and he doesn’t know how to explain that Maggie is his daughter. On top of the dilemma of trying to explain how Maggie is the product of an affair, there is also the fact that Maggie and Webber haven’t discussed what they mean to each other. Given that he just revealed he knew exactly who Penny was to Meredith when he recommended her for her job, he’s really not batting a thousand in the father department. He does finally works up the courage to tell his friend. He and Maggie also make some strides in their father/daughter relationship as well.

April is still trying to find an opening with Jackson to save their marriage. If she thought that tricking him was the way to do it, she really has lost her mind. April brings a patient with tumors on his hands over from Jordan, but lies to Jackson about the extent of the growth so that Jackson wouldn’t say no. Jackson sums up both the case and their marriage with “There’s nothing here to save”. Even Arizona thinks that April is grasping at straws. After some thought, Jackson agrees to at least try and with Callie’s help he’s able to get this child the hands he needs. It’s a miracle, and the diehard Jackson and April fans get another one when these two have a warm moment after months of freeze-outs.

Everyone may seem like they’ve let go of some of their resentment, but at least one person has found cause for a new one. Dr. Grayson, the man who saved April’s patient,  and Hunt seem to have a history, and a very bad one considering Hunt tells him to leave. Judging by next week’s promo, that’s not happening.

Was the aftermath of the 250th episode everything we hoped it would be?