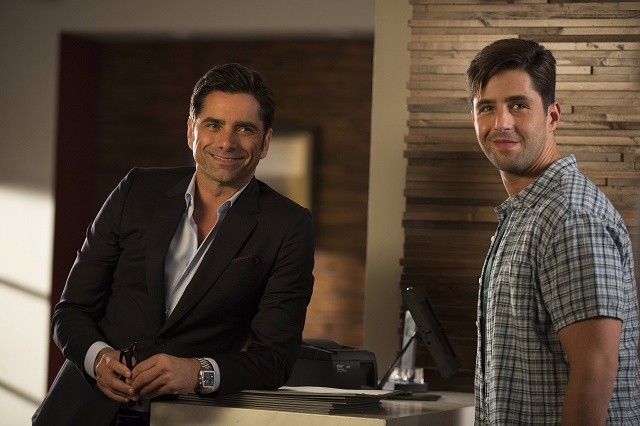 After some initial growing pains in its early episodes, Grandfathered has settled into a nice groove over the past couple of weeks. Is the series “TV’s next great comedy”? No, but with a superb cast, a couple of laugh-worthy gags, and some genuinely heartwarming moments, it’s easily become the best new sitcom of the fall season.

When you look closely at it, the main story in “Jimmy & Son” really shouldn’t work. Gerald’s attempts to mold Edie into his image are barely hinted at throughout the episode, unlike the more obvious scenes involving him and Jimmy, and the realization that Gerald has while looking around at Edie’s room near the end of the half hour feels a little tacked on. However, even if if the moment is a tad underdeveloped, it still works because of the time and effort that Grandfathered has put into solidifying Jimmy and Gerald’s connection over the past couple of weeks; you truly believe that Jimmy has come to love his son, and it’s heartwarming when Gerald realizes it, too.

While Grandfathered‘s first couple episodes couldn’t figure out what it wanted Jimmy and Gerald’s relationship to be like, with the two of them bickering almost every week about something new, the show’s past few installments have done a terrific job at showcasing Jimmy’s affection and care for his son, feelings that he expresses in his own, uniquely Jimmy way. From taking Gerald out to meet girls to cooking up Mexican food to make up for ruining Thanksgiving, Jimmy is continually trying to make his son happy, even if he’s not exactly sure how to do that just yet, and it makes for a much more entertaining and endearing show than what Grandfathered originally was in its opening installments, with Jimmy constantly searching for a way to escape the responsibility and commitment of family life.

And Grandfathered hasn’t only improved in the stories that it’s been telling, but also in the ways that the series is using its incredibly likable cast. The creative team is doing a much better job of writing to each cast members comedic strengths, whether it’s John Stamos’ charming delivery of one-liners, or Josh Peck’s terrific ability to switch from awkward and neurotic to suave and confident within the same scene. And then there’s Paget Brewster, who is such a comic powerhouse that she elevates the hell out of Sara’s nude photo storyline, turning it into one of the funniest subplots that Grandfathered has done yet in its nine-episode run.

There’s still some tweaking that needs to be done with the supporting characters, particularly Vanessa and Ravi, who, simply put, just need more interesting things to do (Annalise could always have more to do, too, but Kelly Jenrette does a fine job with whatever material she’s given). However, the four-week stretch that Grandfathered has put together, beginning with “My Amal” and culminating with “Jimmy & Son,” has been impressive, and the growth shown by the freshman comedy in that short space of time has me very excited to see what the series can do when it returns in 2016.