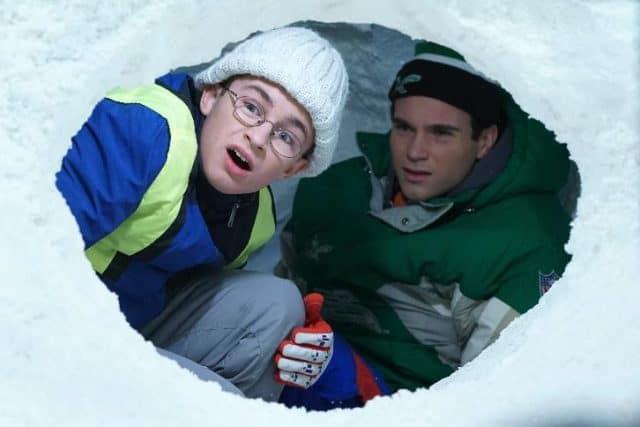 One of the greatest days of the year for any kid, whether you’re from 1980-something or from 2000-something, is a snow day. Getting to spend time away from school because of a white blanket covering your world was always incredibly exciting, and it’s about time that we see how the Goldberg family reacts to such an occasion. Let’s take a look at this week’s new episode of The Goldbergs, “Snow Day.”

As it turns out, Adam, Barry, and Erica’s school is the one that just never closes no matter how much snow there is, but that doesn’t stop them from getting their hopes up each and every time. One day, however, the snow gods come through for them, giving the family the precious gift of a snow day. Even on a snow day, though, things don’t go exactly as the kids would want.

In Erica’s case, Beverly is determined to force her into writing her final college essay instead of just sleeping the day away. Surprisingly, Erica has already written the essay about one of her heroes, but, to Beverly’s dismay, it wasn’t about Erica’s loving smother. Or, at least, that’s what Erica wanted her to think. It turns out that Erica actually did write the essay about her mother, but she didn’t want that fact to go to Beverly’s head (as it ended up doing anyway). Erica decides to get back at her mother by writing a new essay about how big of an obstacle her mother has been in her life, but, in the end, Erica is able to openly acknowledge that her mother is her hero, concluding the story in a great emotional moment for the two.

For Adam and Barry, their father’s terrible fear of snow threatens to ruin their fun for the day. In spite of this, the boys build a snow fort (against Murray’s wishes, of course), but the situation ends with their father getting stuck in the snow while they take advantage of his misery. Afterward, they realize that they can really do whatever they want in the snow because their father will be far too afraid to go out and punish them. Of course, surprise, this rebellion backfires and makes the boys realize that they need their father much, much more than they thought. In the end, Murray manages to be a hero for his sons in ways that they didn’t expect to need.

“Snow Day” covered a lot of ground that The Goldbergs has gone across plenty of times throughout its history, but that doesn’t diminish the impact that the stories in the episode had. Every family is going to experience these moments multiple times during a lifetime, and seeing them play out on the small screen is just an example of that.

What did you think of this week’s episode of The Goldbergs? Do you have any fun snow day stories of your own? Let us know your thoughts in the comments down below!

While it covers similar ground as before, “Snow Day” is a great example of how The Goldbergs shows the life of a very real family.