Home
Television
Go On
Go On Episode 2 Review – “He Got Game, She Got Cats” 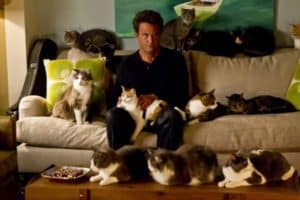 When I saw the Go On premiere last month during the Olympics, I pretty much loved it. The show had a great leading man in Matthew Perry and a great bunch of misfits around him. It had heart and laughs, and Go On wasn’t too broad in its humor or too sappy in its emotional moments. I really, really enjoyed it, which is why it saddens me that last night’s second episode, “He Got Game, She Got Cats,” was such a dip in quality. Most TV show’s second episodes are never truly great, but what I saw from Go On last night has me a little worried about its longevity as a funny, heartfelt sitcom.

Even though I do not have much concern about the way Go On handles its emotional moments, the show did raise some red flags for me last night come on the comedy side of things. The premiere episode of Go On certainly had its goofy moments, like when the therapy group competed in “March Sadness” or when they ran down the street together in costumes that they had stolen from the LARPers (Live Action Role Players for those who haven’t seen Role Models). However, this week’s episode gave us comedy at its broadest, with Perry’s Ryan King (which, off topic side note, is actually my brother’s name) fast talking and yelling out sports chants for half the episode, and his fellow group member, Sonia, adopting dozens of cats to fill the hole left by breaking up with her boyfriend. It was if Go On had suddenly morphed into an Adam Sandler comedy.

I will admit though that Go On did have me laughing hard twice, with its line about jazz being “too sexual” and Ryan’s assistant Carrie’s one liner about him looking like Rob Lowe from St. Elmo’s Fire. Aside from those two moments, however, Go On was either trying too hard with quick pop culture references (perhaps attempting to be like its fellow NBC comedy, Community, but with much poorer execution) or was too lazy, using dumb comedic stereotypes (lonely women must go find themselves a cat).

The more emotional parts of the episode were handled better, in my opinion. While Ryan’s desire to not be alone did veer into the extreme with his constant pestering of Carrie, his line near the end of the episode (“I want to know that someone is thinking about me when I’m not around.”) definitely struck a chord with me. I also loved Ryan’s storyline with George, the blind, elderly man from the group. The fact that Ryan was willing to get floor seats for a man he barely knows, a man who wouldn’t even be able to physically see the game, speaks volumes about who the character of Ryan King truly is. I also really liked how the episode ended with the screen slowly fading to black and both Ryan and George simply listening to the sounds of the basketball game. For me, that was the episode’s best moment.

Even though I wasn’t the biggest fan of Go On‘s second episode, I will definitely keep watching for at least a little bit longer. This show definitely has the potential to be at times hilarious, while at others, heartbreaking. If it can keep the balance between the good comedy that it had in its pilot episode and the more emotional moments that it does quite well, I think this could potentially be a solid sitcom for NBC to add to their aging lineup. However, if Go On continues to try to go for the lazier, louder, and broader type of humor it showed last night, I’m not too sure if I’ll keep joining Ryan and co. for too many more group therapy sessions.