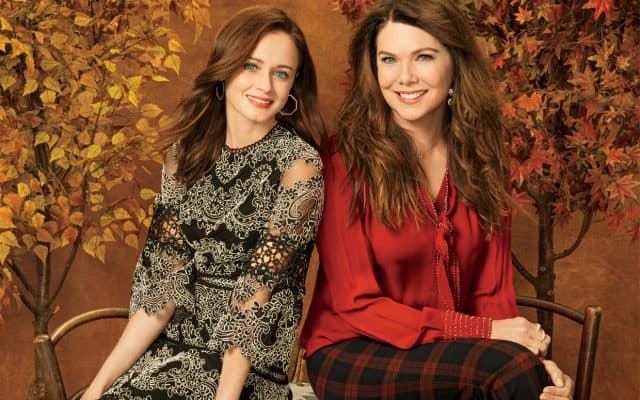 Word of Warning Right Now: If you are about to read this article without having spent 6 straight hours on your couch watching Gilmore Girls: A Year in the Life, shut the technology down immediately. You do not want to be spoiled! I repeat, you do not want anyone to spoil any moment of the emotional Netflix revival of our classic Gilmore Girls. Let’s put it this way. There are some Christmases you plan for and while you get everything you want, it’s predictable. Then there is that one Christmas where you ask for what you know you like, and every single dream you’ve ever had but never dared say aloud comes true. Originally this writer did not think she could be trusted to be coherent enough after this overnight marathon to write about its magnificence. However, there is so much perfection to comment on we just had to discuss the greatest moments of the revival  series. Turn around if you haven’t seen Gilmore Girls: A Year in the Life in its entirety, because we’re about to summarize the best moments of the night without too many spoilers. Not to worry, we won’t spoil those last four words. Instead we have an acronym of our own in response: O-M-G.

We begin with the lay of the land. Picking up nine years after the original WB/CW series ended, we find that mostly everything is…the same. Luke and Lorelai are still together. Stars Hollow ceases to alter from the quirky institution we all love. Rory has had success in her career, but there are cracks there which slowly begin to break loose. The first, most shocking moment came early into “Winter” when Rory fans finally saw which of her lucky former suitors had won her heart. The answer was…Team Logan, sort of. Rory and Logan are together again, but instead are now having an affair. It’s safe to say that even if you were a Team Logan fan, that particular part of this reconnection felt a tad uncomfortable. Yet we forced ourselves to get over it because it was obvious these two never got over each other. A pretty valid point to recognize is that each of Rory’s boyfriends was the guy that she needed at a particular moment in her life. Logan helped Rory become the woman she is, and Rory helped Logan grow up (sort of). That was the stage set in “Winter” relationship-wise.

From beginning to end the late Edward Herrmann’s presence reigned over the entire show. Literally, his 10-foot tall portrait seemed to follow his girls around the room. There is a special kind of heartache that happens when a family loses its patriarch. The Gilmore Girls spent the year figuring out how to live without their one Gilmore Gentleman. We expected Emily to come a bit unhinged going through the grief of losing her husband of 50 years. Emily went through the stages of grief with grace and honesty, eventually reaching a place in “Fall” where she will live the rest of her life on her terms, and with a whole new family to care for. The painful ways in which Richard’s death affected Lorelai and Rory over the long-term were shocking. Suddenly Lorelai’s stable life was turned on its head, making her question if she shouldn’t be making any large changes in her life. From beyond the grave Richard meddled in his daughter’s life through her relationship with Luke. Instead of being resentful towards her father, Lorelai worked herself (through a very painful process) past the anger towards feeling the grief. As for Rory, though Lorelai has always been Rory’s compass in life, Richard was her north star. Rory’s life becomes an unmitigated mess as a result of losing her grandfather.

Herrmann and Richard may not have been able to be physically present for the revival, but his spirit was heavily felt. Literally everyone else made it back for the homecoming. All of Rory’s boyfriends, and a few of Lorelai’s boyfriends (Hi Jason! Richard hated you when he died); Paris and Doyle, Lane, Zach, their kids and their band; April, Michel, Mrs. Kim, Headmaster Charleston, Jackson and Sookie (we missed you Melissa McCarthy); the Life and Death Brigade and all of Stars Hollow, including Kirk. We even got a glimpse of the elusive Mr. Kim, and of all people, Tristan! Almost everyone returned in some sort of fanfare, like Sookie did in a sea of a dozen cakes. It was glorious. Then there were the cameos. Did you spot all of the Parenthood alum supporting their beloved Lauren Graham? What about Paul Anka (the person and the dog), Alex Kingston, Julie Berman, Sutton Foster, and the incomparable Carole King herself? That’s quite a soiree, all gathered together with the town troubadour singing in the background.

“Spring” and “Summer”was where the most emotionally painful moments were. Both Rory and Lorelai spiral downward in their professional and personal lives. The predictability of Lorelai’s life puts a huge strain on her relationship with Luke as well as any enhancements she may want to do for the inn. Rory ends up a part of the 30-something generation which have to move back home after the real world fails them. Here we also realize how important Dean, Jess, and Logan are in Rory’s life to this day. Not to mention there are a few dance-and-song numbers, including the Tango, a musical which disturbs Lorelai and by extension us, and Carole King showing off her chops.

“Fall” really tied things together. All the Gilmore Girls find the catharsis they need to move forward in their lives. Maybe the picture isn’t what they thought it would look like, but if there’s one thing this story teaches us is that life works itself out in spite of our plans. Who would have thought that Emily Gilmore would have the gumption to write her own rules on living out her widowed life? Luckily Luke and Lorelai’s bumpy road ends with their happiness. However, here’s where Rory’s dad comes in to play. It is during the last 20 minutes of “Fall” during Christopher’s return when you may be able to figure out the infamous last 4 words before Rory and Lorelai speak them. Once you do, I’m sure everyone will agree we need another year with the Gilmore Girls.

Sound off Gilmore Girls fans. What do you think were the best, or the worst, moments of Gilmore Girls: A Year in the Life? Do you agree that there needs to be a Season 2?