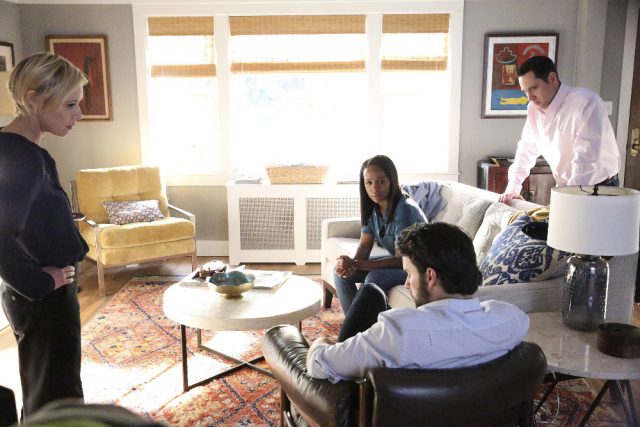 Wes is dead. Annalise is in jail. Laurel is pregnant. Everyone is sad.

The fall finale of How to Get Away with Murder was a huge episode that answered one big question while opening up so, so many more. Fans have been left in anticipation for weeks, but the show has finally returned from hiatus with what is sure to be a powerful back-half of the season. Let’s talk about what happened in the winter premiere, “We’re Bad People.”

Now that we’re caught up with the events of that fateful night (though we still don’t know how Wes died), Annalise is in jail. Unfortunately for her (but fortunately for the audience, as we get to see a great side of Academy Award nominee Viola Davis), she has to share her cell with two women. One, of course, taunts Annalise, but the other actually recognizes her from court, going so far as to call her a “badass queen.” It’s a pretty cool moment, but it reinforces the fact that Annalise is not currently in the best position of her life.

Bonnie, meanwhile, is trying to get everything worked out with everyone and discover exactly what went on. She’s convinced (of course) that Frank wouldn’t do any of this, but Laurel (also of course) blames him for everything. Bonnie convinces herself that Annalise has been framed, so we see her set out to find Frank and solve this particular mystery. Both Bonnie and Laurel are getting great material to work with during this storyline, and it reinforces how spectacular Liza Weil is specifically in this role.

The remaining members of the Keating Five also have to deal with Wes’ death, but they do so in a surprisingly light way. Light, that is, until Connor acts out in front of Laurel. This leads to a huge confrontation with Asher, and I love the way that Matt McGorry plays the character during this scene. Afterward, Connor and Oliver have their own big conversation, and it helps us see that everything he’s gone through over these past three years is finally starting to affect Connor in a major way.

In the end, Annalise ends up getting charged with Wes’ murder (largely due to some notations that Wes made on an immunity deal that we saw during the fall finale), and Annalise is is a worse position than ever. Frank, meanwhile, goes to see Laurel in the hospital, and it all ends with the reveal that he had a conversation with Wes not long before the latter’s death in the fire.

Overall, “We’re Bad People” has opened up so much for the rest of season 3 to explore, and I really can’t wait to see where the story goes from here. I’ll miss Wes, sure, but his death has created some great paths for How to Get Away with Murder to follow.

What did you think of How to Get Away with Murder‘s return from hiatus? Let us know your thoughts in the comments down below!

How to Get Away with Murder Season 3 Episode 10 Review: "We're Bad People"

Death is bad, but “We’re Bad People” uses it to its advantage to open up a plethora of avenues for this show to explore during the rest of the season.