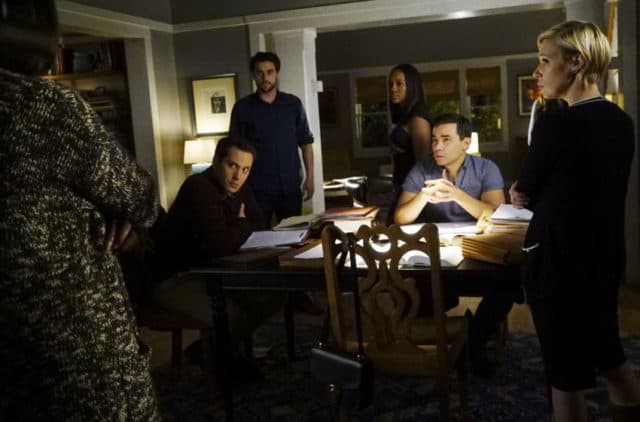 It’s finally time for the answers to the biggest mystery so far on How to Get Away with Murder: who killed Wes? Let’s take a look at the two-hour season finale of the show, “He Made a Terrible Mistake” and “Wes.”

So, remember, Connor was present at the house on the night that Wes was murdered, and this explains a lot of why he’s acted the way that he has during this back-half of the season. In the beginning of this finale, he even almost kills himself by stepping in the front of a bus, but (luckily) doesn’t. He’s really freaking out, despite Oliver’s attempts to console him, that he could be at least partially responsible for Wes’ death, and it’s sent him down a spiral. It’s been really great for the audience to see this level of performance, and it goes a long way to help redeem the character after some very shady actions that we’ve seen lately.

Atwood has continued to say that she didn’t order Wes’ cremation, and she finally stresses this on the stand, too. Because of this insistence, Annalise tries to use Nate to get more out of Atwood, and the result is a wifi password that allows Oliver to search through Atwood’s computer. Through this, he’s able to find a number that Atwood called on the night of the murder. During this time, Connor finally confesses to (for some reason) Michaela, and we see that, on that night, Connor really did try to revive Wes after going to the house via his instructions, but he had to rush to safety after seeing the gas leak in the room. It’s nice for us to see that Connor wasn’t responsible, but Laurel gets super angry at this reveal. Everyone else is able to chill, though, and Connor and Annalise agree to believe that they’re both innocent after a heated confrontation. These two actors, guys. They’re something special.

After heading to the doctor (and finally apologizing to Meggie) to hear the baby’s heartbeat (she still doesn’t know if she’ll keep it, though), Laurel returns to the house and agrees to tell Connor’s story on the stand to both get Annalise’s motion through and keep from incriminating Connor. Unfortunately, though, it’s revealed on the stand that Laurel perjured herself in court before in an attempt to help out her father, and she’s completely embarrassed while testifying. Connor finally decides to go to Denver himself and just admit to it (hoping to get the same immunity deal as Wes), but it ends up being the same time that Asher dials the mystery number that Oliver found. Surprise, that number leads to a burner phone in Denver’s office. This leads to a series of flashbacks where we see both a mystery man watch Connor run away from the explosion and Wes attacked from behind after being left by Nate.

Connor is tucked away where nobody can find him, and Denver isn’t admitting to knowing where he is after a brief confrontation with Bonnie and Asher. Annalise, meanwhile, decides to talk with Sylvia Mahoney (the wife of Wes’ dead father) about thinking the woman is responsible for the murder. It turns out, though, that it was Charles Mahoney, not Wallace, who was Wes’ father, and Sylvia is convinced Annalise is responsible for framing Charles. This is another major revelation from the finale that absolutely changes the game for this show.

After a lot of thought (and a look at the only photo of her deceased baby), Annalise decides to pin all of the murders she’s being investigated for on Wes. This works because the police will find a voicemail from Wes that absolutely implicated him in the murders, and the whole gang goes along with it (even if begrudgingly with Laurel). This works, and the charges against Annalise are dropped. Laurel, meanwhile, heads to take down Charles Mahoney with a gun, but she’s found by a man that she knows from her past named Dominic. As we learn here, Dominic killed Wes (in an extremely brutal way), and it was all on an order from Laurel’s father. Charles gets away unharmed and Laurel has to deal with this new knowledge about what her father has done.

All of this happened in an extremely packed and emotional finale (the final few minutes of the episode were killer), and it really moves the overall series forward in some major ways that I didn’t really expect. While the killer wasn’t really someone that we know, it’s clear that Wes’ murder is really just the start of things on How to Get Away with Murder, and it’s going to be a long wait to the start of the next season.

What did you think of the season finale of How to Get Away with Murder? Were the answers that we got satisfying? Let us know your thoughts in the comments down below!

How to Get Away with Murder Season 3 Finale Review: "He Made a Terrible Mistake"/"Wes"

In a jam-packed finale full of emotion, How to Get Away with Murder has set up a great season that should prove to be well worth the wait.