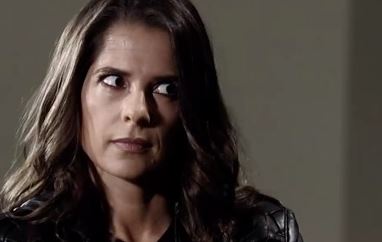 General Hospital fans aren’t sure what Sam is really mad about when it comes to Jason. She was married to this man for many years, he is the love of her life, yet she divorced him and married Drew who is not her husband even though she thought he was for so many years. It’s been a rough road, and we just don’t get what she’s so mad about Jason about. Look, he was kidnapped, held hostage, and he did what he could to get away when the chance came.

He cam back into her life to get her back, and he was just as shocked as she was all that had changed over the years with his twin. And she’s mad at him? For what? For being there? For being the man she fell in love with and actually married? What is she so upset about? We don’t know, precisely, but she is so mad at him it’s not even funny.

And today she’s going to lay into him about something else she’s not happy about, and we don’t know — as usual — what that might be. She’s always mad at him. Instead of just being happy he is alive and that things didn’t take him down after all, she should focus on that. But she’s not. She’s focused on being annoyed that he is alive and disrupting her life. And that’s not good for anyone. So what is she upset about today? We don’t know, but we will find out.