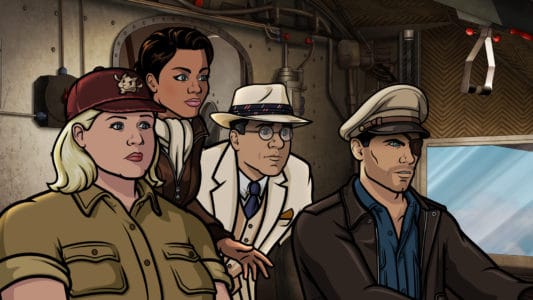 Archer: Danger Island, the ninth season of the Emmy-winning animated series, will premiere on Wednesday, April 25 at 10 PM ET/PT on FXX, it was announced today by Chuck Saftler, President, Program Strategy and COO of FX Networks.

Archer: Danger Island is an animated, half-hour comedy that centers on the semi-functioning alcoholic seaplane pilot, Sterling Archer, a lush on the lush South Pacific island of Mitimotu in 1939. While the rest of the world is concerned about the impending Second World War, Archer is only concerned with who’s buying his next drink. Along with his trusty co-pilot Pam, Sterling must navigate quicksand, cannibals, super-intelligent monkeys, poison darts, pirates, and did we mention quicksand? Welcome to the mysterious and deadly world of Archer: Danger Island.

Archer was created by Adam Reed and Floyd County Productions and is executive produced by Reed and Matt Thompson. It is produced by FX Productions. Archer: Dreamland, the series’ eighth season, debuts on DVD on Tuesday, March 20. Set in 1940s Los Angeles, Archer: Dreamland lands Archer on a quest to find his partner’s killer. Contending with mobsters, including notorious crime boss “Mother,” he’s also challenged by a sultry lounge singer, a deranged heiress, crooked cops, knock-knock jokes, and his own libido.