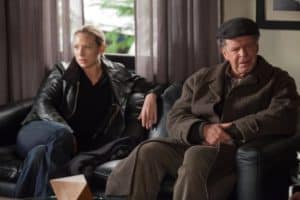 Tonight’s episode of Fringe marked the antepenultimate episode — although there’s only one more “Fringe Friday” left before the end. Next week, January 18, will see FOX air the last two episodes back-to-back in a special two-part series finale. “The Boy Must Live” definitely set the stage for what looks to be one hell of a send-off for Fringe. The last episode before the thankfully short winter hiatus saw Nina Sharp sacrifice herself so that the boy, Michael, could survive, and ended with the revelation that the mysterious Donald was everyone’s favourite Observer. In “The Boy Must Live” we learn that, due to September’s penchant for interfering and his bond with the Bishops, he was “punished” in the worst way the other Observers could conceive: they removed his implant, and in so doing sentenced him to live life as a mere human. Hopefully we haven’t seen the end of Donald just yet, especially with Michael’s inexplicable decision to turn himself over to Windmark’s forces.

The neuroscience geek in me is always intrigued when the Fringe writers bring certain elements into play, and tonight’s episode featured that in a big way. Donald explains that the Observers’ path started on February 20, 2167, when a researcher in Norway who was working on improving human intelligence found he could do so by rewiring the part of the brain involved in jealousy. While you obviously need to take information in science fiction with a hefty dose of salt, Fringe often makes a very good effort at rooting their stories in real research. One problem I’d had with the information on the Observers in “Letters of Transit” was that they supposedly traveled back in time from 2609 AD: less than 600 years is an unbelievably short period of time for an entirely new species to evolve out of humanity. But evidently those developments did not happen naturally, and the idea of areas of the brain being “rewired” is not as far out there as you might think — human brains have an incredible capacity for plasticity. It also makes sense that, no matter how advanced their understanding, the Observers weren’t successful in completely eradicating emotion, from September’s empathy to Windmark’s fixation with the Bishops to August’s capacity for love.

One of the longest-running themes in Fringe explores the lengths to which a parent will go to protect their child: in Walter’s case, literally tearing open the fabric between universes, unconcerned with the possibility of annihilating two worlds in the process. In September’s case, even though he was supposedly emotionless, he felt a bond to his anomalous son and could not let him be destroyed in the future. The conversation with Donald certainly clarified some 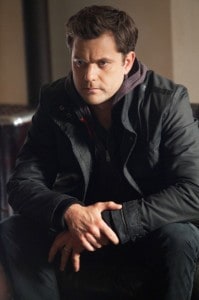 contentious elements from the mythology, especially with the revelation that September’s memorable instruction to Walter, “the boy must live”, referred not to Peter, as we’d all assumed, but to his own son. One problem in particular that I’d had with the timeline reset at the end of season 3 was the ambiguity and contradictions it introduced with regards to Peter’s significance.

In the episode “Peter” we see first-hand the events surrounding Peter’s death in the blue universe and subsequent abduction from the redverse: September triggers an error in the timeline when he distracts Walternate from saving Peter, causing Walter to cross over to save this alternate version of his son, only to be unable to give him up again. The implication being that, for September to have had any interest in the first place, the moment in time must hold historical significance for the Observers, and he had to correct the mistake by then helping Walter to save Peter. A mistake I’d made was in assuming that Peter was the boy who was supposed to live — which was where my confusion with the reset came into play. How could the Observers be fixing the timeline by removing Peter’s influence if he was supposed to live? For a being like September, who perceived time in a very different way, he may not have seen a problem with informing Walter about the aforementioned boy 20 years before he would even cross paths with Walter.

Joel Wyman — showrunner, executive producer, writer — has said several times that this final season is, in many ways, a love letter to the fans, which I thought came through loud-and-clear on tonight’s Fringe. Many complained last year that with the timeline reset, and the ensuing loss of the Peter-Walter dynamic, we’d lost the core element to the show that we love. While I can certainly appreciate the perspective, I also enjoyed the new facets to the characters that were explored. That being said, when Walter revealed to Peter that he now remembers their life together from the original timeline, it did make me teary. (And I don’t care if that makes me a sap!) In true Fringe fashion, now that the Bishop boys have been reunited, so to speak, the plan apparently calls for Walter to sacrifice himself. As much as I really, really don’t want to have to watch Walter die, it certainly feels like a fitting path for his character. Walter has always carried around a great deal of guilt, and it’s remarkably in-character for him to see this as the penance he must pay for the life he has lived — even if he’s also done a great deal of good along the way. 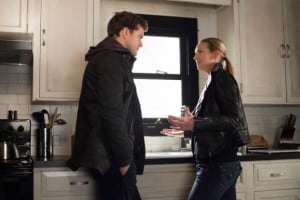 I was initially rather perturbed that Walter’s plan calls for yet another timeline reset, but the idea of this reset occurring in the future very much fascinates me — and makes my brain hurt a little bit, though you’d think I’d have gotten used to it by now with Fringe. In changing the direction of the Norwegian scientist’s research, Walter and Donald hope to alter the development of the Observers: to demonstrate that, as evidenced by the existence of Michael, there is a way to improve human intelligence without sacrificing the very things that make us human. The hope being that this alteration will prevent the invasion from happening in 2015. But what other impacts will this have on the timeline? Even though the science team to which September belonged was only supposed to observe events, clearly they interfered to varying extents. My mind initially made the leap that Olivia’s did: Peter and Olivia will get their little girl back. In fact, they will never lose her in 2015 in the first place. But who’s to say that the changes would stop there? Peter’s life might be saved as a boy in his own universe, with Walter never kidnapping him in the first place. The romantic in me likes to think that Peter and Olivia would cross paths eventually, especially given Olivia’s Cortexiphan-induced abilities and Walter’s penchant – in every universe and timeline – for challenging the laws of physics.

Even though I’m nowhere near ready to say goodbye to this show, I’m very much anticipating the finale next week. From the promo trailer, it looks as though we’ll get a suitably epic send-off that will probably break our hearts. I give major kudos to the writers of tonight’s Fringe for managing to address a big portion of the mythology while revisiting so many elements from the past! Grade: A