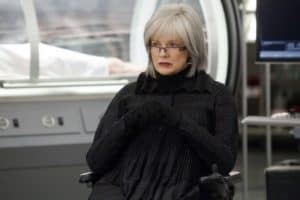 My only real complaint about Fringe season 5 thus far is that every week I find myself needing to correct my previous statements and say that no, this week’s episode just might be their best yet. “Anomaly XB-6783746” was no exception. I’m a little bit disappointed that we had to wait this long to see the incomparable Blair Brown truly carry an episode, but she delivered in a big way. Last night’s episode takes place the day after last week’s “Black Blotter”: following the retrieval of the Observer child Michael, the team enlists Nina’s help to try and figure out what’s special about the boy, and why he’s so integral to The Plan. Captain Windmark discovers Nina’s connection to the Resistance and “the Fugitives”, and the ensuing confrontation leaves absolutely no question as to where Nina’s loyalties lie. Nina dies rather than betray her family and the Resistance, and in so doing keeps Michael out of Windmark’s clutches. Michael finally reveals to Walter that the mysterious Donald, who was so instrumental in fighting the Invaders, is none other than the (former?) Observer September.

I’d be telling a bold-faced lie if I said last night’s Fringe didn’t wreak utter havoc on my emotions. If you’ve read some of my other reviews you’ll be familiar with my opinions on Nina Sharp, but the short of it is that I’ve always liked her. Our perceptions of Nina changed drastically throughout the series, and the fact that she 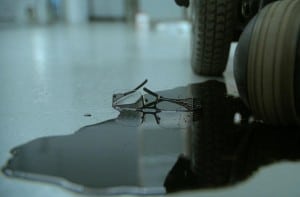 raised Olivia in this timeline wove her even more tightly into this disparate family. Olivia has lost a mother for the second time, and Walter a life-long friend. Nina offered a unique perspective in that she knows intimately how much Walter has changed, and what he stands to lose if he reverts wholly to the man he used to be. Nina was willing to take measures that Peter — understandably — balks at in order to preserve the man Walter has become over the course of the series.

As a consequence of Michael forging a connection with Walter, it appears as though Walter now has at least a couple memories from the original timeline: namely, Peter surviving the plunge into Reiden Lake, and encountering Michael previously (in Season 1’s “Inner Child”). This is only one of a few things that people are debating in the wake of “Anomaly XB-6783746”, which is made even more difficult in a show that tends to play fast and loose with the flow of time and the direction of cause and effect. The long-awaited reveal of Donald’s true identity was immensely satisfying, but, as always seems to be the case in Fringe, has introduced even more questions. My own supposition is that becoming Donald is the “unexpected” fate that befell September: an Observer “becoming” human would certainly be surprising and unanticipated. (And only on Fringe could a character having hair be such a shock!) Peter’s removal of the Observer implant demonstrated that it can be done without killing the subject, and allows for the re-expression of certain human traits. In September’s case, the changes to his cerebral cortex would be permanent given how long he wore the device, but he has always been a little more human than the other Observers. 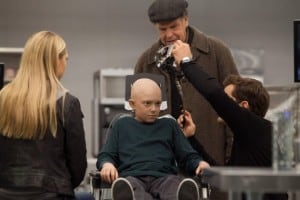 I did love the juxtaposition of Windmark proclaiming that Nina and the Resistance are “animals” for experimenting on an Observer and then casually discussing Observer policies for exterminating their own in the future. Not to mention the fact that they themselves experiment on humans. Off the top of my head, Simon Foster is a particularly memorable, gruesome example. Michael, the eponymous anomaly, was apparently slated for extermination in Windmark’s future, but mysteriously disappeared. One question I have is what makes these “chromosomal mistakes” such a threat? Michael’s empathy could certainly gain him Windmark’s disdain, but doesn’t justify murdering him. Evidently Michael somehow managed to travel back in time to 2009 where, in the original timeline, he encountered the Fringe team for the first time. I now wonder if September somehow had a hand in his disappearance: since Michael doesn’t have an implant of his own, he shouldn’t be able to move through time unassisted. Perhaps, even in 2609, there were individuals who disagreed with prevailing norms of Observer society who helped Anomalies. For all we know, humans still existed there in some form. Although, given the Invaders’ attitudes towards us and their preferred atmospheric conditions, it certainly would not be a pleasant existence.

Last night’s Fringe highlighted the kind of science that so endeared the show to me in the first place. Understandably, this season has seen less of a focus on investigating weird science-based happenings, but I’ve found the information about the Observers to be highly intriguing. The ECOG, electrocognitive translator, undeniably has its roots in Walter’s EEG helmet, which we first saw in season 1’s “The Ghost Network.” The devices function to translate the electrical activity in a subject’s brain into information that can be interpreted by a computer. The device that Windmark’s minions used on the glass in Nina’s office at the Ministry of Science harkens back to “The Road Not Taken”, in which Peter created a device operating under the same principles in order to find a Cortexiphan kid. These little details serve as nice touchstones to remind us that events of earlier seasons do still matter — even if they occurred in another timeline.

Walter’s plan may yet succeed, but at what point is it a pyrrhic victory? Arguably, we’ve already passed that point — though it certainly could be worse. If you watched the trailer for the final three episodes, you probably heard the key words that jumped out at me: reset the timeline. We’re no stranger to the concept in Fringe, and obviously there’s more to the plan, but I’m of two minds. One the one hand, I’d love for our characters to finally get a chance to be happy, to be able to exist without constantly having to fight, or sacrifice the people they love for the greater good: resetting the timeline could potentially make this happen. On the other hand, 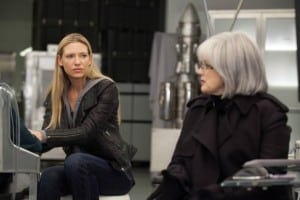 hitting the reset button might erase everything that’s happened in 2036, and I don’t want to feel as though this season has been pointless.

When Fringe returns on January 11, 2013 — no interminable winter hiatus this year! — the countdown for the final three episodes will begin. Something tells me there are emotions Joel Wyman et al. have yet to wring from our battered hearts… And for some reason, I cannot wait. Grade: A+