As you may have noticed there was no recap of last week’s episode of Fringe entitled ‘Stowaway'(you can read Sam’s review here) but this week I’m back so without further adieu, for your reading pleasure, here’s what went down on last night’s episode of the newly renewed Fringe. (YAY!) 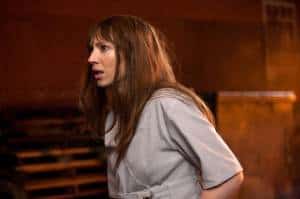 We’re back Over There in this week’s episode entitled ‘Bloodline’in an obstetrician’s office, where Fauxlivia is being tested for viral propagation eclampsia (VPE). Fauxlivia’s sister and niece both died during labor due to the virus which puts her at an increased risk for the condition. Worried that she could suffer the same fate, her mother goes with her for the appointment.

As she gets to her apartment building after the appointment, Fauxlivia can’t seem to escape the feeling that someone is watching her. She’s right of course as we see the observer across the street watching her enter the building.

On the phone with Lincoln, she discusses her concerns and a security detail is put in place. However, by the time they get there, Fauxlivia has already been kidnapped. Meanwhile we learn that Charlie has gone on a date with the bug lady, Mona (first seen in ‘Immortality’) and that Lincoln just may have a thing for this universe’s Olivia.

She wakes up in an indescript building with nurses and doctors surrounding her. While in and out of consciousness, she is hooked up to an IV and injected with some type of solution through her stomach. A moment later a machine with penetrating light is hovering over the incision and a sonogram is shown on a glass plate beside her.

Back at division, Alt-Astrid is on the job to find out what or who could have known about the trackers the kidnappers took out of Fauxlivia to take her. She mentions a car has drove by Fauxlivia’s apartment multiple times. So much so in fact, that it is a statistical anomaly.

This car is Henry’s taxi. You know Henry? The cab driver who helped our Olivia escape over there to come back to our universe. He expresses his worry for ‘Olivia’as she didn’t recognize him last time she saw him and as he puts it you can’t really forget about ‘another universe’when you’re told about it.

Lincoln and Charlie are at a loss. Hearing what Henry is saying but not fully understanding, they realize that Charlie was right 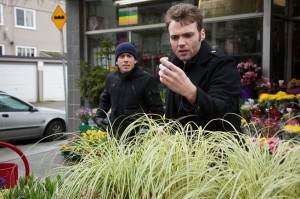 before, the Olivias were switched. As the new head of Fringe division, Lincoln goes to Walternate and explains Henry’s story. Walternate tells him the truth.

Could she have been taken by invaders of the other side? Lincoln asks. We as the audience know this is not likely but Walternate plays this card well as tears glisten in his eyes and he pleads with Lincoln to find her and his unborn grandson.

The doctors who took Fauxlivia are accelerating her pregnancy and Fauxlivia is desperate to get away. She tells the nurse of her condition in an attempt for her sympathy and help in escaping. Unsuccessful in connecting with her, she makes a run for it.

In the streets of Chinatown Olivia is in pain. Fully pregnant, she is beginning to experience labor pains as she attempts to make a break for it. She is found writhing in pain in the middle of the street and surrounded by a crowd by Lincoln and Henry.

They bring her in an empty store and it appears to be a touch and go situation as Henry delivers the baby.

Lincoln and Fauxlivia are both emotional as the experience is happening. Holding her in a tight embrace, he tells her to ‘just focus on this moment right now.’

He finally admits his feelings and tells her he loves her and she asks for him to promise he’ll save the baby. Reluctantly he agrees as he realizes she may not make it through this. For a split second after the baby is born, we see Fauxlivia lying still appearing to have passed on.

She takes a short breath. Henry and Lincoln are relieved as mom and baby both appear to be all right.

At the hospital, we learn the accelerated pregnancy actually enabled Fauxlivia to have the baby, as the virus couldn’t replicate fast enough to harm her or the child. 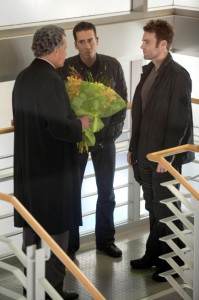 After learning all this information from Henry about the other Olivia, and running into Walternate on the stairs at the hospital, Lincoln and Charlie ponder what else they don’t know about their universe. After all, AltBroyles did disappear around the same time that Fauxlivia came back.

And in the final moments of the episode, the baby’s blood sample is given to Brandon in the hallway as the Observer is looking on and suspiciously says’It is happening.’

Brandon gives the blood sample to Walternate. It appears he was behind the kidnapping all along. While he may be vehemently against experimenting on children to get to his end goal, we are left unsure whether this includes his own grandson.

Fringe will be taking a short 3-week break before it’s final push to the SEASON finale! And it feels so nice to say SEASON finale instead of the anticipated and feared SERIES finale! Check out the official press release on the Season 4 pickup and Jasika Nicole’s (Astrid) reaction!!

To hold you over for the short in time, long in anticipation break, you can also check out Nadine’s review of ‘Bloodline’here.

Don’t forget to let us know what you thought about last night’s episode in the comments below! Did it have you rooting for both universes to survive? What do you think about Walternate? How about the Lincoln/Fauxlivia development?