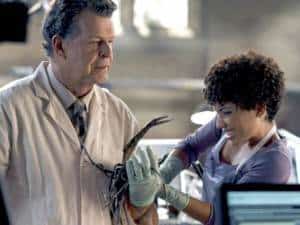 A soaken wet Chinese man stumbles into a warehouse, clutching his stomach. Another Chinese man – a doctor or scientist, who is obviously waiting for either Man#1 or someone else, puts on a pair of rubber gloves. Man#1 collapses on a cot and little wormies come out of his nose. Something is alive and moving inside his stomach. A bunch of what looks to be little snake heads erupt from his mouth. Ew.

Dorchester Bay Inlet. Olivia waits for Peter and Walter to arrive. Peter gets there first and informs her that Walter is exerting his independence and will be arriving separately. Walter pulls up in a cab and berates Peter for following him because Peter doesn’t trust him. Peter’s argument that they took the same route because they had the same destination holds no water with Walter.

Broyles tells them that they have over two dozens dead bodies that came off a Chinese freighter. They were presumed drowned until things started crawling out of their mouths. Walter pulls one out of a body and it looks like a cross between this and a squid. He orders it sent to his lab. Another agent yells from down the beach that they’ve found a live person.

The Chinese doctor pulls the thing from the dead man and drops it in a tank with several others. The dead man is the only one who made it off the ship.

Olivia talks to the survivor (Mei Lin) via a translator, whom she ends up not needing because Peter speaks Cantonese. She says that she is from outside Hong Kong. On the boat ride over, the men in charge gave everyone seasickness pills, but she didn’t take hers. She begs Olivia for help – her husband and daughter are on another ship and will be arriving in two days.

Back in the lab, Astrid and Walter weigh another thing. This one is over 7lbs, the biggest one yet. Walter confirms Peter’s theory that the capsule could have contained a larva for the creature and that the humans would have acted as the host. Olivia wonders why someone would want to smuggle these creatures into the country. The hypothesizing stops when Broyles reports that he has a copy of the ship’s manifest.

The Chinese doctor pulls some kind of tumour or gland out of a dissected creature. He dries it, grinds it, and packages the resulting powder.

At the FBI building, Broyles tells Olivia and Peter that they found a suspect burning papers related to the ship. Peter looks at the man and uses his tattoos to identify him as part of the Sung Hi Chinese triad. This organized crime group known for smuggling drugs, but not people. Peter says that some organisms secrete opiates, and this still could be drug smuggling. While they try to determine what is going on, the suspect regurgitates a razor blade and slits his throat in the interview room. (Those rooms are dangerous.)

Walter has determined that the parasitic worms are full of narcotics. He tries to hold one while Astrid draws a sample but the worm bites his arm. Astrid struggles to get it off but Walter is quite enjoying the bite – the venom is somewhat narcotic, and we all know how Walter enjoys that. Broyles arrives with the news that John Su is linked to a shell company that the Triad uses and that the FBI is starting to track the shipments. 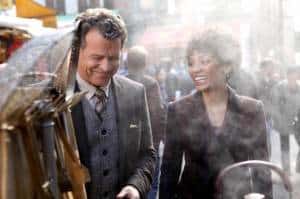 Beacon Hill. Olivia and Peter arrive at a very nice house to talk to Elizabeth Jarvis, a woman who has invested in the shipping lines. She tells them that it was an investment suggested by her financial planner, nothing more. Peter notices a ton of hand sanitizers, air filters and hermetically sealed windows.

After being bitten, Walter’s white blood cell count is through the roof. Walter suspects this side effect is deliberate and that is why the creatures are being smuggled into the country. If intestinal hook worms can be used to treat asthma, the creatures were created to boost immune systems. Walter thinks they should check out herbalists shops that sell hook worms. Peter asks for the list but Walter gets defensive; he’s a big boy and can do it all by himself.

Olivia talks to Mei Lin, who doesn’t recognize the photo of the dead Triad member. Her only concern is her family…

who is still on the other boat. A little girl looks at her fellow passengers and sees that one person’s stomach wriggling.

Peter goes back to Beacon Hill and talks to Elizabeth’s teenaged son Matt. Matt admits that he has the immune disorder. He gets monthly treatments and is due to get another one soon.

Walter is having a gay old time in Chinatown. He spots Astrid as he comes out of one of the shops on his lists. He is upset that Peter had him followed; all he wants is to live his life with a semblance of self-respect. Astrid apologizes. Walter forgives her and they go to the next shop together. Walter finds a shop (run by the mysterious Chinese doctor) which sells the worms he’s looking for. He jokes with Astrid that his worms are 4 feet long. The shopkeeper/doctor reacts but says nothing. Outside, Walter sends Astrid to get him a drink, and she falls for it. He disappears and some bad guys watch it all go down.

Astrid calls Peter to tell him that she lost Walter. She’s returning to the lab to see if he went home. She gets there and stumbles upon two men trying to steal the creature/worm. The bad buys are much bigger than she is.

Walter tries to call Peter from Chinatown but he can’t remember Peter’s phone number. He remembers all the digits, just not the order they go in. A kind older woman approaches him. 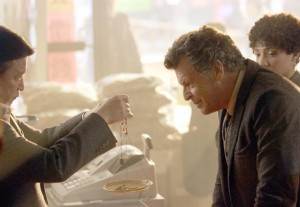 Peter and Olivia rush into the lab and find Astrid unconscious and bleeding on the floor. Peter gets a call from the woman saying she found Walter. Peter rushes to pick up his father. He tries very hard not to explode when Walter tells him about forgetting the number but can’t stop himself from lecturing Walter. He purposely put his contact information on a piece of paper in Walter’s pocket – didn’t he remember? Sadly, Walter admits he didn’t. They thank the lady and leave.

On their way to the car, Peter asks Walter if he remembers which stores he visited. Of course not, but this list Walter kept. Store #3 had a good selection of worms, but not as good as his, Walter remembers. He exaggerated when he said his worms were 4 feet long, really they were only 2. Peter realizes that the shopkeeper must have ordered his men to follow Astrid after hearing this. Walter is upset at this news and wants to know what happened to Astrid.

Thanks to a tip from Elizabeth Jarvis, Broyles and Olivia storm the other boat but they are too late; everyone is gone. Olivia calls Peter with the news but he tells her he already knows. He is outside Herbalist Shop #3 and the bad guys are there. He orders Walter to stay in the car while he investigates.

Peter picks the lock to the herbalist shop. He finds a back room where several people are gagged and tied down to cots. Across the room, the doctor prepares to cut one of the worm creatures out of a man stomach… while he is conscious. Peter tries to free the person but is caught. Two goons hold him steady while the doctor tries to force a larva down his throat.

Fortunately, Olivia and calvary arrive to save the day. Peter spits out the larva.

They return to the lab. Astrid is very glad to see Walter; she thought they lost him. Walter looks shocky. She tells him not to worry, they can clean up the lab. Walter is distraught when he gets a look at her beaten face.

At the hospital, Broyles tells Olivia that the survivors are doing well. Unfortunately, there are at least 6 more immune-deficient patients that were being treated. And the man they were looking for was a front; he doesn’t exist. It’s bad news but Olivia still takes a moment to peek in on Mei Lin and her husband and daughter.

Walter wakes Peter up in the middle of the night. He’s been out of the hospital for a year and wants to get his life back. But he knows that sometimes he will still get lost. So, as a compromise, he tells Peter than he as implanted a transponder in his neck so Peter can always find him. 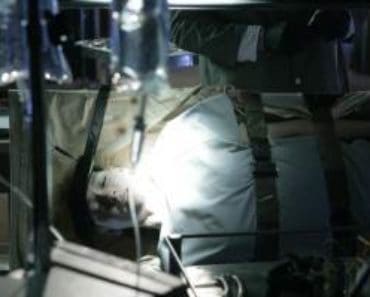 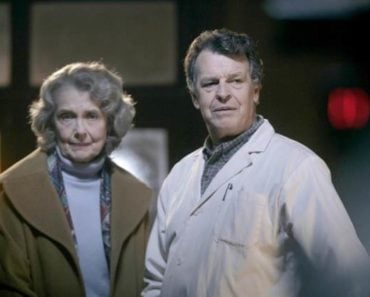 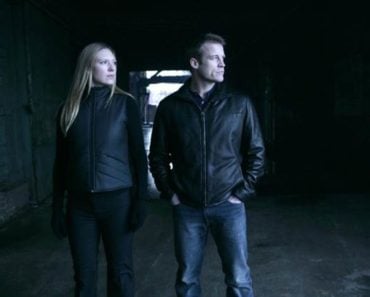 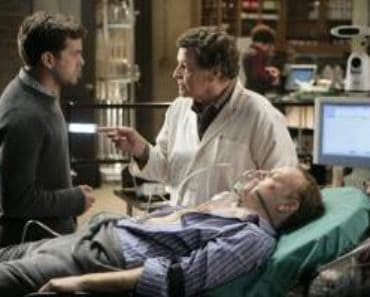 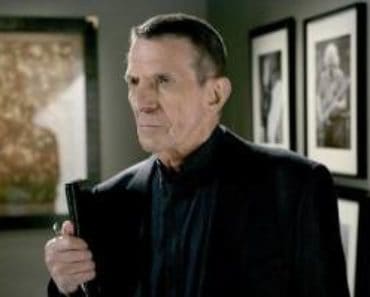 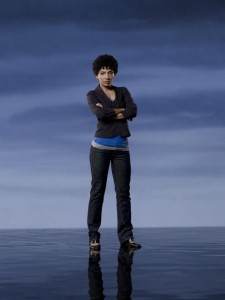