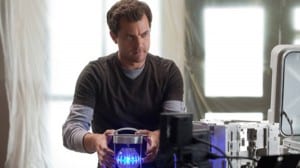 Last night’s Fringe episode saw our team struggling to move forward after Etta’s death. While packing up some of their daughter’s belongings, Peter and Olivia receive a call from Anil, the leader of this chapter of the Resistance: not only had they captured an Observer, but they also retrieved a mysterious cube that was in his possession. Anil reveals that the invaders periodically open up a wormhole to their future that acts as a shipping lane to send technology back to 2036. The Observers need the components to complete their machines which will permanently alter the Earth’s atmosphere to better suit them, while reducing the human lifespan to about 45 years. Walter and Peter deduce that by destabilizing the wormhole on our end, it could theoretically create a black hole in the future and cause mass destruction. Peter, against the wishes of both Olivia and Walter, gives himself over to revenge; blinded by his need to avenge his daughter’s death and spurred on by their failure to destroy the shipping lane, Peter kills the captured Observer and inserts some strange piece of future-tech into his own head.

Given the final scene of “An Origin Story”, my biggest question for next week is: what effect will the Observer’s device have on Peter? Before I muse on that, I feel the need to point out that for such an intelligent guy, that was a pretty stupid move. I understand that Peter is, as the Observer pointed out, being driving by his emotions, but Peter has absolutely no reason to think the device wouldn’t kill him as soon as he stuck it in his head. In fact, given that the Observer just proved that Peter’s conclusions about them were wrong, he has no grounds to assume that their brain physiology is even similar enough for the device to function properly. That being said, I’m curious as hell to see what new abilities might manifest in Peter. At the very least, it might just level the playing field. I was reminded of The Matrix: not just by the burrowing piece of technology, but perhaps Peter, like Neo, will no longer have to dodge bullets. 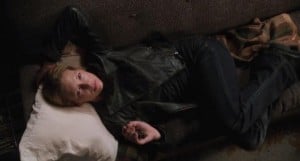 My assumption is that the eponymous “origin” is that of the Observers: Peter has, essentially, become the first Observer, chronologically speaking. But this invokes the same kind of paradox as last season’s “Making Angels”, which featured a poison that could only be created if you already knew it existed: Peter’s “becoming” the first Observer requires that they already exist with their technology.  But given that this is Fringe we’re talking about, I’m sure there are some implications to the episode title I’m just not seeing. The notion of perception and reality has been a long-running theme in Fringe: humans are flawed, in a sense, because our beliefs about reality are determined by what we perceive, and our perceptions can be wrong. Even as we take in the world around us, our expectations and mind-set alter the information to which we attend, and so bias our view of reality. As the captured Observer points out so accurately, “you don’t even know what you don’t know.”

Ever since Fringe began, the Observers have been, to quote Churchill, “a riddle, wrapped in a mystery, inside an enigma.” We learned that the Observers have shown up at significant events throughout history, that they exist outside of time, that some of them can feel very human emotions, that they can dodge bullets and read minds, and that they were scientists. Last night, we learned that the origin of at least some of the Observers’ powers is their technology. And even though this removes some of the mystique shrouding these characters, I do find it more plausible than the notion that humans evolved into beings with such powers. Joel Wyman, the showrunner of Fringe, certainly wasn’t joking around when he said we’d get more answers this season.

Even as the shroud of mystery surrounding the Observers has thinned, there is still one aspect to their existence that I do not understand. Up until “Letters of Transit”, the Observers had one directive: do not interfere. And when they did, the others acted to undo their influence and set events right. Invading the world, however, is about as far from non-interference as it’s possible to get. This has puzzled me because, although there have been exceptions, Fringe tends to excel at keeping to the rules they’ve created for themselves. Events and revelations will be shocking, yet still make sense within the context of the show. So why did the Observers’ prime directive change? I’m beginning to wonder if the scientific team, the Observers who travelled back in time to observe significant events, knew all along that this would happen. Perhaps the reason December was so intent on rectifying September’s mistake was because it changed the world that they meant to take over. If the two universes were fighting a battle caused by Walter abducting Peter, the world wouldn’t be stable enough for the Observers to invade. Although perhaps it is simply due to the Observer Effect, wherein the very act of observing a phenomenon changes it: their actions in the past changed the future, and so led to an invasion. 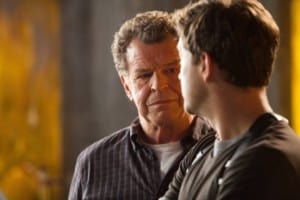 Emotionally speaking, this episode was about the fallout of Etta’s death. This season, Fringe has excelled at marrying mythologically-significant events with in-depth explorations of our characters and their relationships with one another. Walter, having lost his own child, is not only dealing with the loss of his granddaughter, but with his son and surrogate daughter’s pain. In his grief, Walter nearly destroyed two universes with his willingness to travel between worlds, and now his son’s actions may be no less significant. In this way, Peter is like both of his fathers: both Walter and Walternate were unable to let go of their children, and Walternate, at least in the original timeline, set his universe on a path of war in order to avenge his son. Olivia, on the other hand, seems overwhelmed by her grief. Although she has “always been the strongest”, it feels like Olivia has finally hit her breaking point; she’s trying desperately to hold on to the only things she has left, but Peter’s actions could tear them all apart. Again.

With eight episodes left in Fringe, which will culminate in a special two-part series finale, there’s no predicting what will happen as we go into the final stretch. Etta’s death in “The Bullet That Saved the World” showed us that no one is safe. Even if our team does manage to rid the world of the Observers, what will the cost be? I, for one, am on tenterhooks. All I know is that if the level of production we’ve seen so far this season continues, Fringe will go out with one hell of a bang. Grade: A