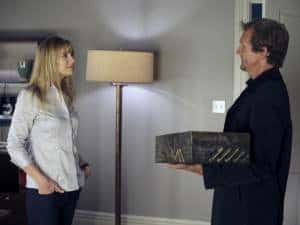 Fringe is that kind of show that you absolutely love or you absolutely hate. For the past couple of years it has become sort of a cult show, in which it has a small, but completely devoted fan base. Obviously, I’m on the love side of the fence and I have to say that, even though Fringe hasn’t always been the greatest show in the past, it has now evolved into not only the best show on television today, but into something that lots of other shows try really hard to do, but fail most of the time: it keeps us intrigued.

That in itself is no small feat.

This week, we were treated with a very interesting episode. ‘The Box’brought us back to classic Fringe mode, which means we’re back to a procedural show. Not that that’s necessarily a bad thing. Not at all, in fact. My fellow writer Sam McPherson kind of disagrees with me in his review, but ‘The Box’was like being back to a familiar territory — literally speaking, since this episode took place in our universe — and at the same time it had this taste of something completely new and exciting, because now we have a new element in our universe and that is none other than Fauxlivia. I do admit I like her, even though she’s a heartless, evil impostor. Major kudos to Anna Torv, who is kicking some serious butt playing these two characters. The differences between Olivia and Fauxlivia are so subtle that it’s not surprising that no one has even begun to suspect anything is off with her yet.

This week, the case revolves around a box that somehow kills people. It starts with two men digging up the box out of the basement of a house in Milton, MA, while a third member of the group keeps an eye on the family — gagged and tied to chairs — that lives there. The two guys retrieve the box and they decide to open it. As soon as they do, they go into a sort of vegetative trance which ultimately kills them. Strangely, they die in the exact position they were in when they opened the box. One of the men, for instance, was standing up and that’s how he died and stayed on his feet afterwards. Mind bending, isn’t it? The third man, however, is not affected by whatever the box does and, after finding his accomplices and the family dead, he runs away with the box.

Back in Boston, Fauxlivia visits Newton, who gives her files on everyone important in Olivia’s life: the Bishops, Astrid and Broyles. He also removes her tattoo while she browses through a pop culture book. When she inquires about Bono Vox and comments on his good looks, Newton warns her that she can’t let this world fool her; after all, they were the ones who started the war. Fauxlivia reassures him she’s well aware of which side she’s on and reminds him that she’s leading this operation and therefore he has to do as she says. Then she asks him if he did what she had asked him to do and he says that he has sent a team to the site, but not his usual men.

At the lab, Walter is trying to make Gene, the cow, produce chocolate milk. Astrid reads William Bell’s obituary from the newspaper, while Peter and Broyles discuss the blueprints of the device Walternate wanted to use to destroy this world with Peter’s help. Broyles is concerned about what the machine can actually do, but Walter says maybe they should leave it alone as to not cause any more damage. 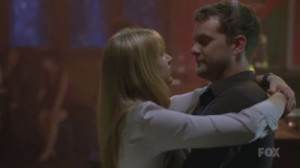 Later, Peter and Fauxlivia go to a bar for a few drinks and he confides in her that he feels like he’s trapped inside a bad cop movie. Fauxlivia says that she agrees with Broyles and thinks they should investigate what the machine actually does. Then the song ‘Crazy’by Patsy Cline starts playing and she says that she loves that song. Peter is surprised because Olivia has never expressed any interest in music since he has known her. Fauxlivia says that being over there put a little perspective in everything and she has been noticing a lot of things since they have been back. She asks him for a dance and he takes her to the dance floor.

With arms around each other, they talk about over there and the alternate Olivia, but a phone call interrupts them. The bodies in Milton have been found and the Fringe team is called in. Walter examines them, but still has no idea how they were killed. They quickly figure out there was a third person in the group, since what they had dug up is gone.

Fauxlivia goes to Newton and says they’ve got a problem. The device was supposed to be there, but wasn’t. Two of his men died as he had planned, but someone got away with it and ran with the device. Newton says he only hired two men and that no one could survive that thing. Fauxlivia tells him that there were three and they need to find this third person and fast.

Meanwhile, Astrid and Walter are examining one of the victims’brains and I have to say it is quite disgusting. Walter, on the other hand, is nervous about something else. He is about to go to the reading of William Bell’s last will and testament at Massive Dynamic. Peter takes him there and after the reading, Nina Sharp receives a letter and a bell from a villa in Tuscany where they spent time together, while Walter receives an envelope, but won’t tell Peter what is in it. When they’re on their way out of Massive Dynamic, Peter gets a call from Broyles asking about Fauxlivia’s whereabouts. She was supposed to go to Blake’s — one of the victims — apartment, but isn’t answering her phone. Peter is surprised she went without telling him and goes after her. 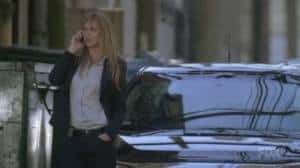 When he gets there, Fauxlivia justifies saying that she knew it was a big day for Walter and she didn’t want to impose. After they figure out that Blake lived with someone, Fauxlivia asks him to check the apartment one more time and leaves with the excuse of having to talk to the landlord. Instead, she leaves the building and calls Newton, giving him the address.

Back at the lab, Astrid asks Walter how the reading of the will went and he is nervous and upset. He shows her what Bell left him: a key to a safety deposit box and a letter that says don’t be afraid to cross the line. Walter says that he was always the cautious one of the two and look where crossing the line got him. Astrid asks if he has talked to Peter yet about what happened and he says he hasn’t found the right moment yet. She insists that he must do that as soon as possible and that Peter needs to hear his side of the story. Walter suddenly notices that there is severe damage on the inner ear of the victims — talk about changing the subject, right? — and now he thinks he knows what happened. To prove his theory, he monitors his brainwaves as he is listening to music. While harmonic music reduces neural activity, upbeat tunes increase it. So Walter thinks that the stolen device emits an ultrasonic sound that increases brain activity until it induces a vegetative state before killing the person. 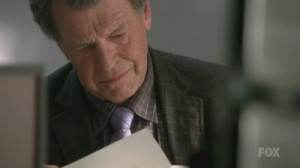 With this new information, Peter says he’s going to call Fauxlivia to fill her in. Walter follows him into the office and asks him if he could have a moment. He tries to explain what he did — kidnapping him and bringing him into this universe and whatnot — and tells Peter he loves him and if he had to, he’d do it all over again. Peter tells him he’s not prepared to have that conversation yet and leaves.