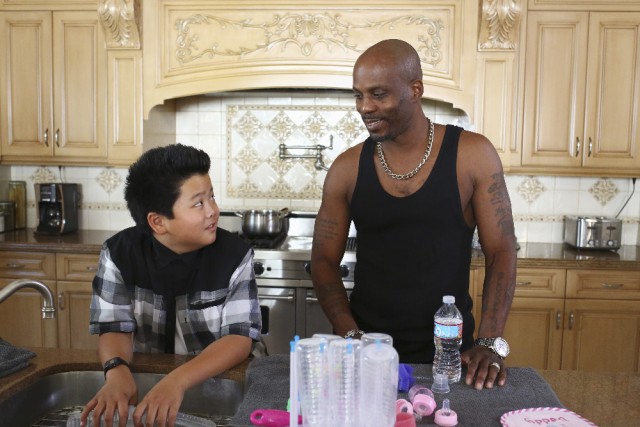 Fresh Off the Boat‘s dynamic characters make it an extremely versatile comedy: it can navigate the many genres it intersects with ease, thanks to a fully-realized ensemble bringing every setting to life. Cattleman’s Ranch, Eddie’s school, Jessica’s career; all of these settings have so many well-developed personas, it can be hard for Fresh to find its priorities in any episode that isolates the family members. “We Done Son” is one of those half hours, an episode with three individual plot lines about the value of friendship; a trio of stories that are amusing and insightful in their own context, but feel a little weightless when bunched together across a single 22-minute episode.

There’s just not a lot of room for conflict to develop in “We Done Son” away from Honey and Jessica. Their friendship is an important cornerstone of the show, so it’s natural I wouldn’t care about Eddie’s girlfriend whose name I can’t remember, or a DMX appearance that makes absolutely no sense given the show’s timeline (I’ve ranted about this with Boyz II Men before; you bet I was pissed when he showed up in 1995). Frankly, their argument over Jessica’s dismissal of Honey’s ideas turns quite ugly, and doesn’t quite fit in with the tone of the rest of “We Done Son,” which is a noticeably lighter affair with Eddie or Louis (mostly due to the presence of DMX and JB Smoove as guest stars in the episode).

“We Done Son” never takes the time to develop the mentor/student relationship Eddie forms with DMX, a story that tries to turn a hokey celebrity cameo into something ironically funny, and meaningful to Eddie’s budding relationship with Allison. Except there’s no room for the necessary legwork to be done for those moments to matter: Eddie and DMX are just all of a sudden friends, just like it’s suddenly Allison’s birthday, two events the episode really could’ve built to in more convincing ways. Not even a black-and-white shot of Eddie, DMX, and Genesis rolling down the straight in an El Dorado can save this story, like a wilting, underdeveloped tulip in DMX’s horticulture ro- ok, you get the terrible simile, let’s just move on.

Louis’ “escapades” with his old business partner feels equally underdeveloped, again trying to focus on a relationship we know nothing about, when the fate of a much more important friendship hangs in the balance. The lesson for Louis in the episode is quite simple, offering a fairly rudimentary (and therefore lifeless) “fish oil salesman buddy” story, with literally no twist on the character, or the story it’s telling. Barry is a cypher for simplicity, the kind Fresh Off the Boat is superior to: we know from the word go that Barry’s no more successful in 1995 than he was in the past with Vitamin Luscious (which sounds disgusting), and also that Louis has no money to invest with him anyway, since so much money is tied up in Jessica’s suddenly-defunct business with Honey. Is it funny when Fresh reveals Barry was pitching eBay to Louis? I guess there’s a laugh to be had there, but there’s really nothing preceding that joke to anchor it in the morality of the episode, which is that Barry is a terrible friend. There’s no stakes to the story at all: again, with Jessica and Honey’s fight getting uglier with each new scene, there’s nothing comparable for anyone to invest in between Barry and Louis, on any level (including financial).

That being said, the Honey/Jessica material is fantastic. Honey’s really broken out of the trophy wife cliche she was in season one: we’ve watched her struggle to bond with her stepdaughter, show some serious ambition in finding a career, and develop a love for Stephen King novels; seeing her stand up for herself when Bulldozer Jessica begins to take over their business might be the most satisfying Honey moment of all, though. This is Honey’s showcase, first and foremost: while the episode does the perfunctory scenes of Jessica resisting the guilt she feels, it’s really about Honey establishing herself as an equal in the friendship, a very empowering move for any character who tries to stand up to Jessica Huang.

Without Honey’s arc at the center of “We Done Son,” this would’ve been a pretty low point for Fresh Off the Boat‘s awesome second season; the Eddie and Louis material never comes together, what humor we do glean from them pretty much contained to simple ironies (DMX likes flowers!) and recurring jokes (“Why’s everyone gotta say what the necklace don’t do?”). But this episode is really about tightening the bond between Honey and Jessica, and it feels like “We Done Son” knows it, delivering a wonderfully cathartic story about friendship at its core, letting the secondary plots exist in the meaningless margins, where they can’t affect the weight of the terrific main story.