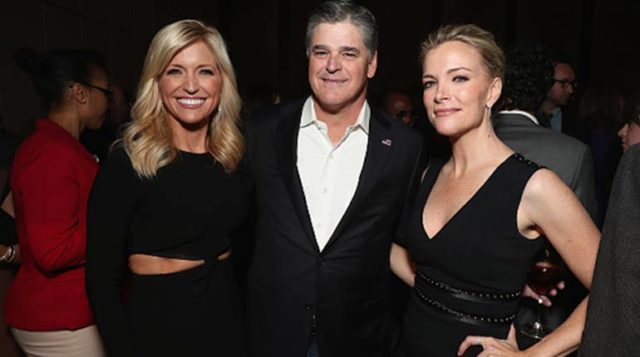 Jill Rhodes was born on August 27, 1962 in Alabama. She received her Bachelor of Arts degree in Journalism from Alabama University. Rhodes was working as a political columnist for the Huntsville Times in 1991 when conservative radio talk show host, Sean Hannity, called her and asked her to advise him on interesting story ideas. Hannity hosted a talk show for a Huntsville, Alabama radio station. The couple met later that year and were married in January 1993. The couple have two children, Patrick and Merri Kelley. The family lives in Oyster Bay, Long Island, New York and have a home in Naples, Florida.

She moved to New York with Hannity

Hannity was born and raised in New York City. He attended New York University and moved to Santa Barbara and attended school while working at a radio station. From the start of his career, Hannity made a name for himself as a conservative political commentator which was at some times controversial. When his radio contract expired, he began working at a Huntsville, Alabama radio station where he met his future wife. Jill followed Sean Hannity to Atlanta, Georgia where he helped launch Fox News. He moved his family to New York where he co-hosted Fox’s “Hannity and Combes” and “The Sean Hannity Show”. Jill Rhodes worked as a book editor in New York before the couple began their family.

Jill continues to work with her husband

Jill Rhodes has always been her husband’s closest advisor. He dedicated his first book, “Let Freedom Ring: Winning the War of Liberty Over Liberalism” to his his wife. Jill currently works as an editor on his Fox show “The Hannity Show”. Since the departure of Bill O’Reilly and Megyn Kelly from Fox last year, Hannity’s show has become the conservative station’s evening staple.

Jill Rhodes continued to stand by her husband during accusations of sexual harassment. Beginning in 2013 rumors began to swirl that Sean Hannity and major contributors to Fox had sexually harassed women working at the station. Last year, Fox chief Roger Ailes and commentator Bill O’Reilly left the station over revelations of sexual harassment. Hannity was accused by Debbie Schlussel, a conservative blogger, of inviting her to his hotel room, and when she refused, blacklisting her from the cable television station. Rumors that Rhodes and Hannity were headed for divorce proved to be untrue.

It’s not surprising that Sean Hannity who was a leader in the Birther Movement against then President Barack Obama, and has been outspoken about the LGBT community would continue to stir up controversy. In fact, Hannity has called himself a television personality more than a political commentator. Hannity is well known for his ties to President Donald Trump. Recently, Hannity was named as a client of Trump’s controversial attorney Michael Cohen. More recently, Hannity claimed that his retention of Cohen is tied to real estate deals which has stirred up more controversy. Hannity took out a $2.5 million loan on the family’s Long Island home to invest in real estate. Since the 1990’s Hannity has invested in a Georgia based real estate company that has set up 20 shell companies to purchase nearly 900 properties in 7 states. Jill Rhodes continues to quietly support her husband through all of the controversial moves he makes. She has let it slip that she intends to move to the family’s Florida home permanently once her children are in college.